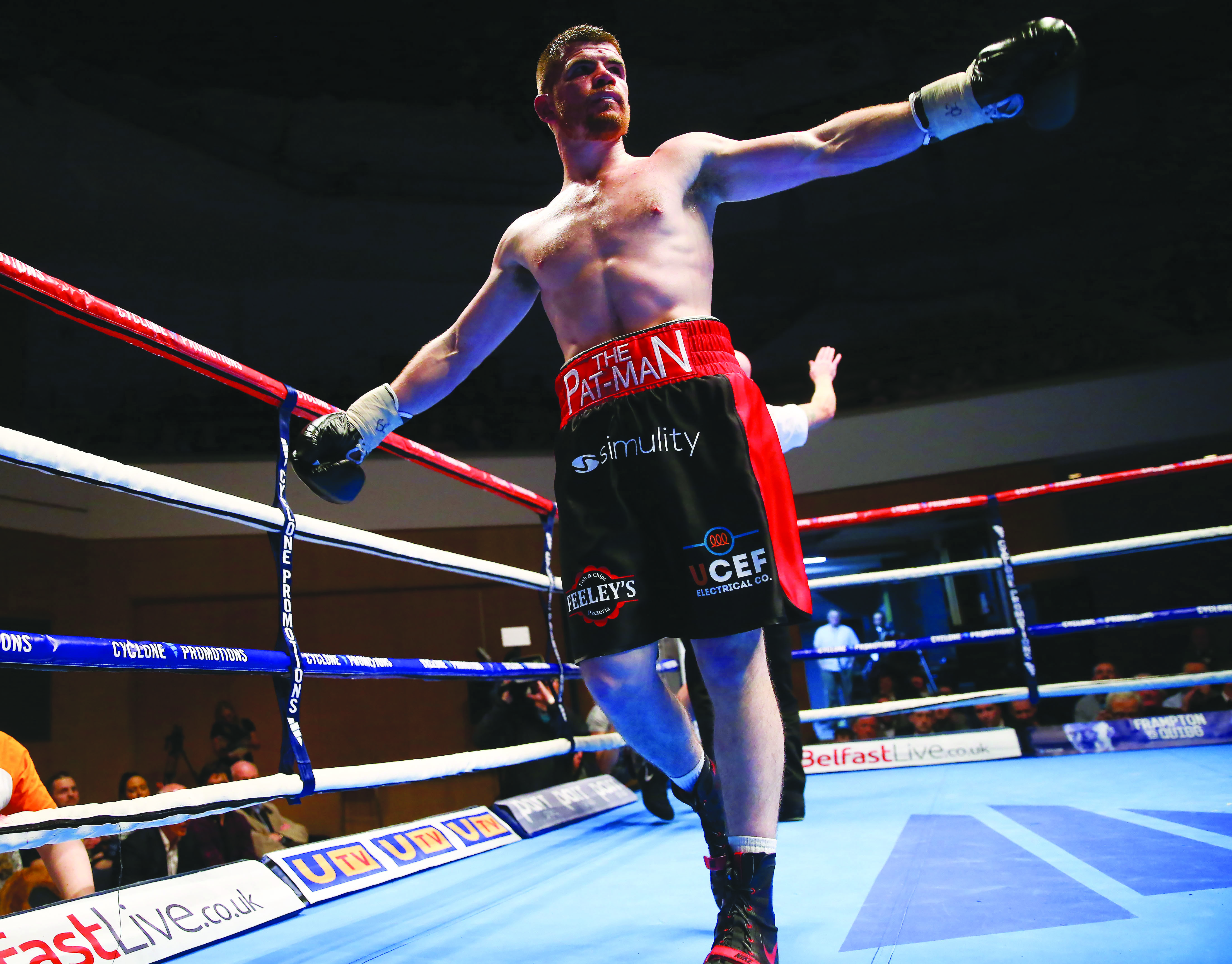 PADDY Gallagher says he is ready to take his big opportunity on Saturday when he takes on Tony Dixon for the vacant Celtic welterweight title at the Ice Arena in Cardiff.
The 27-year-old Lenadoon fighter has had something of a start-stop career as a professional, but victory over the dangerous 7-0 Merthyr Tydfil man could really see things take off.
After losing in the final of Prizefighter in April 2014 – despite suffering an earlier defeat in the competition to Erick Ochieng who was forced to withdraw and ‘Pat Man’ reinstated – Gallagher set about rebuilding his career under the tutalege of John Breen. He’s won all four contests since, but now wants to really put himself in the mix on the domestic scene with victory at the weekend.
“This has been a long time coming,” he said.
“I was supposed to have title fights before and then they fell through. Then there was the whole Prizfighter fiasco that could have led to something good, but it didn’t work out.
“It’s great to get this chance now, so I am looking to make the most of it. I’m very confident going in so hopefully this will take me further on.”
Dixon comes to the ring with that perfect record – two by way of stoppage – and both men have a common opponent in William Warburton.
Twice Gallagher defeated the Englishman on points but was unable to dazzle in doing so against the tough journeyman.
It was a similar story for Dixon who was forced to dig in against the awkward Warburton. Gallagher believes nothing can be read into performances against a Lancashire man who makes life incredibly difficult for whoever he’s facing.
“Some people have watched him fighting Warburton, but I’ve only seen bits and pieces,” said the 9-2 West Belfast man.
“You can’t judge anything when fighting him because he is a different kettle of fish.
“From what I know he (Dixon) likes to fight and have a tear-up.
“He fights as though he is a big banger, but with two knockouts in seven wins I’m not sure he is. We will see how that is this week.”
While Dixon’s record suggests he isn’t the biggest puncher, Gallagher also acknowledges his game isn’t based around one-punch knockout power.
However, last time out against Tomas Bartunek at the Waterfront Hall, he had the Czech down twice before eventually stopping him late in the fourth – the second time with a monster right that had Bartunek almost out before he hit the floor. So the local man certainly carries decent power.
“I’m not a devastating banger,” he admits.
“I do have a bit of a punch and have the potential like the last fight. In my career I have had 11 fights and I have had stopped people to the body and head. I have potential in both hands to knock you out, so you never know, let’s see how it works out.
“A couple of rounds in and he might start getting tired, so if he does he will know all about it.”
Gallagher says his preparations have gone perfectly for this fight, which forms part of the undercard to the IBF bantamweight title fight between Lee Haskins and Ivan Morales in the Welsh capital.
The main event will be broadcast on Channel 5, but the undercard to the Sanigar-Cyclone co-promotion goes out live on Spike TV and Gallagher says this gives him a great chance to announce himself – something he’s eager to do in style to help propel his career on to the next level.
“I’ve been training flat-out for this and I’m ready to rock,” he insists. “I can’t see me not winning. I suppose if you go into a fight thinking you are going to get beat, then you’re nuts.
“I have trained hard and have done everything I need to win in this and I truly believe I am better than him. This is going to be live on Spike TV so if I win, then it will give me that extra exposure and I might get and eliminator or even a shot at another title.”