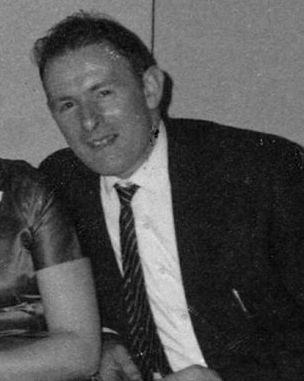 FATHER: Patrick McVeigh was gunned down 50 years ago

THE daughter of West Belfast man, who was gunned down by a shadowy British Army unit, has called for an apology ahead of his 50th anniversary.

Patrick McVeigh (44) was gunned down by the Military Reaction Force (MRF) at the junction of Riverdale Park South and Finaghy Road North on 13 May 1972.

Mr McVeigh had stopped to speak to unarmed members of the Catholic ex-Servicemen’s Association, who were manning a civilian checkpoint.

Plainclothes members of the covert MRF shot four men standing near a junction, killing Patrick McVeigh and wounding the others. The unit also shot and injured a fifth man walking on the other side of the street.

Research by the charity Paper Trail revealed that the MRF was linked to at least nine shooting incidents – the majority in West Belfast – between May and June 1972. Amongst these was the killing of mother-of-two Jean Smyth-Campbell on the Glen Road, and Daniel Rooney in the St James' area.

In 2020, seven former British soldiers were referred to the Public Prosecution Service as part of an investigation into the MRF.

Patrick McVeigh's 50th anniversary occurs this Friday. His daughter, Patricia Mills (née) McVeigh, called on the unit's Commanding Officer to "do the decent thing by apologising to our family".

"Truth and Justice mean so much to us," she said. "Our dad was just the best – a good husband and a great father. He worked hard to provide for six children and gave us wonderful holidays. We had a magical childhood. I am now 70 but rarely does a day pass when I don’t think of him. I loved him so much.

"Patrick McVeigh was gunned down by soldiers like on a turkey shoot. His death literally tore our family apart. Two of my brothers had to leave Harland and Wolff for work in Germany after the army press office justified the shooting with the false claim that my father was a 'gunman'.  Our mother left Belfast for good to get away from the Troubles.

"Over the last 15 years, I have been shoved from legacy pillar to legacy post. First the Historical Enquiries Team, then the Legacy Investigation Branch, then a long delayed report to the DPP, then an application for a new inquest which won’t be heard until 2023 if we’re lucky, and now, as a last resort, civil proceedings, which the government’s latest legacy proposals want to close off.

"To leave legacy victims with no avenue for legal redress at all is unconscionable.

"On Friday my mother, my brother and I will visit my father’s grave and pledge again that we will continue the fight to clear his good name. We will never surrender that principle."