Paula thinks South Belfast can be won for Alliance 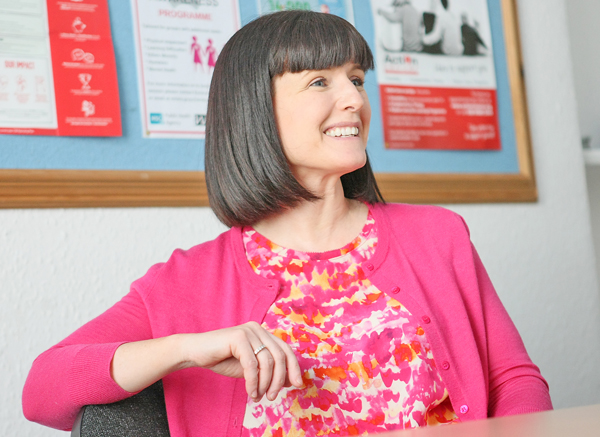 WITH voters being asked to return to the polls for the fourth time in a year the South Belfast News met up with Alliance South Belfast candidate Paula Bradshaw.

Paula has been selected by her party to run for the Westminster seat in the upcoming General Election. We met up with her at Alliance headquarters to talk to her about the upcoming challenge.

The first thing we asked Paula was why she thought Teresa May had called this snap election.

“I think she has a lot of very tough decisions ahead and she needed a strong majority behind her,” she said. “I also think she saw a weakness in the Labour Party and the results that came through from the local government elections are proving that.

“I also believe that there was a degree of opportunism because they are now saying that there will be fixed terms, which I think is unfair for a lot of MPs who are trying to do good work who may now lose their seats and won’t be able to deliver on it.”

With Alliance continuing to increase their vote in South Belfast, we asked Paula if she believed she was in with a realistic chance of becoming the new MP.

“This is one of our target seats, as they are called in the political world, and we are giving it everything we can. We started off trying to get our initial message out there over the last week and we are now knocking doors. We are going to put all our efforts into it. We know it will be a difficult election, this is a constituency that the media are always interested in because it’s very mixed, but again our message is that only an Alliance MP can reflect the diversity and the cross community nature of the constituency.”

What does she think are the big issues for the diverse and mixed South Belfast area?

“I think it’s mostly dismay with Brexit approaching. With my background as the health spokesperson for the party I’ve also been talking a lot about the potential problems for the Health Service in terms of recruiting and training qualified staff from across Europe, this is going to be a massive issue.

“We have been trying to make sure that the migration policy is right for Northern Ireland as part of the Brexit negotiations. I was with a group of newcomer families and they are very worried about what’s going to happen with Brexit.

“Part of the beauty of South Belfast is that we are very welcoming and our newcomer families enrich the constituency so much. The last thing we want is for them to be worried and leave, it would be a huge loss for the community.”

Still on the issue of Brexit, we asked Paula if she had any regrets about the Alliance Party not being part of an anti-Brexit pact that might have seen more pro-EU MPs returned?

“We were very clear why we didn’t want to go into it. The problem with it was that it was termed an anti-Brexit pact, which is fine, but it was starting to divide along sectarian lines and we have our own particular message. We are certainly pro-Europe, we are a progressive party and we would be a party that take our seats. The key will be all 18 MPs, regardless of whether they abstain or take their seats, is that we all work together for the best deal for Northern Ireland. I don’t think that any of the MPs who are returned won’t be trying to do that.”

Paula added: “The decision has been taken and we are respectful of the democratic decision, we will be pushing for another referendum when the final exit deal has been negotiated. Whatever happens we have to get special status or special arrangements for Northern Ireland.

“Going back to health, there are some brilliant initiatives now taking place around children’s health, cancer research and around the new graduate medical school in Derry and we can’t have any barriers whether they’re at the border or in terms of jurisdictions.”

With the majority of voters in the north voting to remain, we asked Paula if she feels that the implications of Brexit will be the big issue this time around for voters as opposed to the usual orange and green voting?

“People are very traditional voters in the sense that a lot of people do have their own party. Our initial message is that we are pro-Europe so some people have said, ‘Well, I voted Alliance but I also voted to leave’ so we just need to make sure that people know that Alliance are their party and we will work for them.”

Alasdair McDonnell has been the MP for South Belfast since 2005, we asked Paula how she feels he has performed.

“I think he has to stand on his own track record and the electorate will decide on that. What we are hearing at some doors is that maybe it’s time for change. As our campaign goes on we will continue to highlight what the difference will be between the current MP and what we would have to offer. He talks about his own track record and that’s up to him to sell that to the electorate in this election.”

We asked Paula if she thought there was a case to be argued that going to Westminster is a waste of time for our politicians as there are only 18 of them as opposed to the 650 MPs from across the water?

“A lot of the bread and butter issues are now devolved to the Assembly in terms of health, education and roads. At the same time this is going to be a really important mandate and parliamentary term in the sense of obviously Brexit and everything that flows from that. There are also issues around overseas development and aid, the Home Office and especially in the South Belfast constituency providing a voice for all those newcomer families whether they are from the EU countries or further afield. In a constituency like South Belfast it’s very important to provide a voice for them. Defence and international relationships are important in terms of how we continue to work closely with our neighbours. Pension and welfare are also important issues.”

With the June 8 election fast approaching Paula is remaining positive.

“If we don’t win it’s still a great opportunity to get out and engage with the electorate, we are always building the party and our votes continue to rise with every election.

“Obviously we would have wanted the talks to have been successful. I was on the Irish language and cultural working group during them, we were going off before Easter and I really thought we were close to a deal. There was still a bit to go but I was hopeful. I would love for the Assembly to be up and functioning and for the committees to be meeting as opposed to being on the campaign trail again, but that’s politics. It’s never straightforward and nothing is guaranteed.”