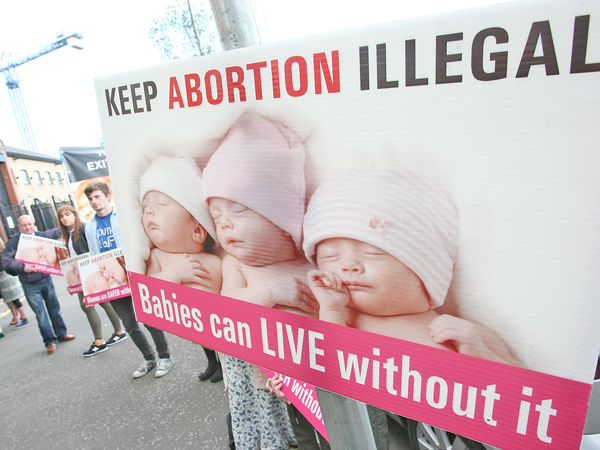 Abortion remains a divisive subject in the North

THE north’s leading pro-life group Precious Life say they are celebrating a ‘massive victory’ after it was announced the Marie Stopes clinic is to close its Belfast office.

The office, which opened in October 2012, will close its doors on Friday after the government moved to fund abortion for women in the north in England.

Marie Stopes said the closure will enable them to focus its resources “so that Northern Irish women can better access funded treatment in England”.

Director of Precious Life, Bernadette Smyth, said: “We are celebrating this massive pro-life victory. When Marie Stopes opened in Belfast in 2012,

Precious Life made a vow to close the door on Marie Stopes. For the past five years, Precious Life has maintained a pro-life presence outside the office – sacrificing many hours in reaching out to abortion-minded women, thus saving countless lives.

“This closure of Marie Stopes Belfast is all down to the dedication, commitment, and hard work of Precious Life volunteers.”

“While I am saddened that this local provision has ended, the clinic achieved so much in the past five years by providing reproductive healthcare so vitally needed here, but also in keeping the abortion needs of women and girls in Northern Ireland on the political agenda,” said the Green Party representative.
“The fact that women and girls from here can now access abortion in England for free has clearly impacted on the service. I am proud of my time as clinic escort and to have been part of such a transformative movement.
“While the Public Prosecution Service has now stated clearly that they can see no risk of criminal prosecution for NHS employees in Northern Ireland who refer women to NHS hospitals and clinics in the rest of the UK for abortions, I have written to the Permanent Secretary of Health Richard Pengelly asking him to update me on the Department’s progress on providing guidance to GPs on the new access provided in England with regards to free abortions and ensuring a clear pathway for women accessing abortion from Northern Ireland in the rest of the UK. As yet I have not received a satisfactory answer.
“The presence of the clinic in Belfast reminded us that the current abortion regime is cruel, unnecessary and is totally out of step with public opinion.
“What Marie Stopes Clinic began, the NHS in Northern Ireland must now continue.”