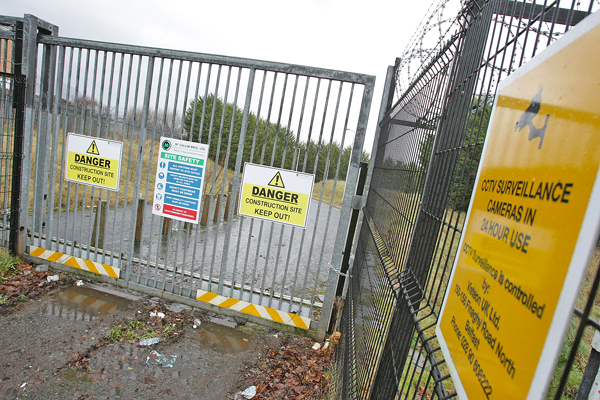 Protective clothing will be worn on Visteon site visit

FEARS over the safety of land at the former Visteon plant at Finaghy (right) remain after it was revealed that the Planning Appeals Commissioner will have to wear protective clothing when undertaking a site visit.

Residents from the Campaign For Economic Regeneration, supported by SDLP Councillor Tim Attwood, appeared at the Planning Appeals Commission (PAC) on Tuesday to formally oppose Fold Housing’s appeal to change conditions relating to the development of commercial buildings at the former Visteon site.

He went on: “It was then stated that the PAC Commissioner would be required to wear protective clothing when undertaking a site visit based on advice from the Health and Safety Executive, this some 18 months after the site has been cleared.”

The Andersonstown News reported back in April 2014 that a report on soil at the site, where Fold Housing want to build 244 homes, found that toxins there posed “potentially unacceptable risks” to human health.

The analysis was carried out by a unit of the Northern Ireland Environment Agency, the Land and Resource Management Unit. The report noted the presence of a range of toxins, including asbestos, metals, hydrocarbons, polyaromatic hydrocarbons and volatile organic carbons.

Cllr Attwood said it is “vital” that “residents and workers are given assurances about the levels of contamination on the site and the health and safety risks posed to them.”

Cllr Attwood added that he along with the residents’ group “strongly defended” the conditions stipulated by the Planning Committee which require the construction of the business and commercial of the housing development. It is these aspects of their housing plan that Fold are seeking to change.

“We argued that successful neighbourhoods need mixed-use regeneration developments which includes social housing, community facilities and significant economic space. Although we would have preferred a larger economic footprint, it is vital that conditions which include the construction of commercial units are maintained.”

Cllr Attwood said Fold Housing argued at the appeal that there was a lack of commercial tenant demand in West Belfast, based on an updated report by commercial real estate agent Lisney Belfast. “We highlighted the recent development of the Innovation Factory on the Springfield Road opening in October as an example of a pioneering, creative business space. There are already seven tenants in occupation and a further six have signed up.”