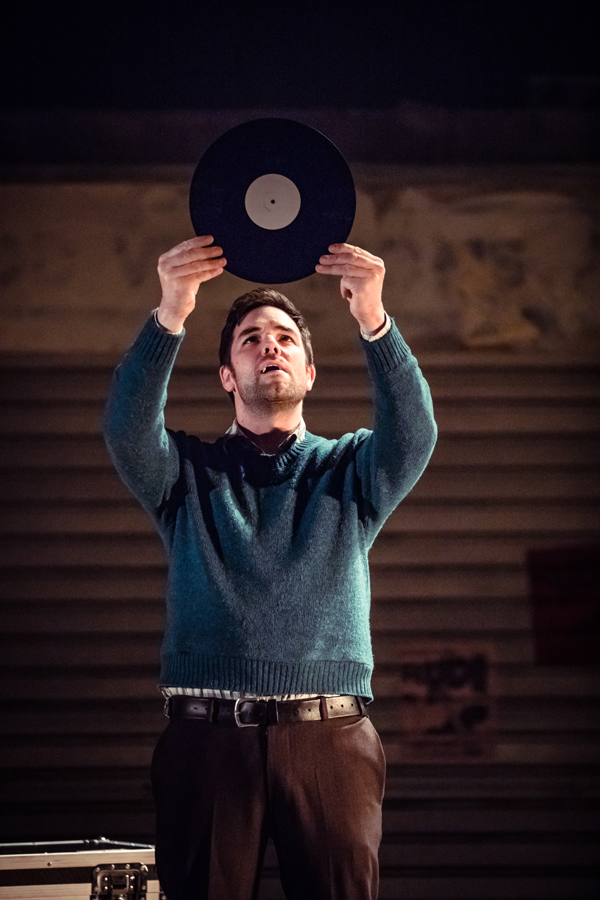 Aaron McCusker brings the story of Terri Hooley to life

BRIGHT red tartan and oxblood Dr Martens filed into the Lyric Theatre on Sunday as a packed auditorium took their seats for Good Vibrations.
The story of Terri Hooley and Belfast punk, based on the 2014 Bafta-nominated film, makes a seamless transition from stage to screen as we learn how one man decided he just wanted to open a record shop on ‘the most bombed half-mile in Europe’, play his music, smoke a few spliffs and get local music heard.
Shameless star Aaron McCusker swaggers on to the stage portraying Terri “with an i”, all open-necked shirt, bottle green pullover, overcoat and flares. Despite the Troubles shutting down parts of the city, he is determined to play his headline slot in the Harp Bar even if it means playing to an audience of one. It’s here that Terri meets his wife Ruth, played by West End star Niamh Perry, and the two try to build their life together, as Terri becomes distracted – all too easily – by trying to passionately promote the latest band to come on the punk scene as he turns promoter for Rudi and The Outcasts.
If anyone during Sunday’s afternoon matinee was expecting a leisurely retrospective they were in for a rude awakening as this is a gloriously full-on production of music and song with all-star cast in full, fine voice, all playing instruments and giving it the heap.
Every audience member is with our protagonist as he goes across the water, copious copies of seven-inch vinyl under his arm as he tries, most of the time in vain, to try and get snooty English music executives to listen to a band from Derry called The Undertones and their debut song Teenage Kicks – a song so iconic that John Peel did the unthinkable and played it twice on Radio One.
With every high comes the inevitable low and we witness how Terri releases the band from the Good Vibrations label for “£500 and a signed copy of a Shangri-Las record”.
With a marriage falling apart, mounting debts at the record shop and next to no revenue, a fundraising concert at the Ulster Hall sets the scene for the rousing finale and our lead’s poignant rendition of Sonny Bono’s Laugh At Me.
A standing ovation gave way to the ‘national anthem’ as the raw opening bars of Teenage Kicks started up and the audience sang every line back to the cast.
Good Vibrations is a must-see – simple as that. The amount of energy fizzing off the stage is infectious and the cast of ten are exceptional. A transfer to the West End must surely follow.