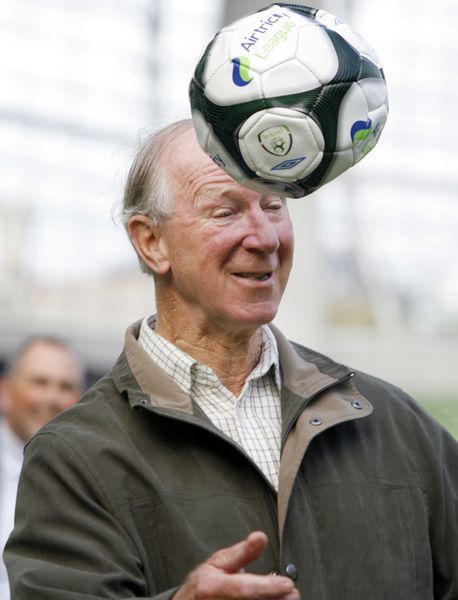 THE West Belfast Ireland Supporter’s Club is calling for a statue to be erected of Jack Charlton at the Aviva Stadium in Dublin.

The 85 year-old, who passed away on Friday took charge of the Republic of Ireland national football team in February 1986, leading them to two successful European Championship qualifications and their first ever World Cup in 1990.

The FAI is deeply saddened to learn of the death of Jack Charlton, the manager who changed Irish football forever.

Our thoughts are with Pat and the family at this sad time.#RIP pic.twitter.com/PonuRtW9fu

At Euro 1988, Charlton oversaw a memorable 1-0 win over England with the West Belfast Ireland Supporter’s Club formed on the back of his impact.

In their first ever World Cup, Charlton led the Republic to the quarter-finals in a tournament which gripped the whole country which continued in the USA in 1994 with another memorable victory over Italy in New York.

The club have launched a petition calling for a statue to be erected in memory of the great man.

Club Secretary Paul Loughrain said: “This petition is made with the hopes to commemorate Jack Charlton and everything he has done for Irish Football.

“Jack lifted the nation and changed the way we look at Irish football today with the great memories he gave us in the summers of 88, 90 and 94.

“Commemorating Jack with a Statue in his honor at Lansdowne Road would be a wonderful addition and I'm sure welcomed by every Irish football fan.

“Jack is a legend of Irish football and an honorary Irishman.

“What he did for the team, for the sport and for the country made us all fall in love with him and with football again.

“His impact went much further than the football pitch. He was a natural born leader and we think he deserves a lasting tribute.

“We will be working with the Confederation of Republic of Ireland Supporter’s Clubs to pursue this.”