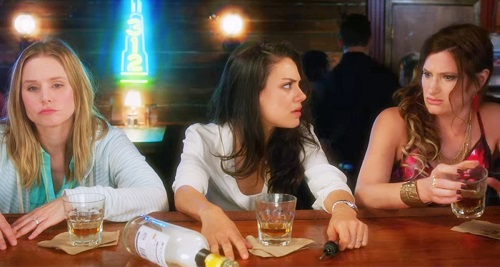 FUN: Bad Moms will provide a good night out at the flicks

AMY (Mila Kunis) has to be one of the most devoted and perpetually busy mothers in the world. She’s always on the move and, when she’s not cooking her family delicious and nutritious meals, she’s dropping the kids off to school while en route to a busy and stressful job. In short, Amy does everything while her useless husband does nothing.

Cracks
So, when Amy discovers that her hubby is being unfaithful, she cracks and, joined by two other moms, the uber busy Kiki (Kristen Bell) and freewheeling party animal Carla (Kathryn Hahn), the trio decide to let their hair down and have fun for a change. However, Amy’s nemesis Gwendolyn (Christina Applegate), the uptight and bitchy leader of the local PTA group, is not happy with Amy’s change in attitude and does everything in her power to teach Amy a lesson.

Directed by Jon Lucas and Scott Moore, the two writers responsible for The Hangover movies, Bad Moms pretty much does what it says on the tin, and not much else. It’s an easy win for Lucas and Moore who delighted audiences with a bawdy, boisterous tale of what happens when the boys are let loose in Las Vegas. With Bad Moms, it’s the girls’ turn to let it all hang out and get a little crazy.

Muscles
As with Bridesmaids, it’s refreshing to see a movie that allows the ladies to flex their comedy muscles and, although the plot has more padding than a Wonderbra, it’s the performances that save Bad Moms from being, well, bad.

Mila Kunis is an absolute joy as the overworked and stressed out Amy and, when she decides that she’s had enough of being the responsible mother all the time, she rebels against convention with glorious abandon. Likewise, the excellent Kristen Bell and the hilarious Kathryn Hahn light up this movie with their zesty, fiery energy and Hahn in particular certainly knows how to deliver devilishly deviant and downright naughty dialogue.

All in all, it’s a very simple premise and, for all the boozed up craziness and riotous rebellion, there’s also a little glimmer of sentiment amid the bawdy antics.

A LIGHT and amusing comedy with a wicked side, Bad Moms will not be winning many awards, but it will provide a few giggles for the girls on a night out to the flicks.