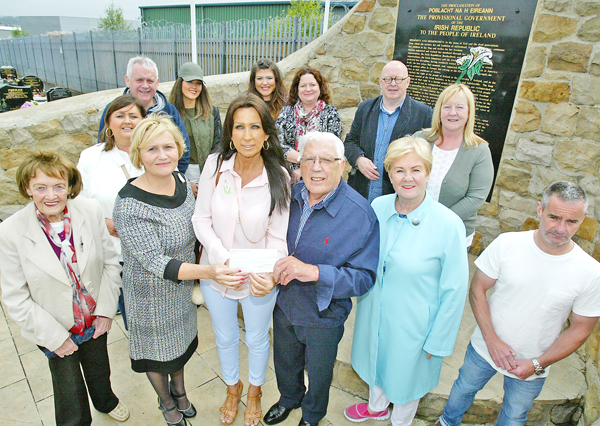 Women from the Still Imprisoned Project who presented Dessie Kennedy and representatives of the National Graves Association with a cheque towards the cleanup of the Republican plot in Milltown Cemetery.

THIS Saturday marks the rededication of the Republican Plot in Milltown Cemetery.

Joe Austin, Chairman of the National Graves Association, said  all the relatives of the 70 Volunteers who are buried in the Republican Plot are invited to join them for the rededication.

“It is tradition that after a republican plot has been closed for renovation or to repair damage caused that we rededicate it.

“It will be a very moving ceremony, a combination of pageantry as well as a reminder that it is a plot, there are graves here, it is not a monument and hopefully it’s the beginning of the process for Milltown and for the ’72 plot.”

In May of this year the Andersonstown News reported that the Republican Plot in Milltown had been vandalised for the fourth time in five years.

Loyalist graffiti was sprayed and wreaths were removed in the attack, with Bobby Sands’ headstone being spray-painted over.

Joe Austin said: “These repairs took many thousands of pounds and we are extremely grateful to those supporters of the National Graves.

“We would also like to thank the builders, the work took just over three weeks, some of it was quite complicated and had to be done very sensitively.

“A lot of the work that had been undertaken could have been done at a quicker pace but it would have meant the absolute closure of the of the plot as opposed to partially closing it.

“The builders carried out the work with great expertise and great sensitivity. The people who made the contributions are the ones who made this happen.”

Joe added: “We don’t have the address and contact details for all the relatives as some have moved away. We would like to take this opportunity to invite them all this Saturday at 12 noon.”