Reds pay the penalty in Dungannon 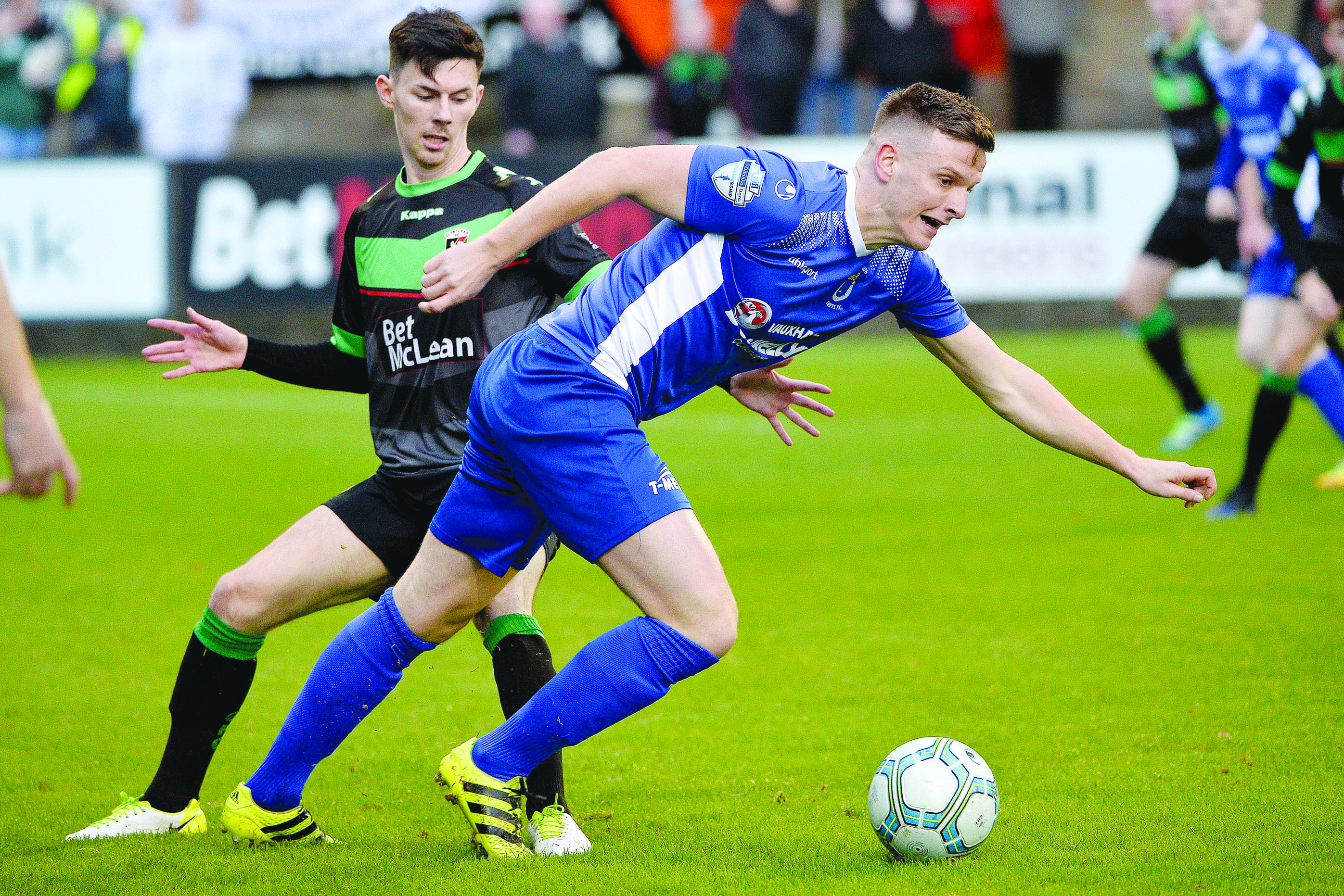 Dougie Wilson scored the winner from the penalty spot Inpho

DOUGIE Wilson’s converted penalty five minutes from time condemned Cliftonville to their second league defeat of the season after a 2-1 defeat to Dungannon Swifts at Stangmore Park on Tuesday evening.

Wilson had the Swifts ahead in the opening half and in truth, Cliftonville should have found themselves further behind after a dismal opening 45 minutes. But the North Belfast side pulled level before the hour mark through a sensational Garry Breen free-kick.

It was an open game in the aftermath and looked to be heading for a stalemate until Breen was adjudged to have handled Lorcan Forde’s cross into the box and replacement referee Niall Gallagher pointed to the spot.

Swifts' captain Wilson thundered home from 12 yards to ensure a first win of the season and leave the Reds counting the cost of a poor showing.

Hosts Dungannon carved out the first opening after Dylan O’Kane fed Rhys Campbell whose shot was deflected behind for a corner.

On 21 minutes, the offside flag cut short the Swifts’ celebrations as O’Kane found the net with a shot from the outside of the foot.

On the half-hour mark, the Reds’ best opportunity fell to substitute Daire O’Connor after Thomas Maguire fizzed in a dangerous low cross but O’Connor’s shot on the turn was blocked by O’Kane covering his defensive duties.

The deadlock was broken within 60 seconds and it fell to Dungannon. Lorcan Forde was afforded too much room to whip a dangerous ball across the area where Dougie Wilson was waiting to fire into the empty net and give his side a 1-0 lead at the break.

Dungannon picked up where they left off before the interval as Michael Carvill was slipped in by Kris Lowe, but a perfectly-timed challenge from Ryan O’Reilly averted the imminent danger.

Ryan Curran was inches away with a bicycle kick at the other end but the Swifts should have doubled their lead through Caolin Coyle whose initial shot was parried by Richard Brush and Coyle hammered the rebound high and wide.

The game was level just before the hour-mark from an unfamiliar source with the set-piece as Garry Breen hammered a free-kick high into the top corner giving Swifts’ goalkeeper Sam Johnston no chance in the process to make it 1-1.

Conor McMenamin then let fly with a viciously struck shot that had Johnston scrambling to turn the ball away.

Dungannon had a few half-chances in the last 20 minutes. Dougie Wilson floated a free-kick over the bar from a promising position and then Lorcan Forde fizzed in a dangerous cross and glanced wide after the ball was played back into the area.

Ten minutes from time, ex-Cliftonville striker Daniel Hughes snatched at a high ball from the edge of the area and it failed to trouble Brush.

On 84 minutes, the Swifts had a glorious chance to restore their lead when Garry Breen was adjudged to have deliberately handled Lorcan Forde’s cross into the area by stand-in referee Niall Gallagher, much to the anger of the Reds’ defender.

Wilson took responsibility from 12 yards and drilled his spot-kick confidently past Brush to give the basement strugglers the lead.

Cliftonville huffed and puffed in the late stages but couldn’t fashion a second equaliser as Dungannon Swifts ran out deserved winners at Stangmore Park.