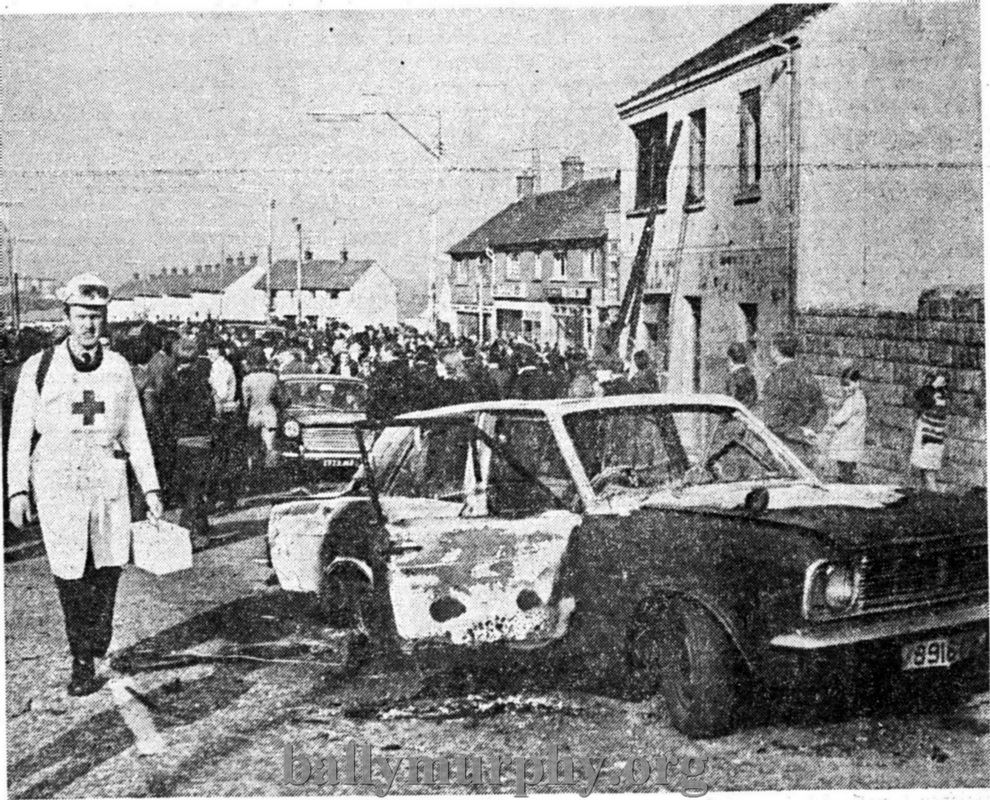 The scene of chaos outside Kelly’s Bar on May 13, 1972 – relatives of those who died would like to hear from anyone who thinks they may have been on the scene

AN appeal has been launched to find the people in this photograph, taken minutes after a UVF car-bomb attack on a Belfast bar over 40 years ago which claimed three lives and injured over 60.

The photograph was taken shortly after the bomb exploded without warning outside the packed Kelly’s Bar on the Whiterock Road on May 13, 1972. In the chaotic aftermath as local people pulled survivors from the rubble, UVF gunmen opened fire from the nearby Springmartin estate, killing 50-year-old Tommy McIlroy, a Kelly’s barman. 20-year-old barman John Moran was killed in the explosion. Apprentice barman Gerard Clarke was critically injured in the blast and after years of pain finally succumbed to his injuries in 1989

In the mass panic after the bomb people from surrounding areas rushed to the site – a scene captured in this photograph.

Attorney General John Larkin has ordered a fresh inquest into the killings and now the families of those killed in the massacre hope this picture will jog some memories of the bloody event and prompt anyone present on the day to come forward and tell what they saw.

Crucially, the families would like to hear not just from anyone who may have witnessed the attack or were caught up in it – they’d also like to hear from the many who rushed to the scene afterwards as they believe they may unwittingly have vital information. They are also calling on anyone who was injured in the massacre, or who had a relative injured, even if they have since died, to contact them. They are particularly keen to hear from anyone who may have been in the vicinity of Springfield Park at the time.

Lisa McNally, Gerard Clarke’s daughter, said someone out there could be in possession of vital evidence without knowing it.

“We are appealing for anyone who might see this picture and remember or who knows someone in the picture to come forward,” she said. “We believe other key witnesses could come forward. People might not think they saw anything of use when actually it could be something vital and they don’t realise it.”

“We are coming up to the 43rd anniversary and hope that with the inquest ordered by John Larkin more people will come forward,” he said.

“Anyone who was there either before or after the bomb please come forward. Even if you were injured but didn’t get hospital treatment please let us know.”

Pádraig Ó Muirigh, the solicitor acting on behalf of the families, said the families had to deal with the added trauma of being lied to in the aftermath of the attack, as the bomb and gun attack was blamed on the IRA.

“As the attack on Kelly’s Bar demonstrates, truth is often the first casualty of war and propaganda was the principle weapon for that dirty war,” he said.

“The official denial of loyalist responsibility for the attack on Kelly’s Bar, coupled with the allegation that the IRA was responsible for the attack, was a classic example of British counter-insurgency strategy in the north of Ireland during the conflict which was also demonstrated five months earlier with the bombing of McGurk’s Bar.

“Over forty years after this incident the families still await an explanation from the British government about the lies and the extent of the involvement of British security services in the attack on Kelly’s Bar and their role in the management of media disinformation in its aftermath.”