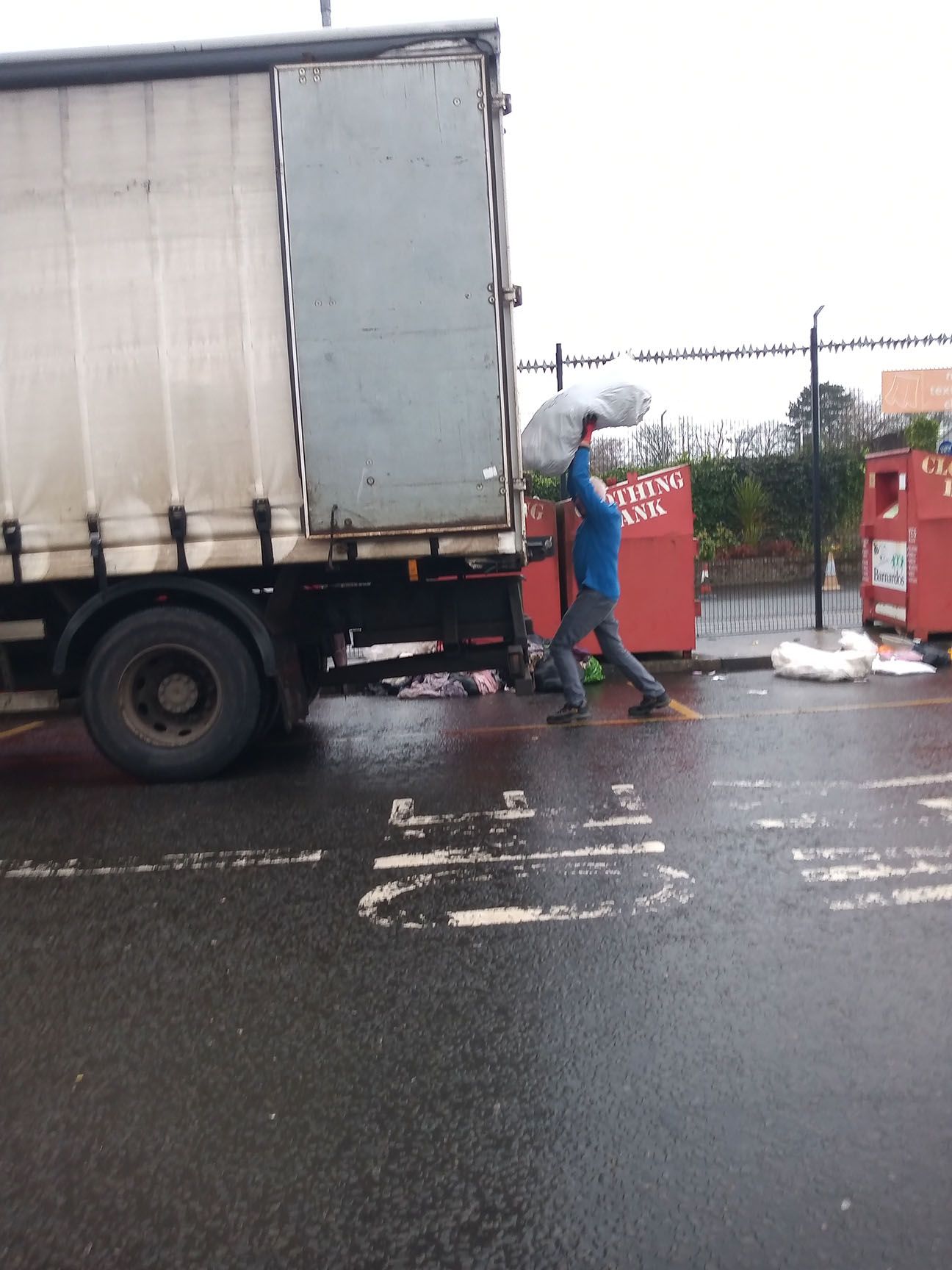 GIVING: Clothes being moved from container to truck

EVERY year,a typical household in Northern Ireland will take dozens of clothing items to a recycling facility near their home.

There is a standard etiquette that if the clothes are torn, worn-out or badly soiled then the donation should be automatically rejected. There is the matter of hygiene here.These clothes are symbolic,they are dead, or nearly there, so they must be disposed off with a bit of respect. This is what we all are hoping for, a good send off to yours truly.

The jeans you have expelled your flatulence from in the last fifteen years, your restored heavy winter coat which has been home to everything: house keys, gloves, cigarettes, lighters, chewing gum, medical disposables, contraceptives, a bag of crisps or peanuts here and there – you just name it!

It reaches a point when this beloved garment must go. And go it will to Africa, Asia or some second-hand clothing restoration factory.

Ireland was once known all over the world for its huge textile industry. Its linen sector employed 40 per cent of the labour force in Northern Ireland. The Majority of these companies employed mostly women. Nearly every town in Ireland had a linen factory. Northern Ireland had 55 linen mills in the mid-1950s and now there are hardly any of that kind.

A similar trend swept through Britain and the rest of Europe. The same happened in Africa where recently there has been an attempt to revive the sector. Most of what is done in Africa now in the brand new textiles industry is really cosmetic.

The poor customer cannot afford new items of clothing from a local factory. Retailers in Africa are not ordering in bulk  for new products.They have to live with what keeps them going. They wait for something else coming from outside, the cheap secondhand personal wear. Those in the queue for these goods come in diverse identities: middle class, working classes and the rich. They all buy secondhand for the common reason: they are cheap.

I went to a city recycling facility in Belfast and exchanged a few pleasantries with two hardworking men. These middle-aged men were bagging thousands of clothes into large clear bags before throwing them into a big lorry ready for transport – destination thousands of miles away, thanks to Irish philanthropy.

Should Irish giving to the outside world modernise itself? Yes and no. Yes, because during this Corona health dilemma, more clothes are going to the recycling containers than usual so bigger and more regular collections should be expected.

The public has become involuntarily enlightened that with this crisis, more poverty is evident elsewhere. Some would argue that the lack of a good garment is not a sign of poverty. In many communities to be clothed is the last taboo, it doesn't matter if that is a tiny population on the planet, their virtue must be respected.

Philanthropy comes with respect because how can you send soiled underwear to another continent? So donations should be regulated: dirty goods with poor hygienic record should not cross any borders.When people sell their decluttering themed merchandise on social media, they will warn the buyer with a polite "From a no-smoking family, no pets". This goes well with a Muslim beneficiary of such items because dogs become an entirely different issue to some subcultures and religions. These matters are hard to control but post-Covid, they should be reviewed.

The secondhand clothes, or mitumba as they are known in the streets, went for a very short break and now are back to the streets in full swing. The governments in Africa should compete with Asia in promoting the textile industry because before the international markets were open in the late 1980s Africa was doing extremely well in new textile. There were factories in most countries in Africa churning out clothes at competitive prices.

If Ireland and the rest of Europe does the same, give good incentives to textiles investors, miracles will happen and thousands of shirt factory jobs will rejuvenate the dying economies.

Then the problem of second-hand clothing dumping in Africa should have a straight solution like the Rwandan government did in 2018. They put a high tariff on used clothes that were coming in. This has boosted their textile industry.

Europe must now start thinking of where to donate or dump its masses of used textile without poisoning the environment.