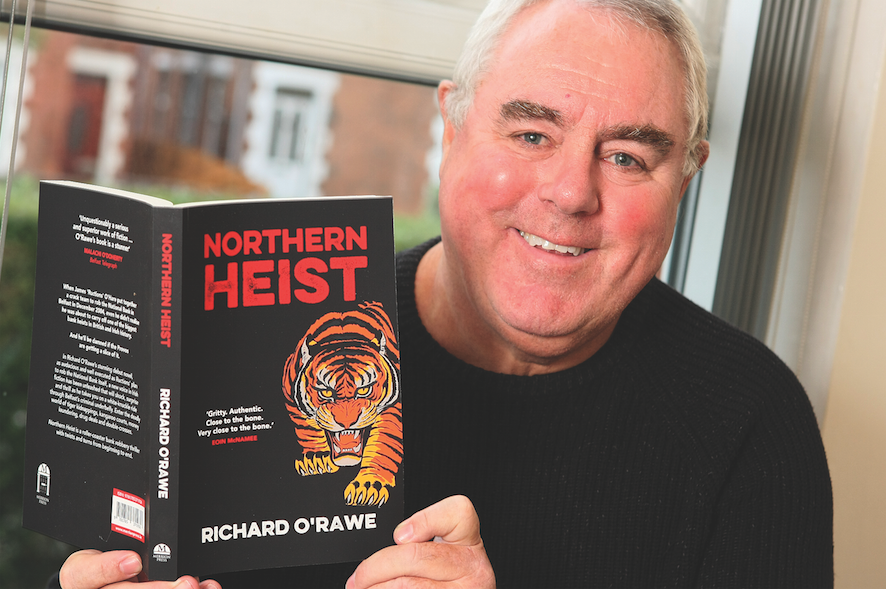 READ ALL ABOUT IT: Writer Richard O’Rawe with his first novel, Northern Heist

FRESH from the success of his biography on close friend Gerry Conlon, West Belfast writer Richard O’Rawe is toasting his first work of fiction.
Northern Heist hit bookshops this month and tells the story of protagonist James ‘Ructions’ O’Hare who puts together a crack team to rob the fictional National Bank in December 2004, all the while taking the reader through the inner workings of Belfast’s criminal underbelly. The newest voice in Irish fiction was himself convicted of robbing a branch of the Northern Bank in Mallusk in 1977, and tells this reporter that the premise of the book was inspired by a whole series of robberies that was occurring throughout the city in 2004.
“This book has been very much on and off, on and off from when I first conceived it,” explained Richard. “I had it in fairly decent shape just prior to Gerry’s (Conlon) death but set it aside to write his biography. It took me three years to write Gerry’s book, which totally preoccupied me.
“When I went back to it, it still wasn’t right. I literally rewrote the second half of the book through many late nights, cups of coffee and glasses of vino,” he laughed. “Once you know where you are going story-wise then it’s half the battle.”
Richard said that the main character of the novel, James ‘Ructions’ O’Hare causes a stir wherever he goes.
“He is Belfast born, a member of the O’Hare crime gang who have a farm up the Hannahstown and whose forte is robbing banks. He is a clever guy, an opportunists who is always on the look out for the next big job – the one that will let him and his family live in the luxury in which they’ve always aspired.”
“During 2004 it wasn’t just the Northern Bank robbery that happened. You had Makro, over the guts of £2 million was robbed, there was a huge robbery down at the docks of cigarettes, a whole series of robberies taking place at that particular time and it struck me that the same people were doing them all.
“When the Northern Bank was done you had the Secretary of State, Chief Constable of the PSNI all saying that the Ra had done it but nobody was ever charged with it.
“There was never any evidence offered so for me, as a writer, that left a vacuum into which Ructions O’Hare stepped,” he said.
“The book is a total work of fiction, people may think they know people when they are reading it but they don’t and they won’t realise that until they get to the end of the story.”
Richard told the Andersonstown News that he has plans to write a sequel.
“Ructions is defiantly going to be back. I am delighted to see the book out there, on the shelves as we had a great night launching it in No Alibis. It’s extremely satisfying to get to this point. There are three film companies looking at making the book into a film so maybe Ructions will be getting screened in West Belfast. I’m delighted at the reception it’s received so far.”
Northern Heist by Richard O’Rawe is out now and available from all book shops priced at £12.99.