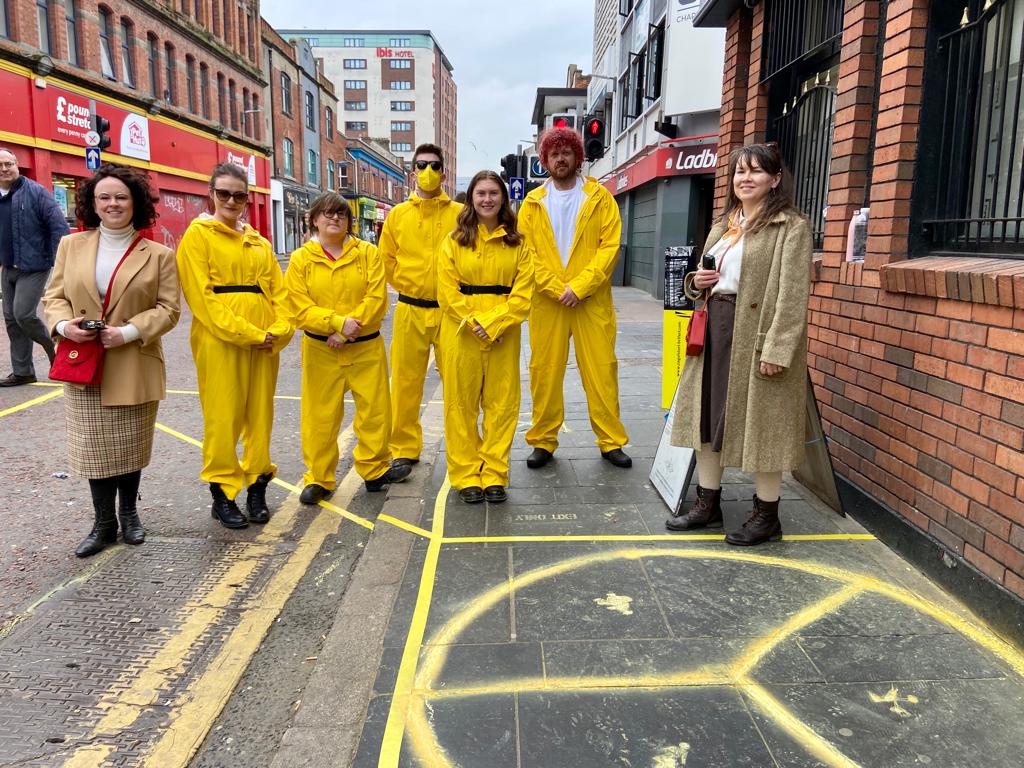 SEARCHED: Actors from the Kabosh theatre group marked the 50th anniversary of the construction of the 'Ring of Steel' in Castle Street

TO mark 50 years since the security cordon known as the ‘Ring of Steel’ was built around Belfast city centre, Kabosh in collaboration with Professor Kate Catterall from the University of Texas have presented a 12-hour theatrical event at each of the former main gates at Donegall Place, Royal Avenue, Castle Street and High Street.

The event aimed to use one of the few culturally mutual experiences of the conflict to facilitate storytelling across communities and between generations.

From the early 1970s to the mid-80s shoppers were searched before entering the city centre and then afterwards as they entered shops. It was a security measure to thwart IRA bombers.

Fifty years ago a 'ring of steel' was erected around Belfast city centre, and it stayed there for almost 20 years. Anyone coming into the city was stopped and searched at a series of security barricades. Today the memories of that time were recreated, as Robbie Meredith reports. pic.twitter.com/hE1jepaCIR

Professor Kate Catterall, who was born and raised in Belfast and has direct personal experience of the ‘Ring of Steel’, said: “For over 20 years during the conflict, the series of gates, fences, turnstiles, search stations and blocked roads known as the ‘Ring of Steel’ became an increasingly prominent feature of the urban environment in Belfast.

"Staffed by both civilian searchers and armed security personnel, the cordon had a significant impact on the daily lives of all who passed in and out of the city centre every day, to work, shop or socialise.

"Ongoing development since the 1998 peace agreement has erased much of the evidence of the ‘Ring of Steel’, and only traces remain today to show that it ever existed. This work aims to create a record of what was a singular and largely unrecorded episode in Belfast's recent history.”

Paula McFetridge, Artistic Director of Kabosh added: “Memories of the ‘Ring of Steel’ and regular civilian searches are shared between all Belfast communities, cutting across sectarian, class and gender lines. Images of the structures were flashed across the world, becoming part of our global identity.

"Drawing the Ring of Steel aims to highlight how far Belfast's city centre has developed from those times, into an inclusive shared space. It will ensure that the stories of the older generation are heard and preserved and to support younger generations and those with no experience of the ‘Ring of Steel’ in appreciating both the journey that has been made and how far we still have to travel.”

At each of the four ‘Drawing the Ring of Steel’ sites, performers redrew the lines of the security checkpoints and barriers and enacted choreographed search motions.

Other performers in 1970s dress interacted with the public asking them questions about their memories or knowledge of the ‘Ring of Steel’ and collecting their stories.