Rude Boy Reds put on a night to remember 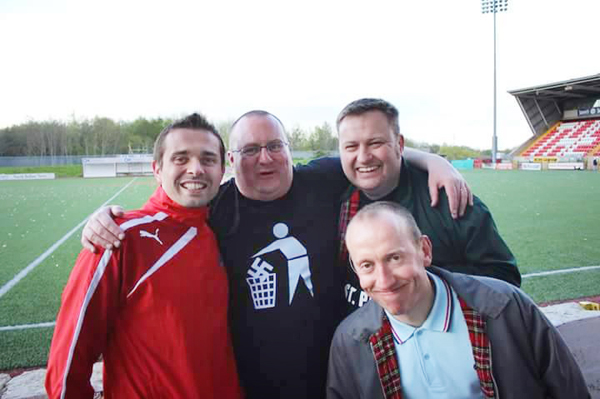 FROM the West Indies to North Belfast – ska is returning to this part of the city later this month.

Organised by Gareth McKenna, a night of ska, soul, reggae and rocksteady music will come to Cliftonville Social Club on October 22 in aid of local charity PIPS (Public Initiative for Prevention of Suicide and Self-Harm).

A fantastic night is in store on ‘Skalitude IV’ with great prizes, brilliant music, tremendous craic and possibly gargantuan hang-overs.

“It’s the third one we have done this year, a type of ska night in Cliftonville Social Club,” explained Gareth.

“The social club had asked us to put one on during the summer last year to keep the crowds up when the football season wasn’t on.

“We had one around this time last year during the Syrian refugee crisis and we raised around £2,500. We held another one in April for Outreach, who work with the homeless.

“This one is in aid of PIPS. It will be a £5 donation on the door with reggae, soul and ska music. We have a number of raffle prizes on the night, including the training top of Cuban athlete Dayron Robles, who won the 110 metres hurdles at the 2008 Olympics in Beijing.

“The purpose of the night is for as many people to come along, have a bit of craic, enjoy themselves and raise money for a cause that is close to so many people in North Belfast,” he added.

Based on the Antrim Road, PIPS provides support to individuals who are considering, or have at some point considered, ending their own lives. PIPS can also provide support for families who have been touched by suicide. The PIPS name is synonymous across North Belfast and beyond with the provision of support during crisis times and with suicide and self-harm prevention guidance during these crises.

They also provide a range of training courses in suicide and self-harm prevention with a focus on intervention at the earliest possible point.

PIPS endeavours to make understanding signs of suicide, the promotion of self-help and the need for immediate, appropriate services at the point of crisis everyone’s business.

“Suicide is something that has touched most people in North Belfast. The PIPS charity provide an invaluable service and it’s always good to support a charity so local,” said Gareth.

“Our nights have got bigger and better which attract more and more people which can only be good for raising as much money possible.

“We're aiming to raise at least £1,500 for PIPs who we all know do great work in North Belfast and beyond. I know everyone will step up to the plate once again!”

Skalitude IV takes place at Cliftonville Social Club on Saturday, October 22 from 8pm to 1am.

You can also donate via the Just Giving page at https://www.justgiving.com/fundraising/Skalitude4