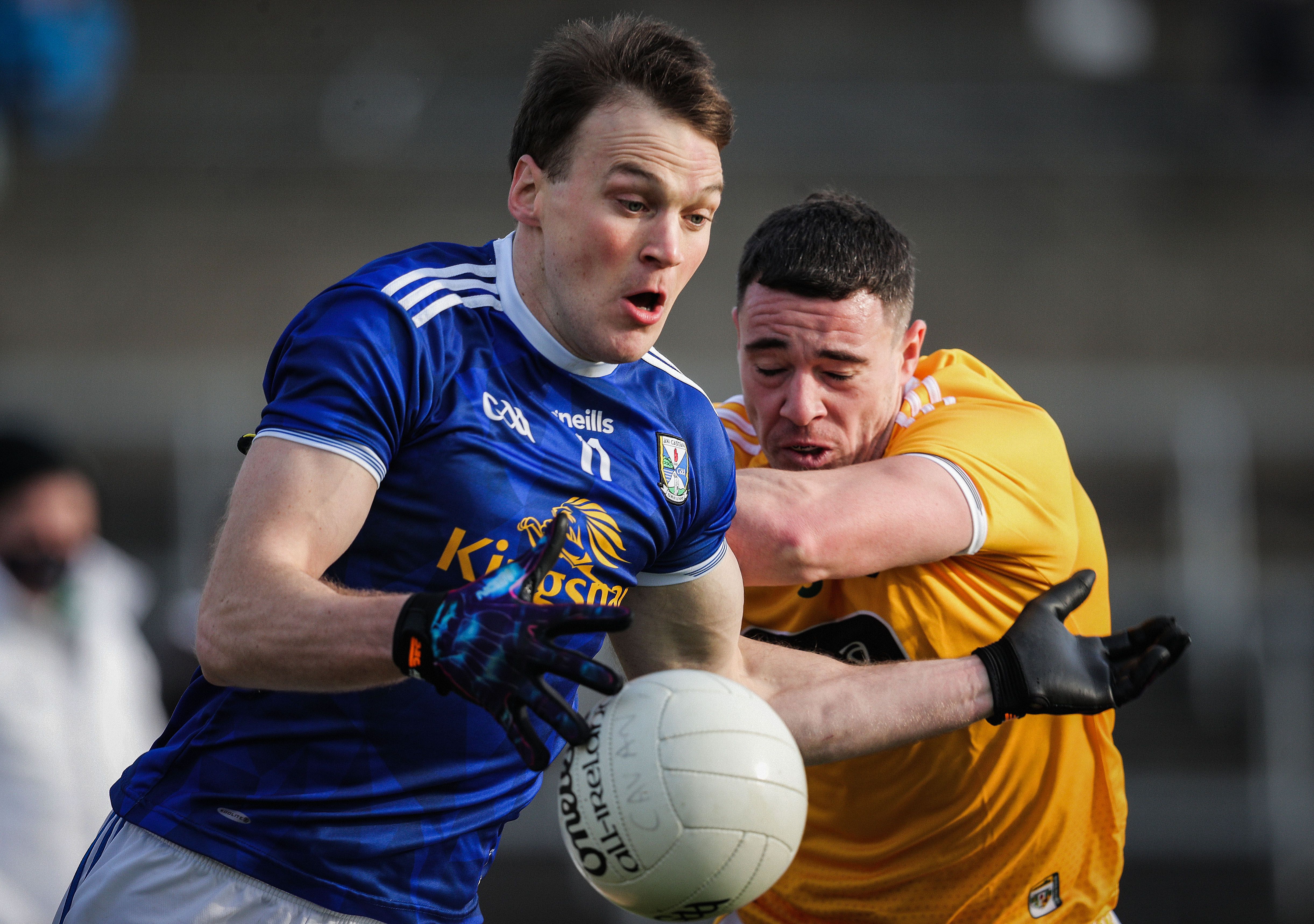 ANTRIM bowed out of the 2020 Ulster Senior Football Championship after a battling performance in defeat to Cavan at Kingspan Breffni Park.

In the end, four points separated the sides, but the Saffrons will look back on this game as one that was there for the taking.

Antrim defied all pre-match predictions and led 0-6 to 0-5 at the break while Cavan had defender Killian Brady sin-binned for the first 10 minutes of the second half.

However, Antrim failed to take advantage of their numerical advantage during that period with Paddy Gallagher squandering the game’s only clear-cut goal-scoring opportunity.

The move started with a surging run out of defence from the Glenavy corner-back, who off-loaded to Michael McCann before continuing his support run.

McCann passed back to Gallagher as Antrim cut through on goal, but Gallagher’s shot was well-saved by Ray Galligan.

By the time Brady returned, Cavan had moved a point ahead and Antrim were never able to get back on level terms.

A couple of classy points from Gearóid McKiernan, who was well-marked by Declan Lynch for the majority of the contest, gave Cavan a bit of breathing space and some wasteful shooting from the Saffrons hindered their chances of causing an upset.

Further black cards issued to Gerard Smith and Oisin Kiernan failed to derail the Breffnimen, who play the winners of Sunday’s quarter-final clash between Fermanagh and Down in Brewster Park.

Speaking after the game Antrim manager Lenny Harbinson felt his side let Cavan off the hook in the crucial third quarter.

“We put ourselves into a winning position at half-time. We knew it was going to be a massive task down here,” said Harbinson.

“Cavan have played in Division One and Division Two and they have that bit more quality.

“We had a spell just after half-time and we missed a goal opportunity. Paddy (Gallagher) looked to have been fouled just as he was kicking.

“In that period, we probably missed 1-4 and they went up on the counter-attack and got a couple of points. That’s their quality and their experience.

“Antrim have some great lads and you saw their determination and effort, but we are just lacking a bit of quality in the final third.”

Harbinson’s three-year tenure official ended with the four-point defeat in Cavan. When asked if he would like to remain on in the role, the St Gall’s clubman replied: “Right here and now, in this moment I don’t know. That’s the honest answer.

"Management, especially in football, there’s a bit of madness associated with it at county level. Do I want to get in on that carousel again? I’m not sure.”

There will, of course, be speculation on Harbinson’s future in the coming weeks and that of veteran campaigners Paddy Cunningham and Michael McCann. Yet, on the basis Saturday’s game, the trio still have much to offer Antrim football.

The Antrim manager will take great heart from the vast improvement shown by his side from the shambolic performance of Wicklow last month.

Tactically, Harbinson also got a lot of his match-ups spot on with Lynch doing as good a job on the in-form McKiernan as could be expected while Kevin O’Boyle kept Martin Reilly out of the game.

Cunningham was one of Antrim’s best players in the first half while McCann was a contender for man-of-the-match.

Antrim were good value for their narrow half-time lead, but they benefitted from some wayward shooting from the hosts, who kicked six wides and dropped three shots into the arms of Oisin Kerr in the first half.

Cunningham levelled the game from a free while a stunning point from McCann moved the Saffrons into the lead for the first time.

Cavan centre-back Ciaran replied in kind with a fine score at the other end, but Conor Murray restored Antrim’s lead with a mark.

His Lámh Dhearg clubmates Cunningham and Kevin Quinn pointed either side of a score from Cormac Timoney as Antrim lead 0-6 to 0-4 at the half-hour mark.

Brady knocked over his second point just before the break before Killian Brady picked up his black card on the cusp of half-time for hauling down Paddy McBride.

Antrim couldn’t make the extra man count after the break though as Killian Clarke levelled the game on the restart, yet Gallagher’s goal chance would have given the Saffrons renewed impetus.

However, his shot lacked the conviction to beat Galligan, although there did appear to be a slight nudge on the Antrim defender as he got his shot away, but referee Paul Faloon didn’t award a penalty.

Cunningham, Colum Duffin, Mark Sweeney and Paddy McCormick all missed chances to add to Antrim’s tally while Cavan were beginning to find their range and midfielder Thomas Galligan, who was introduced at half-time, was having another big game for Mickey Graham’s men.

With 55 minutes gone, the home side had moved three clear with points from McKiernan (free), Thomas Donohoe (mark) and Oisin Kiernan.

Gerard Smith’s black card for dragging down Conor Murray reduced Cavan to 14 men once again and Tomás McCann converted the free to leave two between the sides.

The next passage of play would be crucial though as the influential McKiernan won the kick-out, played a one-two before firing over a brilliant point with 12 minutes remaining.

Antrim continued to battle on in the closing stages without engineering a goal chance to really put Cavan on the back foot. Furthermore, their decision-making in front of the posts was poor.

Cavan picked up their third black card of the game when Oisin Kiernan clattered into Kevin O’Boyle off-the-ball.

Conor Murray briefly cut the gap back to two, but late points from Donohoe and McKiernan sealed a hard-earned four-point win for Cavan.