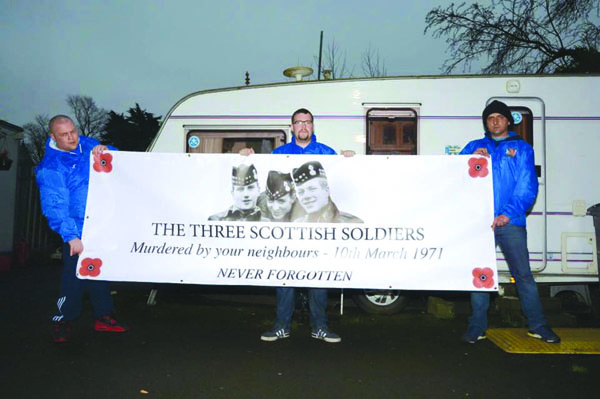 A Scottish loyalist group who were accused of stirring up tensions when they occupied Camp Twaddell for a week in April are to return to North Belfast on a more regular basis.
A spokesperson for the Regimental Blues said that his group’s sole purpose was to offer a break to local protesters who had grown “tired, disillusioned and frustrated” after three years of maintaining the camp.
The Glasgow-based group, which boasts a membership of over 300, confirmed that they have agreed to return to the camp on May 27 for a week and have offered the camp’s volunteers a commitment to return every eight weeks on a rota basis.

Kris McGurk claimed that group’s first occupation of the camp in April, which coincided with a planned protest march to mark the 1,000th day since Orange lodges were blocked from parading past nationalist homes during their return parade along the Crumlin Road on July 12 2013, had been a “success”.
“It was a big success from our end, absolutely,” he said. “A lot more pressure was applied to the politicians, especially on the 1,000th day.
“The ball was put in their court, this situation isn’t going away and it’s up to them to resolve it.
“We are hoping if we come up with a game plan, where we can man the camp every once in a while, along with the locals in Belfast and other community groups, we will give the unionist MLAs, who are now back at work, a boot up the backside.”

Previously, Camp Twaddell was manned by volunteers 24/7 on a rota basis but as support has dwindled, the camp is regularly locked and left vacant.
Last year it was revealed that policing the three year protest camp in North Belfast was costing over £330,000 a month.

Asked about his group’s political motivation for trying to re-generate support within and around the camp, Mr McGurk said that their only agenda was to show support to fellow loyalists.
“To offer a break is the only reason we are doing it,” he added. “It is purely to show support in the form of manpower. There is no real other agenda.”
“After three years it’s only natural that things would tend to calm down.
“People are staring to tire, people are starting to be disillusioned and frustrated. I think this is why it’s an ideal time that a group like ours are now able to make a commitment to manning it.”
Mr McGurk again reiterated that the group would not be engaging with local residents or businesses from the nationalist community while they manned the camp, saying that he believed it was the job of “the politicians and elected reps”.