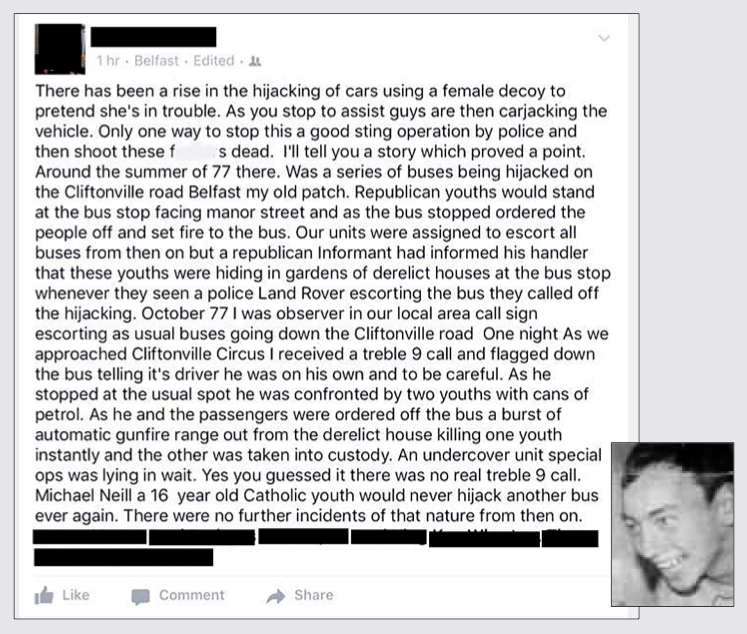 A screenshot of the now-deleted Facebook page on which the British army ambush claim is made and, inset, Michael Neill

A support group for people injured or bereaved during the Troubles has called for a fresh inquest to be held into the death of a teenager shot dead by the British army in North Belfast almost 40 years ago amid claims on social media that the killing was a carefully organised ambush.

Relatives for Justice have called for the Police Ombudsman to investigate the killing of 16-year-old Michael Neill on the Cliftonville Road in October 1977 and the alleged involvement of an undercover unit. The call comes after a social media account purporting to be that of a former RUC officer claimed he had liaised with a special ops army unit to orchestrate the killing.

Michael Neill was shot three times while trying to escape a British army patrol. At the time police claimed he was one of a number of youths who had stopped a bus on the Cliftonville Road.

His family have always denied that version of events and said that Michael had been returning home after visiting friends in the Bone area. The family originally engaged with the now defunct Historical Enquiries Team (HET) calling for a thorough investigation, with no success. They most recently submitted their case to the Haass Panel in 2013.

However, there have now been calls for the Attorney General to investigate the source and the accuracy of the shock Facebook post and to consider the possibility of a new inquest.

In the post, the man says that he was part of a police patrol in North Belfast that had been assigned to escort buses down the Cliftonville Road because of a high level of bus hijackings.

The man said he pretended to take an emergency call and left a bus unattended. He went on: “A burst of automatic automatic gun fire range (sic) out from a derelict house killing one youth instantly and the other was taken into custody. An undercover unit special ops was lying in wait. Yes you guessed it there was no real treble 9 call. Michael Neill a 16 year old catholic youth would never hijack another bus ever again. There were no further incidents of that nature from then on.”

The Facebook page has since been deleted but the PSNI confirmed that they are aware of the information posted and added that the case “will be subject to a full review in due course by the PSNI’s Legacy Investigation Branch”.

Paul Butler of Relatives for Justice, who has been working closely with the Neill family, said: “Claims that an undercover unit of the British army had lay in wait in a derelict house on the Cliftonville Road need to be investigated. A statement issued by the RUC at the time said a British army patrol had came across the hijacking of a bus on the Cliftonville Road and that they opened fire killing one youth.

“The person on Facebook who said he was a former RUC officer and was aware of an undercover unit needs to be questioned by the Ombudsman. RFJ had taken a statement from a civilian witness in 2012 about the death of Michael Neill. They said they saw soldiers enter a derelict building on the Cliftonville Road on the day Michael Neill was shot by the British army. We will pass this statement on to the Ombudsman.