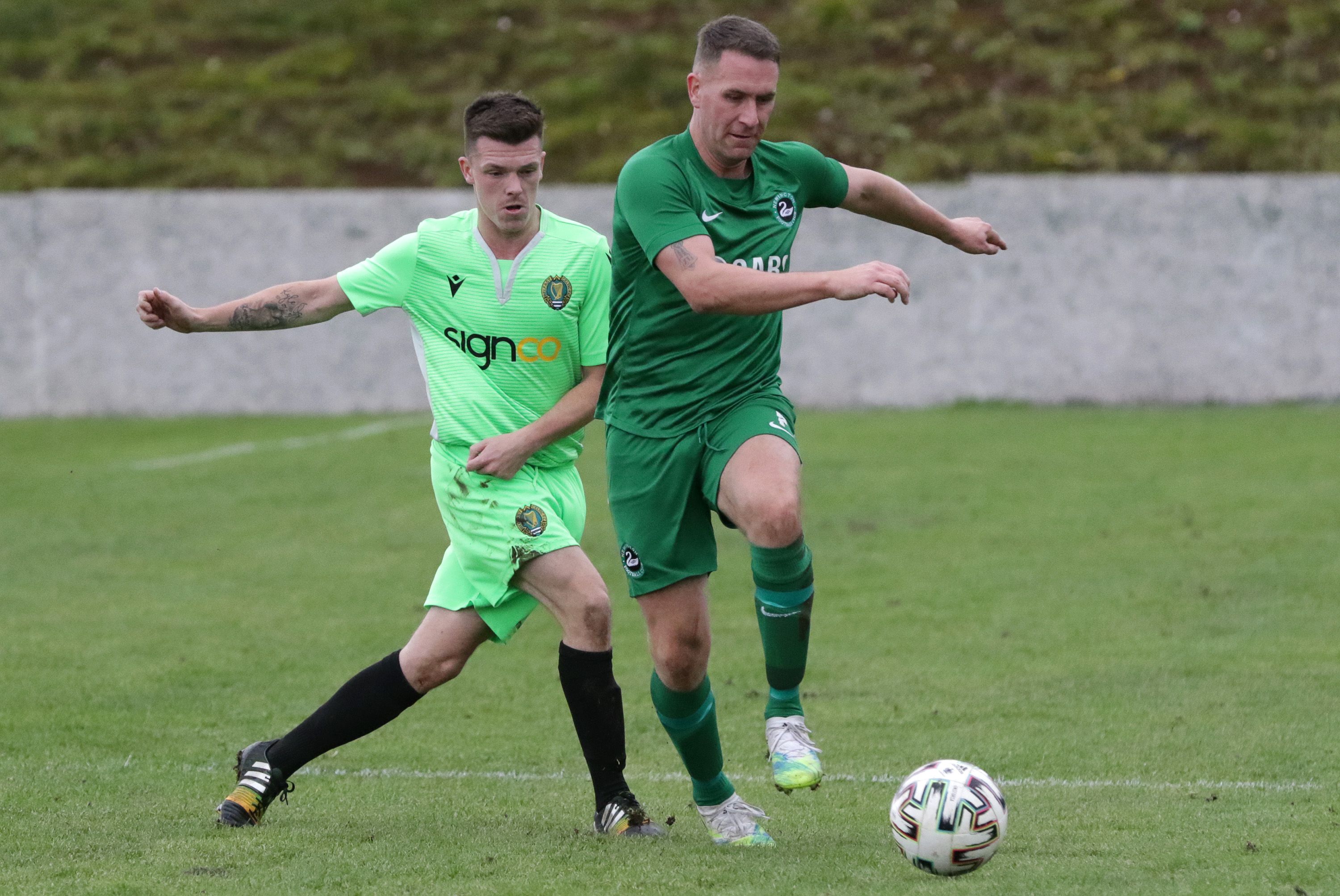 NEWINGTON progressed to the semi-final of the Steel and Sons Cup with a stunning 4-1 win over Belfast Celtic at Glen Road Height on Saturday.

The game was finely poised at 1-1 at the break with Patrick Pierce giving the visitors the lead on 10 minutes before Kevin Lynch equalised for the hosts.

Yet, Newington were ruthless after the break and goals from Patrick Downey, Aodhán Gillen and Gary Warwick sealed a comprehensive victory for the North Belfast side.

The scoreline might have been given more one-sided had it not been for some brilliant goalkeeping from Paul McLaughlin. His save to tip a Conal Burns shot on to the post shortly after the half-hour mark was outstanding and the Belfast Celtic ’keeper made a host of other first-class saves.

Speaking after the game, Newington manager Paul Hamilton hailed the performance of his side and also the home goalkeeper.

“I was delighted with their attitude and their desire to win and get into the next round,” said Hamilton.

“That was our aim today. In the first, maybe we shaded it, but in the second half we just upped it a level and we were more aggressive and braver on the ball.

“Overall, our performance was top-drawer. We pressed in numbers and we created chances. I thought their ’keeper (McLaughlin) was excellent today and he kept the score down.

“I thought we were a bit guilty too in front of the goal in that respect. Maybe we could have been a bit more ruthless, but if you give me a 4-1 win in any quarter-final and I’ll snap the hand of you.”

The opening 45 minutes lived up to the pre-match billing of two evenly matched teams, although both struggled at different times to cope with a strong swirling breeze at the West Belfast venue.

Newington had looked threatening from set pieces and they got their opener from a corner on 10 minutes.

Gillen’s initial corner found Pierce at the near post, but his effort was deflected over the crossbar.

At the next attempt, Gillen delivered a perfect cross and Pierce was afforded too much room at the back post and headed the ball beyond the reach of McLaughlin.

After enjoying the better of the early exchanges, Newington were then put on the backfoot as Belfast Celtic worked their way back into the game.

The pressure soon told as the hosts found the equaliser when Marc Maybin’s attempted clearance only found Padraig McParland. He played the ball across the face of goal to Kevin Lynch, who backheeled the ball into the corner of the net for a superb goal to level the contest on 24 minutes.

Maybin was called into action minutes later when the wind almost took Emmett Templeton’s shot beyond his grasp.

At the other end of the pitch, Newington thought they’d found their second when a rasping shot from Burns looked destined for the top right-hand corner of the net. However, McLaughlin flung himself into the air and managed to get his fingertips to the ball to direct it on to the post.

The rebound fell kindly for Downey, who again looked odds-on to find the net. Yet, rather than slipping the ball in at the near post, Downey drilled the ball back across the goal with McLaughlin recovering in time to make the second stop.

A few minutes before the break, a minor scuffle broke out along the sideline and referee Richard White brandished yellow cards to a member of Newington’s backroom team and Belfast Celtic boss Stephen McAlorum.

The skirmish added to the tension and the second half looked set to be just entertaining as the first.

In reality, Newington put the game beyond their rivals midway through the second half with a devastating display.

It took Hamilton’s men just five minutes of the half to retake the lead with Gillen supplying the pass and Downey providing the finish.

Four minutes later and the North Belfast men had a two-goal cushion. A headed clearance out of defence from Francis McGuinness was intercepted by Gillen who slotted past McLaughlin to make it 3-1.

With 20 minutes gone in the second half, Newington killed the game off with their fourth goal.

Richard Gowdy, who delivered another fantastic performance at midfield, headed the ball in from a corner and Gary Warwick bundled the ball home from close range to end the game as a contest.

Despite their three-goal advantage, Newington kept their foot on the throttle and the home side failed to muster much in the way of clear-cut chances at the other end.

Indeed, it was up to McLaughlin to keep the score respectable in the closing stages.
He made a fine save when Warwick was one-on-one and he was smartly off his line to smoother Gillen’s effort moments later.

In the final moments of the game, he also denied substitute Daire Rooney, but Newington’s victory was already assured.

Having reached the final back in 2019, the ’Ton are just 90 minutes away from another appearance in the Christmas Day Steel and Sons Cup final.