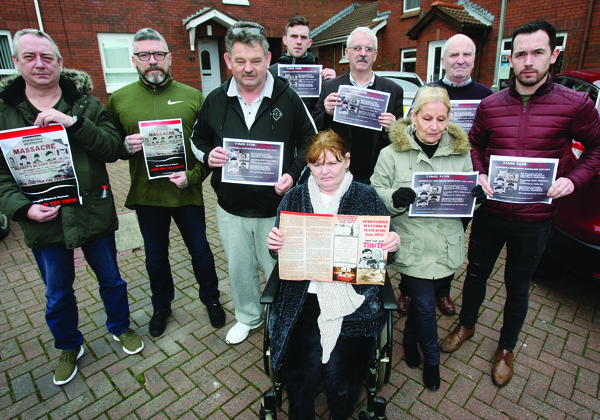 PROMINENT QC Michael Mansfield will be guest speaker at the Cultúrlann on Tuesday February 26 as the Springhill Westrock Massacre Families officially relaunch their campaign for justice 47 years after their loved ones were killed.
Five lives were lost in the Springhill estate on July 9, 1972.
New inquests into the death of the civilians were directed by Attorney General John Larkin back in 2014. Those killed were: Margaret Gargan (13); John Dougal (16); David McCafferty (14); father-of-six Patrick Butler (38); and Fr Noel Fitzpatrick (42), who was based at Corpus Christi church.
Due to the ongoing political stalemate and the impasse surrounding legacy killings the families are no further on in their legal cases.
Margaret Gargan’s brother Harry told Daily Belfast that the grief his family experienced following Margaret’s death was “horrendous”.
“I was just 12, one year younger than Margaret, when a British soldier’s bullet took her so cruelly from her loving family,” he said. “After Margaret’s death our mother Nelly failed to cope with her loss, she was unable to sleep without sleeping tablets and nerve tablets and became a chain smoker. Sometimes our late father would have to physically restrain her to stop her from going out to fight with the British army as they passed our home.
“Over the passing years, with the love of our family and the wonderful neighbours of Westrock and Whiterock, her grief eased, but it never left her. Our mother joined Margaret at the age of 57 with a hole in her heart that could not be mended. Our father who was always fighting for truth and justice for Margaret joined them at 75. We as a family told him we would keep his fight going.
“We are now into the 47th year since we lost our beautiful sister and with the relaunching of our campaign there is light shining at the end of a long, dark tunnel. There have been too many false starts.”
Now living in Canada, Betty Kennedy, the sister of schoolboy David McCafferty, said that she hopes along with other family members that they will get the truth and justice that has been denied them for so long.
“This is very emotional for us all and still very difficult to talk about even after 47 years,” she said. “We have never spoken about what happened together as a family after David was killed except very rarely and minimally one-to-one. I was seven when it happened and my memories are limited of David’s life before that. I remember the worry my Ma and Da had and the look of despair on their faces at the news coming to our house. I remember staring at our David in the coffin and hoping he’d come back. I thought he started to breathe and I remember shouting ‘David’s breathing.’ Our Anne came and took me into the kitchen, he wasn’t breathing, his chest had caved in as it had to be padded due to his injuries and the number of times they shot him in the chest as he tried to drag Fr Fitzpatrick to safety.”
Michael Donnelly, who has been working closely with the families, is encouraging people to attend the event on Tuesday night.
“This is very much an event, an appeal from the Families, asking the community for their support as the years continue to go by and they continue to wait for truth and justice, the truth and justice that they deserve,” he said. “We will have Pádraig Ó Muirigh, who is the legal representative for four of the family members, also attending on Tuesday and we want to keep building on the momentum of this campaign.”
The Springhill Westrock Massacre families will re-launch their campaign on Tuesday February 26 at 7pm at the Cultúrlann. All are welcome to attend.