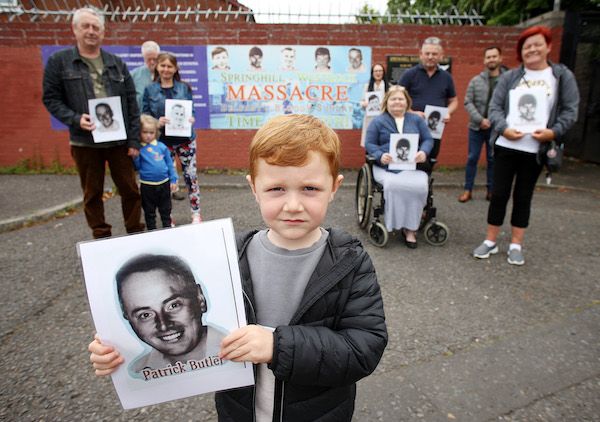 NOT FORGOTTEN: Patrick Llewellyn holds a photo of his grandfather Patrick Butler

THE families of those killed in the Springhill-Westrock Massacre of 1972 have asked the public for their support as they seek a new inquest into the killings.

On July 9 1972, five innocent people – including three teenagers – were shot dead by the British Army between the Springhill and Westrock estates in West Belfast.

Despite evidence of their innocence, including eyewitness accounts of the events, an inquest held at the time returned an open verdict.

New inquests into the killings were directed by the then Attorney General John Larkin back in 2014. However, the case has been beset by delays ever since.

Last month, a coroner ruled that the victims of the 1971 Ballymurphy Massacre were innocent and were unjustifiably killed by the British Army.

Harry Gargan, whose sister Margaret was amongst those killed in Springhill, expressed his delight at the Ballymurphy Inquest verdict.

He said the verdict had brought a renewed focus on the Springhill-Westrock families' fight for an inquest, which is sadly outstanding.

As the families approach the 49th anniversary of their loved ones' killings, Harry said they have been told there is "no guarantee" an inquest will be held in the coming year.

"Any time someone belongs to you dies you know you're not invincible. You watch your mother and father live through all of this without achieving justice.

"That's why we're coming together, we all want an inquest held.

"We've seen through the Ballymurphy inquest what can be achieved."

He added: "We want to highlight it so that it doesn't go out of people's minds. We want to make sure we get our inquest in the next year.

Davy McCafferty, whose son David was amongst those killed, described the original inquest as a "sham".

"They were all innocent victims - my kid was only 15," he stated. "The guys who were in charge of the army at that time all got promoted."

Harry continued: "Davy is the last parent, he's 92 years of age, so we would hope we would get the inquest before long because none of us are getting any younger.

"I remember my own mother and father coming back from the original inquest and it was like my sister getting killed all over again, because they had to sit and listen to soldier statements saying that she was a 13-year-old girl who was with a 20-year-old gunman. There was no challenge. They were allowed to say what they wanted, and nobody said 'hold on, this is a 13-year-old girl you killed.'"

Sinn Féin Councillor Michael Donnelly, who is supporting the families in their campaign, said: "We're all delighted that the Ballymurphy families got their day in court and got the truth and justice that this community knew all along, and it was great to hear their names cleared.

"This is about lifting the campaign now with the Springhill-Westrock Massacre families. It has been referred to as 'the forgotten massacre', but it's not forgotten in this community.

"We need to continue to raise awareness until these families have their day in court so their loved ones can have their names cleared.

"It was an 11 month brutal campaign across the North. On the 9th of August 1971 we had the Ballymurphy Massacre, you fast forward to January 1972 you have Bloody Sunday, and then 11 months after Ballymurphy there were five innocent people shot dead in Springhill-Westrock.