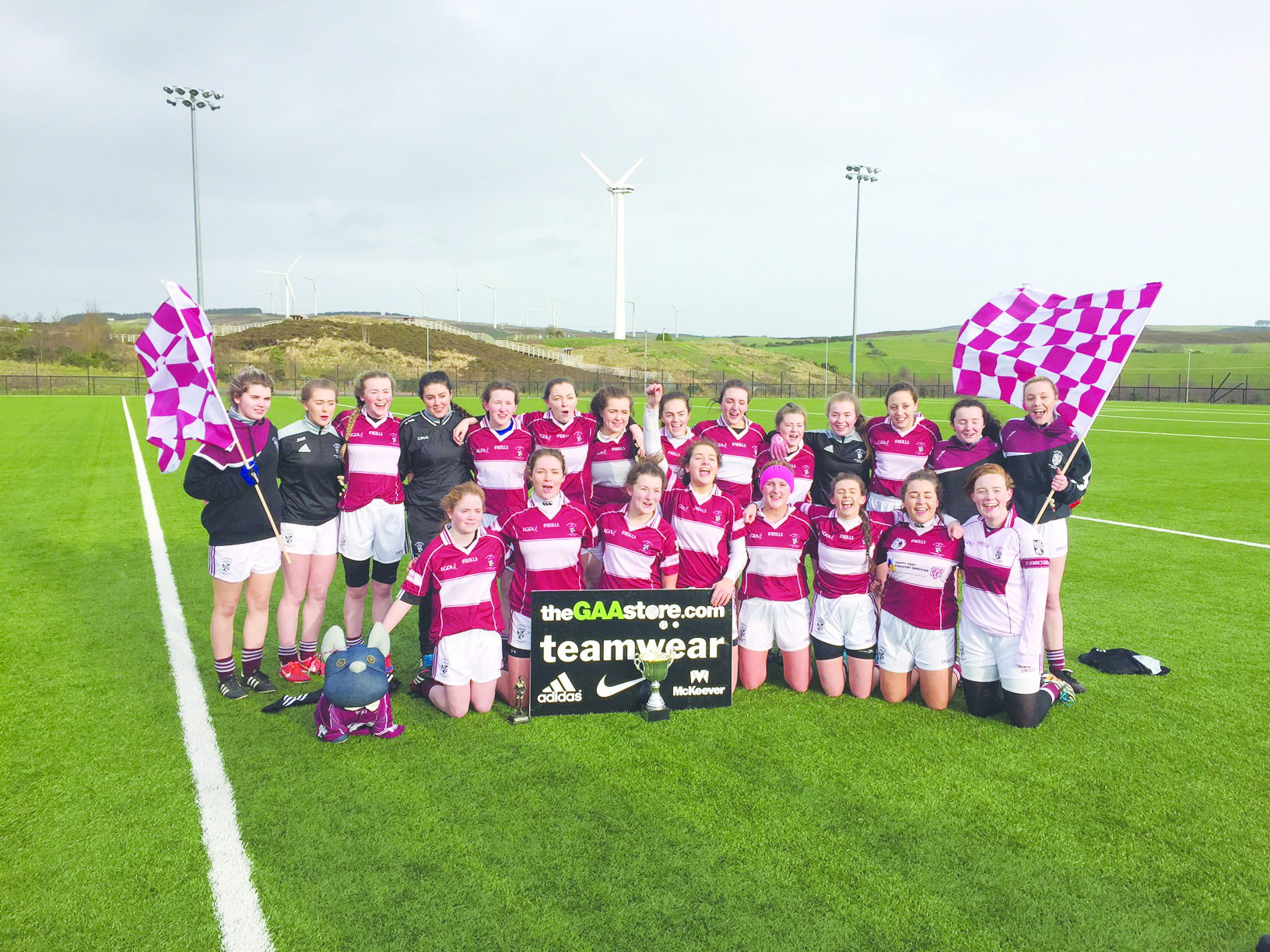 St Dominic’s Ladies Footballers celebrate after becoming the first team from the West Belfast school to win an Ulster title following their 11-point win over St Columba’s, Glenties at Garvaghy.

ST DOMINIC’S battled the elements to become Ulster champions for the first time in the school’s history last Friday at Garvaghy. The girls have been working hard for the last five months and the squad of 22 have been working towards one goal, a place in the Ulster final. This reward hasn't been gifted to them. It comes after more than 50 hours of team training, including during school holidays as well as fitness sessions before school. The team were focused on achieving this goal. The last Friday in January was the date set for this Ulster final and the weather was always going to play a part. A great decision by captain Orla McCrory to play with the wind in the first half stood well for the girls from the Falls Road and from the throw-in, the St Dominic's girls never looked back. The game started with a well worked goal for St Columba’s finished off by the lively Deirbhile Ward. Just a minute after conceding to Ward, St Dominic’s got a goal of their own as Michelle Magee soared through the St Columba’s defence and smashed to the net past goalkeeper Rosa Kelly. St Columba’s worked the ball well into dangerous positions in the first half, but excellent defending by Katie Rafferty and Eabha Connolly kept them to two points from play. They created a couple of goal chances, but with three superb stops from goalkeeper Danielle Forde and a commanding full-back in Nicole McKeown, St Dominic’s managed to keep the opposition to 1-2 in the first half. The writing was on the wall for the Glenties school by the quarter-hour mark. With the Magees, Michelle and Emma, weaving their way through the middle of the park for St Dominic’s, the Belfast side gained a foothold in the game. Superb play from the St Dominic's forwards led by Michelle Magee and Dearbhail McShane who were the architects of the St Columba’s downfall in the fatal opening period, saw these girls score 2-11 between them. St Dominic’s managed a third goal when Molly White’s shot from the left-hand side squirmed under the goal keeper and into the net for a 3-13 to 1-2 advantage for the West Belfast outfit. The second half was going to be a battle and wise words from Lucy Wallace and Emma Magee at half time made sure the girls knew they were going back out into a battle. St Columba’s made a go of it in the second half, but the mountain was too steep for them to climb. The work rate from the St Dominic’s forwards including Maria Hanna, Shona Garland and Cliodhna Duffy made it extremely difficult for the girls from the Glenties to get the ball up the pitch. On 43 minutes, after St Columba’s had reeled off six points in a row, Molly White had created some room for herself and in true soccer style lobbed the keeper from 15 yards out. With the wind getting stronger in the second half, St Dominic’s knew they would be up against it and their game plan of keeping possession at all costs was demonstrated superbly by captain and vice-captain, Orla McCrory and Emma Magee who marshalled the midfield. The defence had their work cut out with wave after wave of Glenties attacks aided by the gale force wind, but with great work at holding them up from Lucy Wallace and Nicole McKeown, the defence was able to turn over the ball and work it out from the two tireless half backs, Caoimhe Stewart and Eva Cafolla. The girls stuck to their game plan set out by Miss McCann and Mr McGlade and in the end came out deserved winners after a tough battle. The girls go down in the history books as the first St Dominic’s team to ever win an Ulster final. The players were a credit to themselves and to the school.