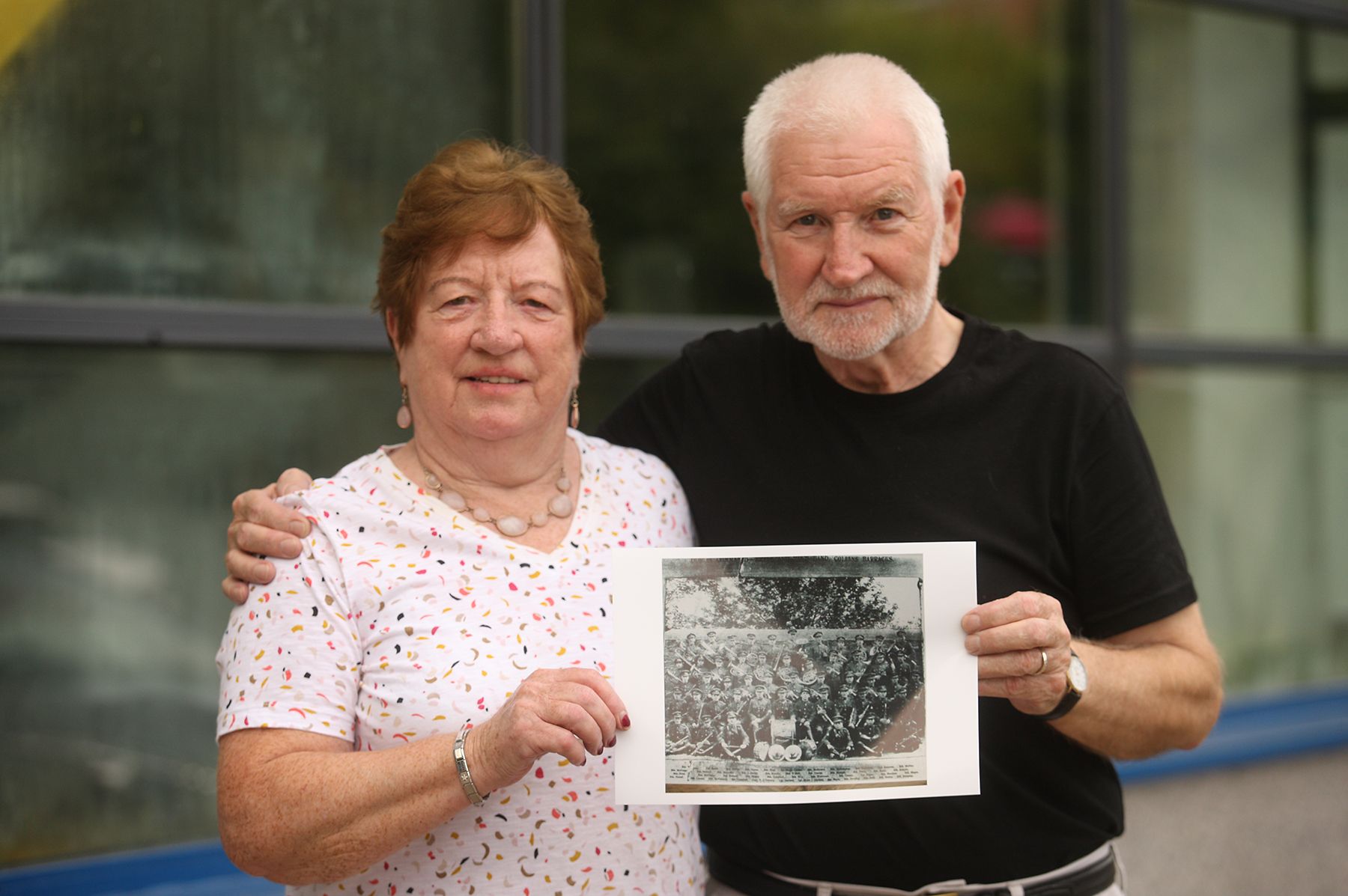 FAMILY HISTORY:  Pádraig Mac Fhearraigh and Áine Matthews with the photo of the Free State Army band with the St Peter’s players among its ranks; below, William Boyle, circled, with the army band

THE disbandment of one of Ireland’s oldest and most iconic marching bands has helped unearth a fascinating personal history of its one-time President.

Our report featured a fascinating photo, taken in 1923, of the then newly formed Free State Army Band, which had attested members of St Peter’s into its ranks following partition.

Amongst those pictured is a Sergeant William ‘Billy’ Boyle, then of 23 Balkan Street, whose family reached out to the Andersonstown News this week.

Originally from the Market area of Belfast, William would later settle in St Peter’s Parish after marrying Mary ‘Minnie’ McAuley.

Before his time in the Free State army, William had, like many young men of his generation, gone off to fight in the First World War.

His grandchildren Pádraig Mac Fhearraigh and Áine Matthews say he never spoke of his time in the military, but rather focused much of his attention on St Peter’s Brass & Reed.

“He was a very private man,” Áine said.

“He never talked a lot, but he spent a big lot of his time in the band rooms on Dover Street.”

Pádraig added: “He played a big part in teaching other band players.

“There was the Osbornes, who played in all the dance bands during the 60s and 70s in Belfast, but they got their initial tuition from granda Boyle.

“They all learned to play their instruments in St Peter’s.

“He wanted me to take up the Clarinet but I was never musically inclined – for him, it was his lifeblood.”

He continued: “With his commitment to the band and his commitment to music there was a lot of people that passed through his hands in terms of learning to play. He was a great advocate for music and young people getting involved in the band.”

While unable to impart his gifts to his grandson, William passed on his musical talents to his son Patsy who went on to enlist and play in the Royal Marines band.

During his time at St  Peter’s, William played a central role in organising various trips that the band made to parades and events throughout the North.

If not with the band or in the band rooms, he could often be found in the Long Bar on Leeson Street where he would have two or three pints “to help him sleep”, as Pádraig recalls.

As one of the few – if not the only – cornet player in Belfast at the time, William’s talents were often in demand. Although from the Falls Road, bands from the Shankill and elsewhere would often contact him when in need of a cornet player for the Twelfth.

“There were bands on Twelfth, if they didn’t have a cornet player, they would’ve given him 10 shillings to play,” Áine said.

“He was away like a shot up to the field.

“It just goes to show that all the bands knew my granda.

“It didn’t matter if you were pink, blue, yellow, or black if you were stuck for a cornet player.”

“The Long Bar did well on the Twelfth,” Padraic laughed.

He added: “With a name like Billy Boyle you could’ve played anywhere.”

Reflecting on the band’s demise, Áine said it is a “very sad” occasion.

“It was a real treat to see them marching,” she recalled.

Pádraig too can remember the happy feeling of seeing the band in their green uniforms and their “instruments gleaming”.

“It lifted the people of West Belfast.”

He concluded: “When the Troubles broke out that kind of knocked things sideways. I don’t think St Peter’s marched much after that.”