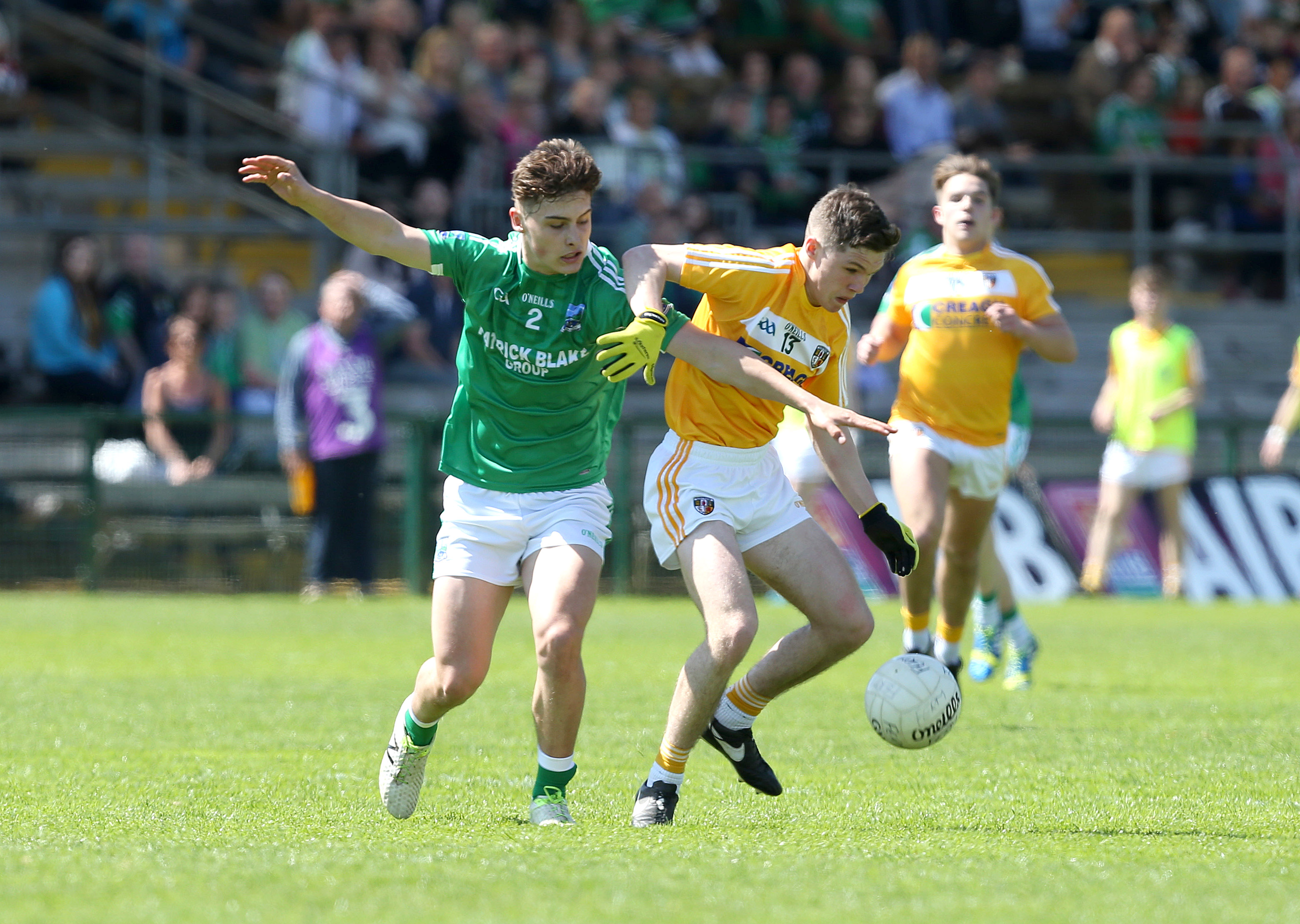 ANTRIM minors recorded their third successive Championship victory over Fermanagh with a seven-point win in Brewster Park on Sunday.
The Saffrons made life difficult for themselves at times but they were full value for their victory.

After conceding an early goal when full-forward Eoin Beacom fisted the ball past Gerard Smith after five minutes, Antrim settled into the game with Kevin Small and Liam Quinn on the mark.

With 20 minutes gone, Michael Hagan levelled the game before linking up with his fellow full-forwards for a stunning goal on the cusp of half-time.
That gave Antrim a three-point cushion at the break and they extended it early in the second when Eoin Nagle grabbed their second goal following a sublime cross-field pass from Eoghan McCabe.

The game looked to be over midway through the second half when Antrim scored their third goal to move nine points clear with Dermot McErlain finishing after a lung-bursting run.
Fermanagh were given a lifeline when substitute Michael Og McGarrigle bagged a scrappy goal but Antrim weren’t to be denied and Small’s injury-time major sealed a trip to Donegal in two weeks’ time.

Manager Hugh McGettigan was understandably delighted at seeing his side progress but warned that a much tougher challenge awaits against Donegal in the next round.
“I thought, for a long period of time, we were the better side and we were comfortable but we tend to make life very difficult for ourselves and today was no different,” said McGettigan.

“We had our opportunities to move on. I think we were seven or eight points ahead at one stage but I felt that we never really got to a safe position.
“We have something to work on from that respect but we have two weeks before a massive game against one of the two favourites for the All-Ireland Minor Championship in Donegal but we’re looking forward to that.”

Antrim landed the game’s opening score via Kevin Small minutes after the Creggan forward missed a straight-forward shot from in front of the posts.
Fermanagh’s first score was also the game’s first goal.

Wing-back Conor McGee chipped the ball into the danger zone and Antrim ’keeper Smith came off his line but couldn’t prevent Beacom from getting the deftest of touches on the ball to guide it into the net.
The Enniskillen Gaels attacker almost repeated the dose moments later - this time his effort went over the crossbar.

Quinn replied for Antrim but his point was immediately cancelled out by a stunning long-range score from Eoghan Curran at the other end as the game started to open up.
The Creggan corner forward was causing the Fermanagh rearguard real problems with his searing pace and he scored 0-3 in an eight-minute spell as the Saffrons took the lead.
A wayward kick-out from Smith went straight to Fermanagh midfielder Darragh McGurn, who slotted the ball over the bar.

Yet, the Lámh Dhearg netminder more than made amends moments later when he made a great save to deny Paul Og O’Reilly from point-blank range.
Antrim then gained the upper hand before the break when the full-forward line of Quinn, Small and Hagan linked up to create their side’s second goal.

Quinn and Small exchanged passes on the wing before Small cut inside his marker and passed the ball across the face of goal to Hagan, who timed his run to perfection before palming the ball into the net.
Small extended the lead to four on the restart before Antrim took control of proceedings with their second major.
The industrious Eoghan McCabe found Eoin Nagle with an exquisite cross-field pass and the St Enda’s wing-forward buried the ball past Gary Doherty to put Antrim 2-8 to 1-4 ahead.

McCabe then got on the scoresheet himself while Patrick Finnegan and Patrick McCormick were impressive at the back for the Saffrons.
Fermanagh’s challenge seemed all but over when Antrim struck for their third goal of the afternoon on 43 minutes.
McCabe was again involved as he slipped a pass through to centre-forward McErlain, who still had plenty of work to do.
With Kevin Small running off his shoulder, the over-stretched Fermanagh defence couldn’t get a tackle in and the Moneyglass attacker was allowed to get his shot on goal, which Doherty never looked like keeping out.

The Erne County were given a lifeline a few minutes later when substitute Michael Og McGarrigle punched the ball into the net after Antrim failed to clear their lines.
Three points from play in quick succession from Fermanagh corner-forward Colm Jones reduced Antrim’s lead to just four points with seven minutes to play.
Antrim’s prospects suffered a blow when Quinn injured himself when challenging Fermanagh’s Dara Dolan along the near sideline. The Creggan clubman landed heavily on his ankle and was forced to retire from the game.

When centre-back McCormick missed a chance to extend Antrim’s lead, Fermanagh sensed an opportunity to salvage something from the game.
The hosts thought they had gained momentum from their opponents three minutes from time when a hopeful punt from Conor McGee was flicked into the Antrim goal but referee Dan Mullan correctly disallowed the goal for a square ball infringement.

Perhaps the scare shocked Antrim into life once more and they sought about getting an insurance score.
It duly arrived in injury-time when the Saffrons plundered their fourth goal with a swift counter-attack.

McCabe got the move going with a neat pass to Small, who played a quick one-two with substitute Malachi Doherty before drilling the ball low into the corner of the net.
It was a fitting end to an enthralling game and McGettigan hailed the endeavour of his squad.

“This team have beaten Tyrone earlier in the year,” said McGettigan.
“I think that was the first time since the 80s that we have beaten them and we’ve beaten Derry in the course of the league as well.
“This is a great group of lads this minor team of 2016.

“We’ve done a lot of work with them and there are a lot of fine players, not only in the squad but in Antrim in general at that age group.
“Hopefully we can build something here but we’re delighted to come here and get the win.

“Brewster Park is a tough place to come and, although they had a couple of injuries, it was never going to be an easy match.”
At times, Antrim allowed their opponents back into the tie with some unforced errors and a few wayward shots.

McGettigan praised the way his side reacted from the various setbacks and hopes they can continue to improve ahead of their quarter-final clash with Donegal on Sunday, May 29 at Corrigan Park (7pm).

“We kicked a few early wides and gave away a soft goal early doors kind of gave us an uphill struggle but this is Championship football and the lads need to react positively to these situations,” added the Rossa clubman.

“We got a goal just before half-time and that gave us a lift but all round it’s about reacting to mistakes. But they’re only kids and they’ll make mistakes.
“If I had any hair left I’d have pulled it out a long time ago!

“I’m used to seeing the mistakes but it’s how the lads react from them that I’m more interested in and I thought the lads responded well.
“We knew that we would have to play Donegal somewhere along the line.

“They beat us by 10 points when we played them in the Ulster League, they were down to 14 men and they didn’t have Niall O’Donnell with them either and he is their best player.
“They’re a good side and it’s going to take a massive effort against Donegal.”