Suspect tortured by the past urged to come forward 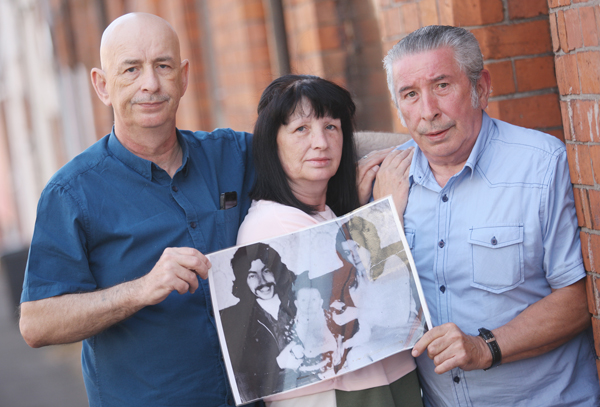 Paddy, Esther and Hugh Dempsey with a treasured portrait at the family home in Hillman Street

The family of a newlywed couple and their baby who were burnt to death in a loyalist petrol bomb attack in 1976 have launched a new appeal for a suspect to come forward and tell what he knows about the murders.

Joseph (22), Jeanette (19) and Brigeen Dempsey (10 months) were killed as they slept in their Hillman Street home on August 27. Speaking ahead of the anniversary, Hugh, Paddy and Esther Dempsey say questions about RUC collusion remain.

“As you go through the years you wonder why,” said Hugh. “You listen to so many cases of things that are horrific but, to me, this is something else. This is a complete family gone in one night.”

On the night of the firebombing that targeted three homes in Hillman Street, 11 men were seen by the RUC outside a bar in Tigers Bay around half an hour before the murders that took place at 3.30am.

Also in those hours, another suspect was seen in a vehicle that the HET report says “police suspected (was) used by members of the UVF”.

That car was seen visiting a nearby garage where five pints of petrol were bought by one of the suspects. Despite this evidence and eyewitness testimony no-one was ever convicted of the attack that made the international press, such was its horrific nature.

The 11 men seen outside the bar were arrested a week later, but all were released. Hugh says their suspicions of collusion centre on the actions of one of the suspects three years later.

“One of the suspects left here and went to Scotland after the attack. In 1979 he handed himself in to the Scottish police and confessed to taking part in the murders but by the time they sent him over here we are told he changed his story and the RUC let him go.

“I think he was got at by the cops. I think he would have implicated people.”

The official report says the 1979 investigation based on the new confession again went nowhere because all the suspects reiterated their denials.

Three, however, made statements under caution admitting to making petrol bombs which they practiced throwing in nearby Hanna Street around the time of the murders.

In the 1979 investigation a man known only as ‘Suspect K’ was interviewed 14 times about the murders. He denied any involvement but also admitted making and practicing with petrol bombs in Hanna Street in “July or August 1976”.

Another investigation in 1986 also came to nothing in the end.

Paddy says reports have continually circulated about the identity of those responsible.

“Another suspect killed himself by setting himself alight on the 35th anniversary of the attack but we don’t know if that’s just coincidence.”

Hugh, who had to identify the bodies, says they just want the truth after all these years.

“If there’s someone out there who knows something and has a conscience they should come forward and tell the police. We just want the truth.

“I don’t care about people getting prosecuted because they’ll serve a few years in jail even if they are convicted. There’s a lot of things have happened and if we’re going to go forward we have to take a bit on each side.”

The loyalist who confessed in 1979 is a key part of the case, said Paddy.

“He’s the weak link in all of this. We understand he is back living in Belfast and we hear he has struggled his whole life because of what happened.”

Hugh said they will keep fighting for the truth. “We want closure.

“We just want to know why they picked that house. The loss of Joe, Jeanette and Brigeen have left a big gap in our lives. We owe it to them to keep looking for answers.”