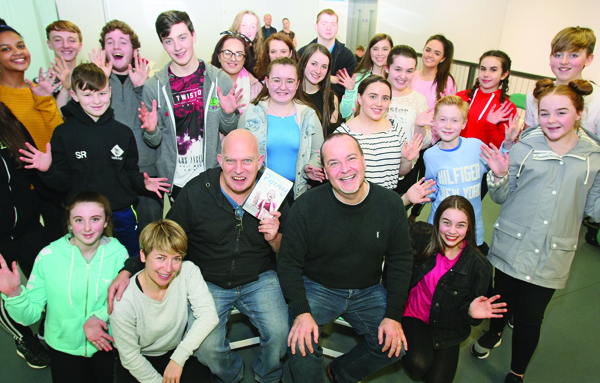 Auditions of Paperboy the musical held in the Falls Leisure Centre with director Steven Dexter and author and retired paperboy Tony Macaulay.

DOZENS of budding young actors from across the city gathered on the Shankill and Falls roads to audition for a musical adaption of Tony MacAuley’s Paperboy.
Special auditions took place in the Falls Leisure Centre, and the Spectrum Centre on the Shankill Road where the novel is set and where the author grew up.
Each year the Youth Music Theatre tour the UK and Ireland auditioning young people between the ages of 11 and 21 in 28 cities, resulting in 300 young people being invited into the YMT Company to take part in a two or three-week residential course. The talented individuals work with professional creative teams to create one of eight brand new musicals, with Paperboy coming to the Lyric this summer. Each participant also receives a qualification from Trinity College London, which accredits all YMT’s activities.
Twelve-year-old Amy Braniff was one of the young hopefuls auditioning at the Falls Leisure Centre on Friday afternoon. The St Dominic’s pupil has a passion for theatre driven by her love of musicals.
“Obviously I love Wicked,” she gushed, pointing at her Wicked hoodie, “and 42nd Street, Wizard of Oz – just musicals in general.
“When I saw this opportunity I wanted to give it a chance and see how it went.
“Today has been a great opportunity to be seen and heard and improve upon our talents even if we don’t progress but hopefully it will be our big break. We’ve been here from 3pm today so almost two hours of dancing, singing and acting – which you wouldn’t be doing if you didn’t have a passion for it”
14-year-old Peirce Barrington Wilson was also hopeful of gaining a sought after spot in the upcoming production hoping to build his portfolio for theatre college in London.
“My wonderful mother, flagging up the opportunity along with my ambitions of being an actor, are what brought me here today. It’s something I have always wanted to do and I am currently looking to study acting in London.
“Hopefully I get a part in the production and hopefully that leads to being discovered and beginning an acting career enabling me to pursue my musical theatre ambitions.”
Paperboy is a heart-warming, coming-of-age, new musical drama that bubbles with humour set against the gritty backdrop of 1970s Belfast on the Upper Shankill Road. The sharply-observed story is seen through the eyes of 12-year-old Tony, working as a paperboy, and is widely praised for its ability to see behind stereotypes.
Author Tony MacAuley said it was ‘wonderful’ to see so many young people from across the divide come together and be part of something big.
“These are special auditions taking place in the Spectrum Centre and Falls Leisure Centre today and we have had a great turn-out with upwards of 20 young people arriving in each centre. It’s an interesting mix of dancing, singing and acting with performance experts talking them through the process.
“There are some people here today with years of experiences and others auditioning for the first time but either way we are looking for raw talent.
“Personally I am keeping an eye out for me,” he laughed. “I am looking for someone I can see as a 12-year-old me and I’m quite excited by the talent here today.”
________________________________________