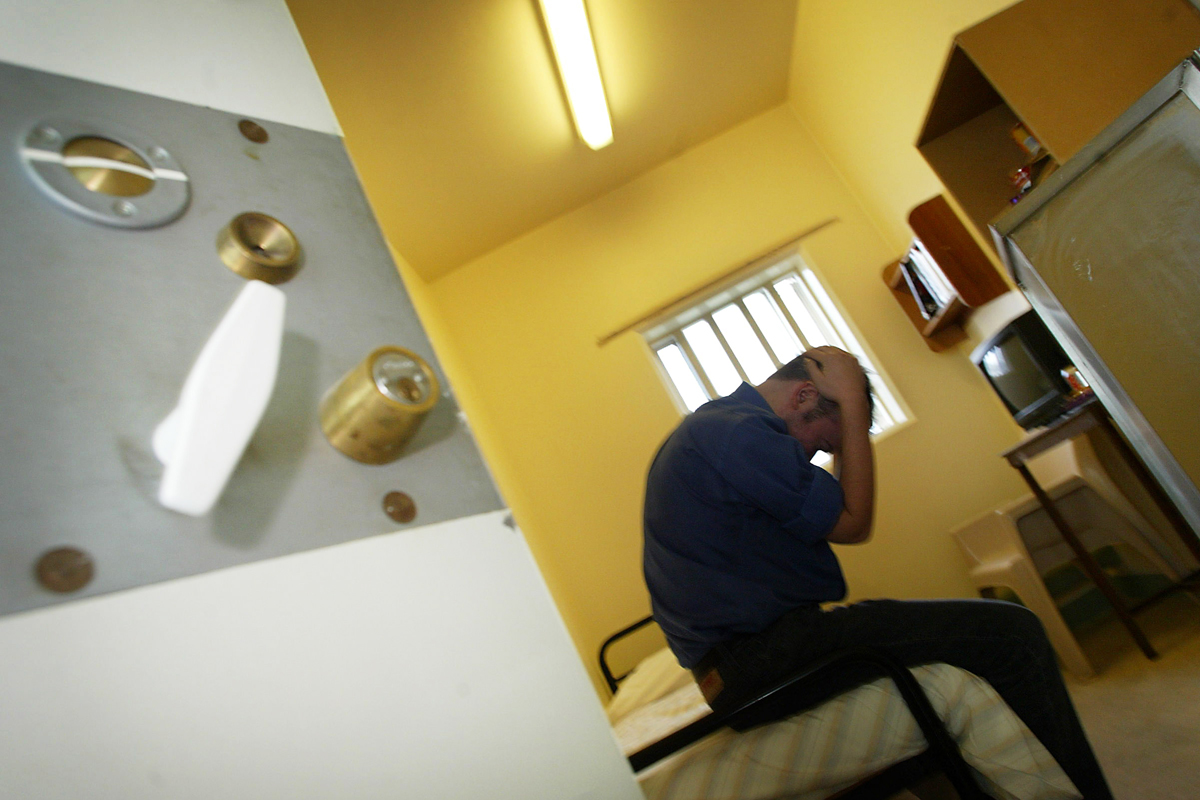 1998: Good Friday Agreement is implemented. Political prisoners are released early on the condition that the groups they are affiliated with are on ceasefire and continue to remain on ceasefire

September 2000: The H-Blocks are closed down. Any republicans arrested after the closure of the H-Blocks are now integrated with ‘ordinary decent criminals’ (ODCs) in Maghaberry prison.

“They were mixed in with loyalists and the likes of paedophiles and so on,” said Brendy Conway, former Maghaberry prisoner and member of the Friends and Family of Republican Prisoners in Maghaberry.

“As the number of republican prisoners increased in Maghaberry over the years they spread them out throughout the prison.”

September 2003: Publication of the Steele Report. Following escalations in the no-wash protests at Maghaberry, the British government commissions a review of conditions at the prison conducted by a team headed up by Sir John Steele, a former Director of the Northern Ireland Prison Service. The report recommends “separation by paramilitary affiliation” of prisoners to help provide a safer environment.  The report recommendations are adopted. Two new wings are now to be built at Maghaberry Prison – Roe House for republican prisoners and Bush House for loyalists.

“On the basis of the Steele Report’s findings, and as part of the agreement then reached between the prisoners and the prison authorities, the prisoners agreed to come off protest until this new wing was built,” said Brendy.

“It was also agreed that the authorities would recognise prisoner structures – i.e. the prisoners would have representatives to deal with the authorities on education, for instance, or the day-to-day running of the landing.”

March 2004: Roe House is opened and republican prisoners move in. However, in a position statement shown to the Andersonstown News, republican prisoners claim the previous agreement with the authorities was instantly reneged upon when the wing was opened and a “criminalisation regime put in place which was again designed to control, degrade and criminalise republican prisoners”. This is alleged to have included: prisoners searched up to six times a day when moving between cells and recreation area; daily cell searches; “degrading” full body strip-searches; prisoners locked up for up to 22 hours a day; three guards to every prisoner when they left their cells.

2004 to 2008: Prisoners begin protesting again, this time in reaction to deteriorating conditions at Roe House. “There were different token protests by the prisoners to get the authorities to change the ratio of guards to prisoners,” said Brendy.

2008 to 2009: Talks and debates begin between the republican prisoners to decide how best to move the protest forward and improve the conditions for republican prisoners.  “We identified the main areas that we wanted dealt with before we would come off protest,” said Brendy, who was then a prisoner in Roe House.

“These areas were: the controlled movement of prisoners;  the full body strip-searching of prisoners; recognition by the Prison Service that republican prisoners were not ordinary prisoners and therefore should be treated differently.  Strip-searching and controlled movement were the two main areas that we wanted movement on. I was involved in those negotiations and we came to an agreement on how we were going to do it. The first stage of that took place in April 2010.”

April 4, 2010: The prisoners barricade themselves into the canteen area of Roe House for 36 hours. “We were then forcibly removed from the canteen and returned to our cells,” said Brendy.

“After that the protest inevitably increased through April, May and into June. There were 28 prisoners on the two landings in Roe House and all of them were on full protest, which was throwing our waste on to the landing.

“On one occasion West Belfast man Harry Fitzsimons had a disagreement with an SO [senior officer]. He went out for an hour’s exercise, came back and after lunch a riot squad was sent into his cell and severely beat him.  They pulled him off the wing and put him in the SSU (special supervision unit), handcuffed him to a bed, cut his clothes off and strip-searched him. That evening when they took him off the wing all the prisoners wrecked their cells, which signalled the start of the protest escalating.”

The new no-wash protest saw prisoners putting their waste out of their cell doors and windows and refusing to wash.

June 2010: Facilitation between prisoners and the Northern Ireland Prison Service begins. As the stalemate between the prisoners and the prison authorities deepens, the group Family and Friends of Republican Prisoners in Maghaberry is formed outside the prison to raise awareness of the prisoners’ plight. By the end of June a facilitation group made up of Derry community worker Conal McFeely, Peter Bunting from the Irish Congress of Trade Unions and Dr Ram Manikkalingam from the Dialogue Advisory Group enters the prison to help mediate a deal between the prisoners, the Northern Ireland Prison Service and the Maghaberry prison administration.

“The prisoners debated this [the involvement of the facilitation group] and agreed to it, under certain conditions – that we would speak to them frankly and at all times be in control of what we were doing,” said Brendy.

“A 10-man negotiating team was then set up by the prisoners to speak for them, who then elected two people to speak on their behalf, who were myself and Colin Duffy.”

The prisoners’ two main demands are: an end to strip searching and for more humane and less intrusive methods to be used instead; the end to controlled movement.

“We met facilitators and then met directly with prison governors,” said Brendy.

“The governors said they were willing to look at our demands, but only if the prisoners came off protest, which we refused.”

August 6, 2010: A “final proposal” is offered by the prison that does not address the prisoners’ two main demands. “The facilitators told us there was nothing more that could be done,” said Brendy.  “So the prisoners decide to increase the protest in jail, which led to a cessation of visits and an increase in tension in the prison.”

August 11: Facilitators re-enter the prison with a new agreement ending full body strip-searching. “It was supposed to remove the practice entirely from within Maghaberry, except in two circumstances,” said Brendy.

“One was if intelligence-led information suggested that a prisoner was smuggling stuff in and this information could be stood over by a credible third party (video footage etc).  Secondly, if the technology we agreed could be used in the new search indicated that there was something there, a full strip-search could be carried out. So we gave them room that they still had an opportunity to carry out strip-searching in certain circumstances.”

The technology the prisoners agreed could be used in place of full body strip-searches includes a BOSS scanner, effectively a metal-detector chair.

“We agreed that if we were leaving the prison to go on visits or go to court we would remove our footwear, belts and outer coats and put them through an airport-type scanner,” said Brendy.

“We would then be given rubdown searches, scanned over with a metal-detector and seated in the Boss chair.  We agreed on that and accepted it.

“The prison staff were always concerned that it would go back to a Maze-type scenario where there would only be a small amount of guards on the wing at any time.  But we never negotiated for the removal of prison officers from the landing, if there had to be 50 of them we didn’t care as long as it didn’t impede our freedom of movement, i.e. that as prisoners our doors should be opened in the morning and we could move freely about our landings, canteen and yard.”

August 12, 2010: The Roe House agreement is signed. “Within the first few days there were teething problems on controlled movement – which we allowed for – for instance they were not allowing six out at a time as the place was upside down with tradesmen in working etc,” said Brendy.

“But right to this day they have never let six prisoners out as the guards were refusing to let that number out without 15 to 16 staff on the landing.”

September 23, 2010: First forcible full body strip-search since Roe House agreement is carried out on Brendy Conway as he is leaving for court appearance. “I was told to strip but I flatly refused as it was not part of the Roe House agreement,” said Brendy.

“I was told by guards it was part of the agreement as reception was not covered in the agreement.  A big argument then started between prison governors and myself and during this I was forcibly removed from the reception area, brought to the punishment unit of the prison where I was pinned to the floor and forcibly strip-searched.”

Prisoners opt not to go back on protest but to inform facilitators of the agreement breach against Brendy Conway. The recently inactive group Family and Friends of Republican Prisoners in Maghaberry is reformed on the outside.

On the first day the new search facility at Roe House is used a mouth search is introduced on prisoners which they refuse to cooperate with.  This sparks a stand-off between prison staff and prisoners in the run-up to Christmas which leads to the cessation of prison visits. Facilitators are brought in again and it is agreed that conversing between prisoner and guard would be seen as acceptable in place of a mouth search.  Visits begin again in the week leading up to Christmas.

Early 2011: Prisoners continue meeting with facilitators and political parties visiting the prison while the Family and Friends group continue their campaign on the outside.

May 5, 2011: Prisoners begin protest again. The Prison Service makes it clear to facilitators that the agreement did not cover strip-searching in reception area.

“The prisoners deemed the agreement as effectively over as authorities were no longer adhering to it,” said Brendy.

“Prisoners then wrecked their cells and began a no-wash protest again. What needs to be made absolutely clear is that as far as the facilitators were concerned their interpretation of the Roe House agreement of August 12, particularly in regards to full body strip-searching, was always in line with the prisoners’ interpretation.”

October 2011: An independent review into the Northern Ireland Prison Service is published. The independent review, commissioned by the Minister for Justice David Ford and headed up by Dame Anne Owers, finds the Prison Service here “dysfunctional” and “ineffective”. One of its key recommendations is the need to do away with full body strip-searching in favour of using other technologies.