The beautiful little bird with the big attitude 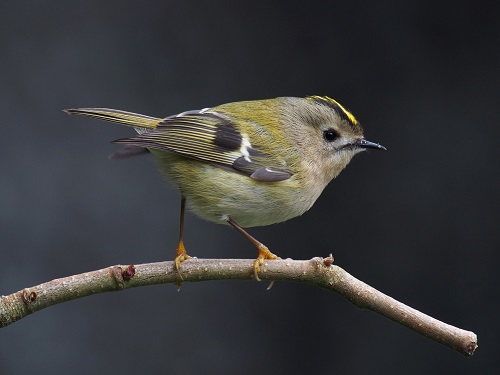 IT couldn’t be easy knowing you’re going to end up in a sparrowhawk’s stomach – and sooner rather than later.

That’s the fate of the vast majority of our goldcrests. These tiny birds – the smallest in Europe – weigh the same as a single sheet of paper. But for sparrowhawks they’re a delicacy and they gobble them up like we’d go through a plate of chicken wings, even though the five-gramme bird would hardly fill a gap it their proverbial tooth.

It’s sod’s law that this unluckiest of birds happens to be the most beautiful – it’s fact it’s stop-in-your tracks stunning. This week one appeared out of the blue in the holly tree in Dúlra’s back garden, in constant motion as it scanned the underside of leaves for minuscule insects. If you think a wren is small, you ain’t seen nothing yet. This bird is more like a butterfly.
But the goldcrest in Dúlra’s garden will live on average just eight months. That’s the shortest lifespan of any bird in the world. So the goldcrest holds two records – a European title as the smallest bird and a world title for the shortlest life – what a double!

Goldcrests, cíorbhuí or yellow comb in Irish after the stripe on its head, have always loomed paradoxically large in Dúlra’s birdwatching life. He remembers being amazed as a kid when an older lad found one of their nests high up in a spruce tree beside the Christian Brothers’ Airfield House at St Mary’s school.

He remembers looking up from the ground below at the speck on a distant branch that was probably the smallest nest in Europe, only believing it when the tiny bird made its way to the nest like a mouse crawling through the branches. But then years later he found his own goldcrest nest in Colin Glen – but this time it was, incredibly, at head height, on a branch of a fir tree that was overhanging the path. We’d walked under it for weeks on each fishing trip before we finally noticed it.

The eggs – 10 – looked too delicate to touch in their feather-lined cocoon and unfortunately mobile phone cameras were still in the future so it’s captured only in Dúlra’s mind.

But amazingly, one of Dúlra’s present day hillwalking pals says he’s never seen a goldcrest. And in that, he’s probably representative of this paper’s readership.

But anyone who’s stepped foot in one of our parks or into Colin Glen has certainly heard them. Goldcrests emit a thin ‘zee’ call every three or four seconds as families of them feed on the treetops. It’s only at this time of year when breeding is over that they abandon the bigger trees and head into gardens.

And they’re actually tame and inquisitive – it’s only sparrowhawks that they have to fear, after all. Every winter they have to choose between risking starvation by staying put or facing the perils of migration. Those who head south to Europe are replaced by others who arrive here from Scandanavia.

And because they don’t fear us, people walking our coastlines have even reported that tired birds have actually landed on them, tip-toeing over their clothes searching for insects!

We mightn’t notice them, but they are far from rare. And in fact in the list of endangered birds, they are among those of least worry. They love conifer trees and so have benefited from the growth in forests – in fact their biggest concentration recorded was in Ireland where 1,530 birds were counted in a square mile of trees – 60 per cent of all the birds there.

And so the tiny, cute goldcrest might just appear in your own garden this autumn, although you might need glasses or even binoculars to identify it. Although you won’t need glasses to see the sparrowhawk that inevitably won’t be far behind it...
If you’ve seen anything interesting or have any nature questions, you can text Dúlra on 07801 414804.

Reader:  I have a nestbox that had a family of blue tits in it this year – when can I remove the old nest and clean it out?
Dúlra writes: You can do that any time now so it’ll be ready for spring – and birds might also use it over the winter to roost in.