They just can’t get enough of Shirley 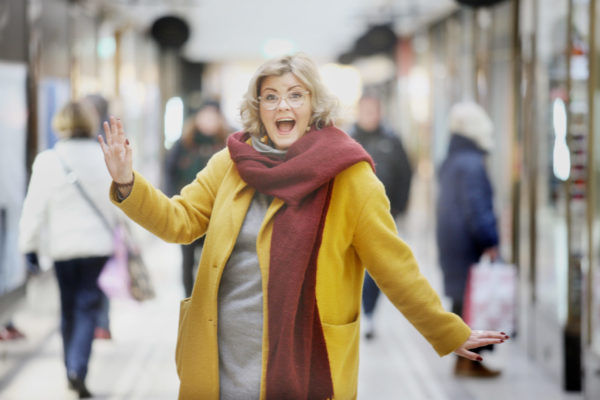 REPRISE: Tara Lynne O’Neill is back at the Lyric with Shirley Valentine and she’s about to start filming the latest series of Derry Girls

PATHOS, poignancy, hilarity and a fortnight in Greece will collide once again as Tara Lynne O’Neill revives her Shirley Valentine on the Lyric stage this month.
Before the initial Shirley run back in September, she had been approached to play one of Willy Russell’s most iconic creations by Lyric Executive Producer Jimmy Fay, a part, at the time, she had no hesitation in accepting.
15,000 words of script later, Tara Lynne, along with director Patrick J O’Reilly, is preparing to bring the housewife back along with a lot of “sun shimmer” for a limited run at the end of this month.
When we meet, Tara has just returned from Dublin where she was reading for Embrace a Giant Spirit, a Seamus Heaney showcase in Christ Church were she read his poem, Markings. In between dodging the last remnants of Storm Ciara, the former St Genevieve’s High School pupil and Derry Girls actress is warm, funny and straight talking about how her version of Willy Russell’s creation is “very much of this particular period in time”.
She said: “Audiences have come with their friends, then they’ve come again and brought their mums, mother-in-laws, it’s phenomenal. Audiences feel like Shirley and it’s a gift that they want to give to other people. With the character of Shirley, I suppose it’s that thing that people always talk about, about being a ‘strong female lead’. Well, what is a strong female lead? To me, a strong female lead is someone who is flawed, they show their flaws. Shirley is just every woman and that is what is beautiful about her. The character of Shirley has so many dilemmas that every woman faces, no matter what we are.
“In the play Shirley talks about being back in school, she believed that good things were not meant for her.
“A lot of us come out of school feeling like that or afraid to try stuff because we are afraid to fail.
“I’ve been asked to contribute to a piece ITV are doing for International Women’s Day in March – what would you say to your younger self? The only thing I would say to my younger self is to try stuff, fail, if you fail what is the worst that can happen? You get back up and you do it again, you do it better. This industry is constantly trying, but you can also play it safe. Shirley has been afraid to make mistakes her whole life. She’s got the 2.4 children, the nice house, it’s spotless, the husband, Joe, he’s out working, there isn’t much more she can do. It’s basically a question then of, ‘Is this it?’
“Yes, Shirley is 43 and when I say that on stage people laugh because today, in 2020, it’s so young. But actually 30 years ago 43 seemed older, people acted and carried themselves older. I’m 43 and I go, ‘Well, I’m young.’ We’ve come a long way, I think.”
During the production’s initial run, Tara Lynne spoke of how, post-show, she had some “brilliant, absolutely incredible conversations” with women and men of all ages.
“I had women in their 90s want to talk about the play, sixth form students talk to me about how they related to it.”
Tara Lynne said that the revival of the play is also a fitting tribute to her friend and assistant director, Julie Maxwell, who tragically passed away last August during a night out in the city centre.
“I know we all will truly miss her, I truly miss Julie, I have all the notes that she gave me during our first run of rehearsals. I feel that the success of the show and its second staging is a good way to honour her.”
When the curtain comes down on this run, Tara Lynne will be preparing to start filming for the juggernaut that is Channel Four’s smash hit Derry Girls. Playing Ma Mary, the matriarch of the Quinn/McCool clan, Tara Lynne has gained something of a cult following with her 90s perm, jumpers and ‘punt purse’ throughout the show’s two series.
“We will hopefully be getting the script soon and I’ve no idea what is in them yet. We will be filming May through to July and I can’t wait to see everybody and the third series will be out later in the year. I’ve also written a play for the Belfast Festival later in the year so it’s very much a case of watch this space.”
•Shirley Valentine will return to the Lyric Theatre from February 27 until March 15. For ticket information visit www.lyrictheatre.co.uk