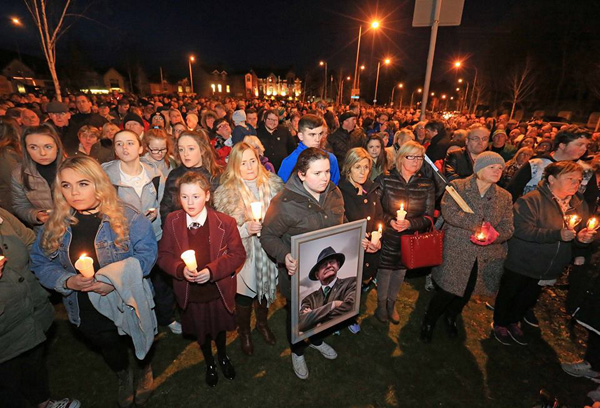 The front of the large crowd at the West Belfast tribute

The Sinn Féin politician died in hospital in the early hours of Tuesday morning with his family by his side.

Mourners gathered at the site of the former Andersonstown Barracks to hold a candle lit vigil to remember the life of the republican leader.

Renowned singer Grainne Holland led the tributes with moving renditions of ‘The Bold Fenian Men’ and ‘Back Home in Derry’.

West Belfast MP Paul Maskey told the crowd that Mr McGuinness was a man determined and committed to delivering a better future for all.

“It’s great and truly fitting to see so many gathered here this evening to show solidarity and respect to Martin and pay homage to a man who was determined and committed to delivering a better future for us all,” he said.

“Martin made himself available to the citizens of Ireland. Nothing was too much for him. He fought for justice, equality and respect.

“Throughout his life Martin showed great determination, dignity and humility and it was no different during his illness. The struggle came first always.

“He led by example, he led from the front, he was a patriot, he was a peacemaker and he was a reconciler.”

Similar vigils were also held on Tuesday evening across the island of Ireland including in Derry, Dungiven, Galway and Dublin.

Mr McGuinness’s funeral will leave his home in the Bogside in Derry at around 1.20pm on Thursday ahead of Requiem Mass at St Columba’s Church Longtower at 2pm. He will be buried in the City Cemetery.