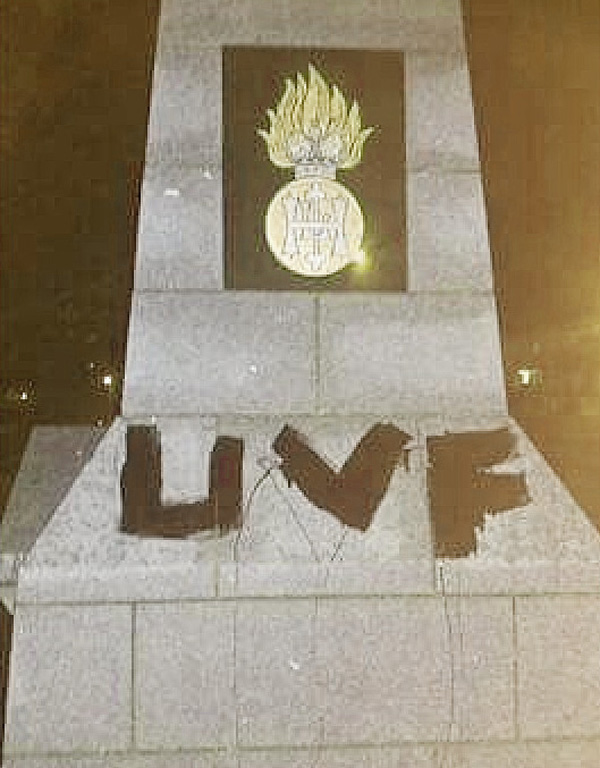 The vandalism has been blamed on the Scottish UVF

THE latest attack on a memorial to three British soldiers killed by the IRA in the 1970s has been blamed on the Scottish UVF by one of the dead men’s relatives.

The man, who does not want to be indentified, told Daily Belfast he believes the attack was carried out because of ongoing tensions in Scotland sparked by at least one member of the organisation in Glasgow collecting money on behalf of the memorial fund for the soldiers and pocketing it for himself. The relative said the money was repaid but the bad blood still exists.

Brothers John and Joseph McCaig and Dougald McCaughey were killed by the IRA in 1971 after being lured to Ligoniel from a city centre pub where they had been drinking. The Royal Highland Fusiliers, aged 17, 18 and 23, were off duty at the time. A memorial at White Brae to the three soldiers has been repeatedly attacked in the past with one man jailed for his part in the vandalism.

However, a second memorial to the men on Ballysillan Avenue had never been subjected to attacks before last week, when ‘UVF’ was daubed on the substantial memorial.

“A lot of things happened before this,” said the relative. “Charity tins were stolen five years ago and the UVF man responsible was confronted about this. This money was refunded but about 18 months ago memorial parades to the three soldiers started being sabotaged.

“This year, the justice campaign had 19 bands agree to come but 17 of them were told to stay away and only two showed up. At the social function after the parade a lady was lined up to sing but she was told to stay away. These individuals were in Northern Ireland last weekend. Any other time the memorial has been attacked at White Brae it’s been nationalists and republicans but all of a sudden the other memorial is being attacked. I think it’s to get a dig in. I couldn’t believe it when I saw the pictures of the attack. It left me very upset.

“People have approached me to say they are disgusted with what has happened. This happened in an area where there’s a fondness for the three boys.”