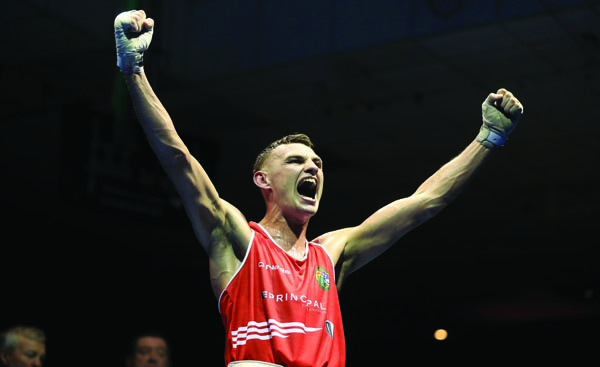 IT was a great night for local boxers at the National Stadium on Friday night as Brendan Irvine, Sean McComb and Kristina O’Hara all claimed National Elite titles.

Irvine retained his flyweight title with a unanimous decision victory over Thomas McCarthy to cement his place on the Irish team that will travel to the European Championships later in the year.

The St Paul’s man was in control throughout, dominating each of the three rounds and looked to have McCarthy in trouble on several occasions with his increased punching power evident.

The Glencolin man was delighted to retain his title and was appreciative of his travelling support on the night.

“I felt really comfortable. Credit to him, he's (McCarthy) a lovely lad,” he said.

“I respect him, he's a nice fella, but I'm delighted to lift another Irish Senior title, not just for me, but for my club and my family. It's a great honour for me to be sitting here. All those kids from St Paul's club look up to me as a role model so it's great to give them something back down here. They love that, the buzz and getting to see what it's like on a big night. I'm just proud I could deliver.”

Another man who delivered was Sean McComb who became a two-weight champion with his win over Wayne Kelly in the light-welterweight final having previously won the lightweight title on two occasions.

McComb boxed patiently throughout, using his reach advantage to score throughout and control the contest.

Kelly did try and make a fight of it by stepping inside and letting his hands go, but was getting picked off with counters as the Turf Lodge man prevailed on a unanimous decision.

"It was the sort of fight I expected - cagey, in-and-out," he said after,

"Wayne has a very good boxing brain and he is training at the High Performance for the last two years, so he knows what he is about and he is a very tricky operator.

"I said my reach would come into play. The first and second rounds were very tight, but I felt I was landing the cleaner punches. In the third round, my plan was just not to get hit because if you don't get hit you can't lose and that's what I did. You could see him getting more frustrated and coming into my range a bit more, but (I threw) single jabs and single left hands."

It was a bust night in Dublin with the women’s finals also taking place and in the first fight of the night, St John Bosco’s Kristina O’Hara claimed her fist Irish Elite title as she overcame Sharon Sweeney in the 48kg final.

The West Belfast girl was on top from start to finish and boxed brilliantly, throwing her punches with venom and bloodied the nose of the St Anne’s girl in the second round.

Indeed, a huge right forced a standing count in the third round as she continued to force the pace and finished up a worth winner with all five judges giving her the nod.

“It's every boxer's dream to be champion of Ireland. It's unbelievable, I feel brilliant and so proud,” said the Bosco girl who took a year out from competition to develop into a senior boxer.

“It (the break) paid off big time. I changed clubs, moved from the Emerald to the Bosco. I have to give so much credit to Harry Murray who was my first coach. He encouraged me every day, had me in the gym every day and he is the reason why I won this Irish title.

“Of course, I have to thank my coaches now, my best friend Gerard McCafferty and all the coaches at St John Bosco and the sparring partners from Gleann, Townland and Padraig Downey from my own club. These kids are going to take over the world. I have them to thank for me winning this.”