OPINION - ANDRÉE MURPHY: UK’s contempt for rule of law has brought us here 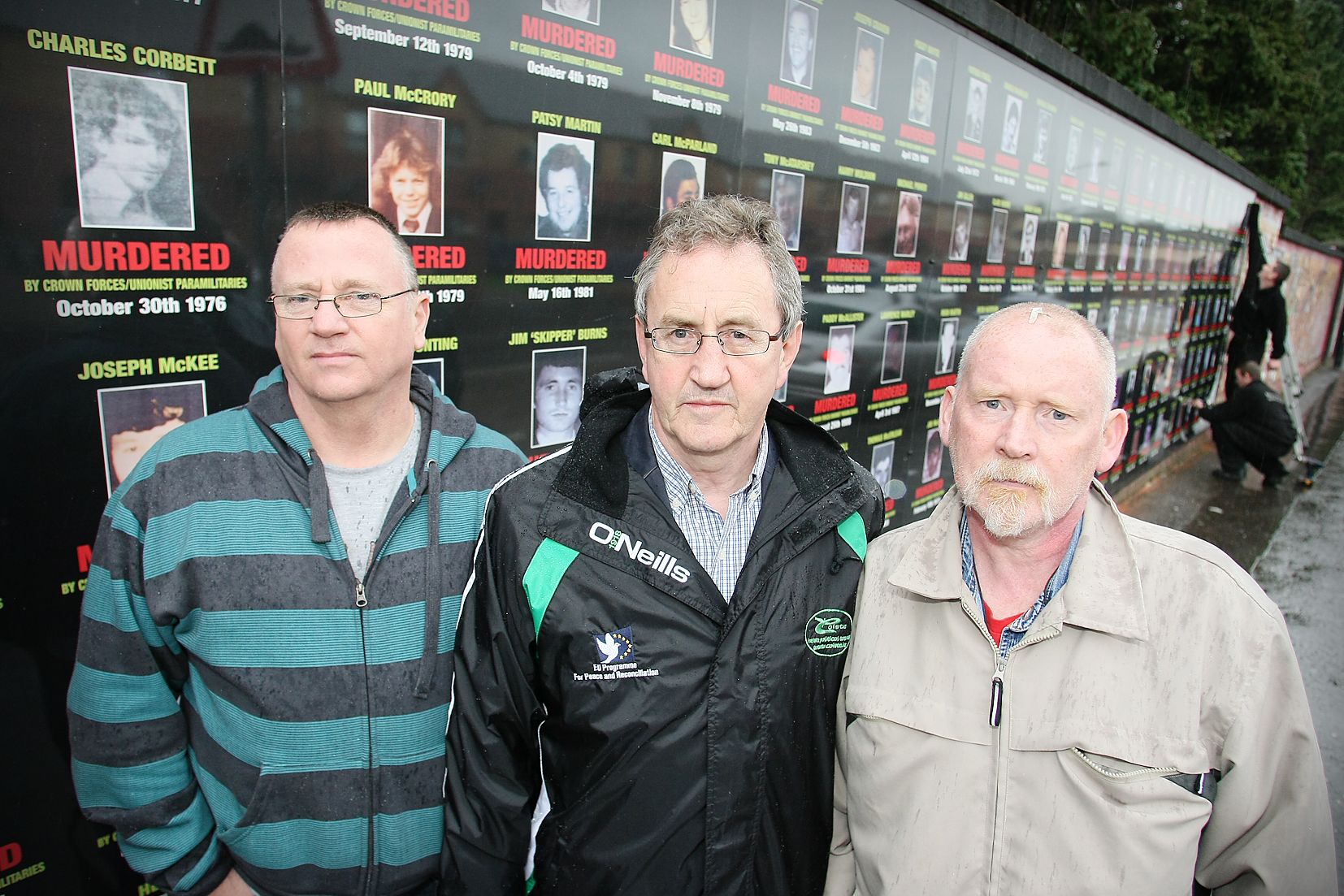 FLASHBACK TO 2009: At unveiling of Collusion Wall in Beechmount Avenue were Sean Osbourne, Michael Culbert and the late Seando Moore.

When Theresa and Hugh Jordan walked into the Relatives for Justice offices on May, 2001, they knew that they had made history. They’d challenged the British government in the European Court of Human Rights regarding the RUC killing of their son Pearse. Their case, along with other families affected by state violence and collusion, was that the British government failed in its duties to independently investigate the killings. At a packed RFJ press conference in An Chultúrlann, the families were asked to respond to the statement by the British government that day that this was “merely a procedural matter”.

Mairéad Kelly, whose brother was killed at Loughgall, raised an eyebrow and said: “It was procedure relating to my brother’s right to life.”

In the 19 years since that judgment the families, and particularly the Jordans, have been forced to return to domestic courts and to the Council of Europe, which supervises European Court judgments, every six months to explain to the Committee of Ministers how the British government still disregards international law relating to citizens’ right to life.

Even for those of us who knew that collusion was a fact of life in the north, who were abused at the hands of Britains forces & proxies in the Brot army, the RUC, the UDR/RIR, the unionist murder gangs, it is still shocking to see the cold hard evidence laid out.#UnquietGraves

Two weeks ago the Committee, after 19 years, finally lost patience. They have given the British government until mid-October to come up with detailed timetables and legislation to ensure that there is a full independent investigation into the killing of Pat Finucane and, similarly, a full legislative timetable for the investigation of all cases involving state killings and allegations of collusion with human rights compliance.

International human rights law has rightly been at the centre of our discourse on how to investigate the past. Victims and survivors living on this island are the holders of rights under the European Convention of Human Rights, under the International Covenant for Civil and Political Rights and under the Convention Against Torture. Those rights are enshrined in international legal doctrine. The United Kingdom is not only a signatory of these covenants, it is a founding legislator. This should be a proud post-World War Two tradition. Domestic legislation cannot subvert that truth or those laws. Unless, of course, the British state wishes to join the small international league of pariah states.

Some try to divert attention from law when it comes to dealing with the past in Ireland. Some wish to pretend it is a “community relations” matter, that somehow these enshrined rights are negotiable or subject to state benevolence rather than duty. Victims and survivors have not accepted this diversion. They are not agitators when they use the courts to assert and vindicate their rights. They are citizens, ensuring that the promotion of human rights and law are correctly contributing to healing and recovery, rather than being used as shields for state impunity.

It is not without irony that, unlike Westminster legal scandals of last week, the significance of Europe’s findings was generally overlooked. There was little media interrogation of the findings, or the Irish government’s robust response, which was to point to the attempts by the British government to tear up the Stormont House Agreement and renege on the New Decade New Approach commitments to legacy legislation.

But families noticed, and no doubt it strengthened their resolve.