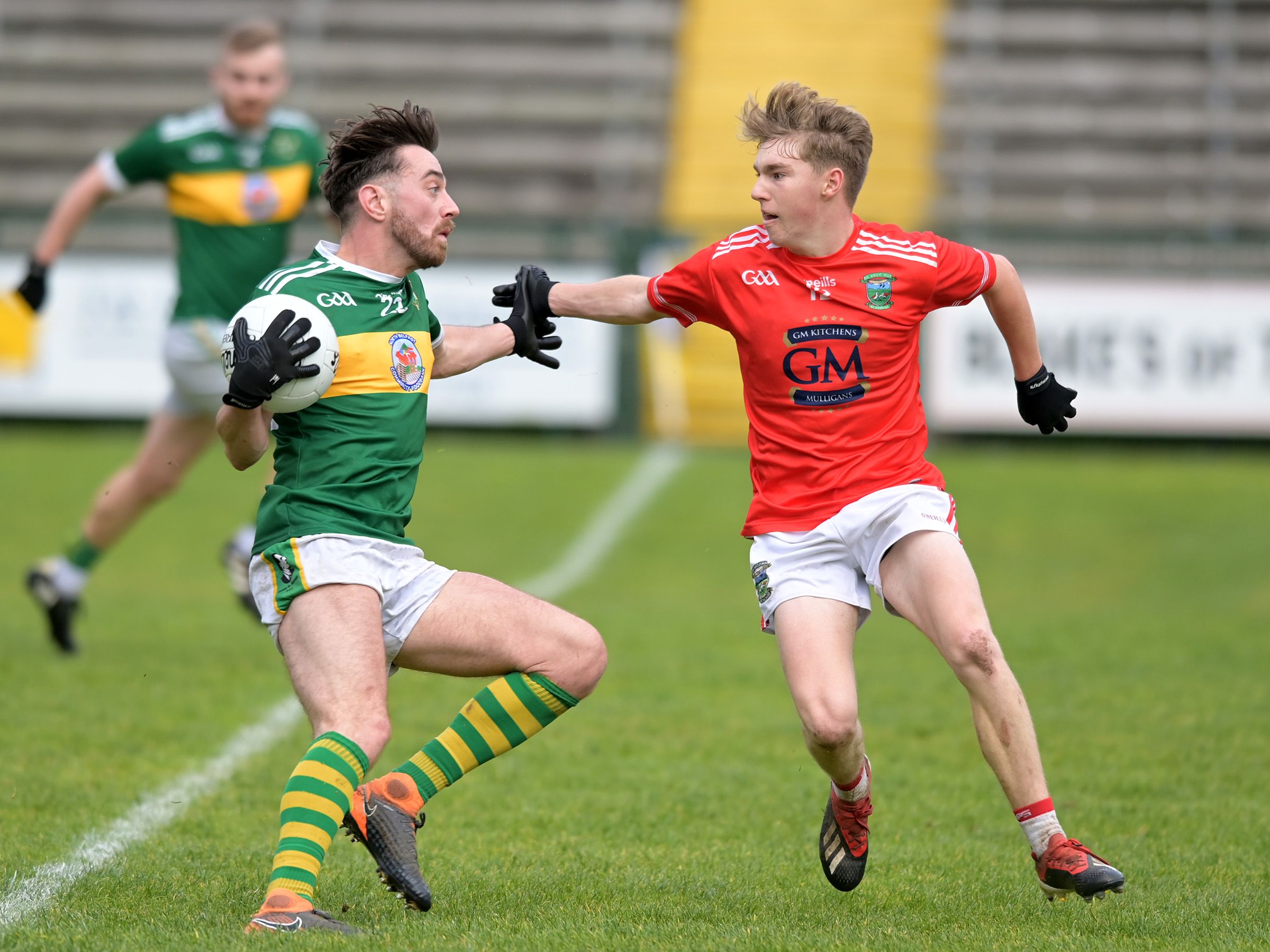 IT wasn't to be for Pearse's on the provincial stage as they were overpowered by Newtownbutler First Fermanaghs in the Ulster Club Junior Football Championship quarter-final at Brewster Park on Sunday.

The Ernesiders were just sharper, strong in the tackle and found their men without fail as they tore through the Belfast outfit from the off and were out of sight by the break.

Much of that was down to a second-quarter scoring burst including two goals in the space of three minutes for veteran Ryan Carson after the visitors had seemingly grown into the game after a slow start.

But when Newtownbutler put their foot on the gas, there was no stopping them despite the best efforts of Pearse's goalkeeper Niall Largey who made some big saves to ensure just three goals were conceded.

"Goals win games and unfortunately we conceded too many soft ones," said Pearse's joint-manager Marcus Kelly.

"Credit to Newtownbutler as they were very strong, first to most balls and unfortunately, you can't start the way we did and expect to win games.

"They were very clinical up front and really made us pay. I thought we kept Diarmaid King relatively quiet even though he still scored a bagful, but they had other players weigh in and were worthy winners."

Newtownbutler flew out of the traps and were on the board within 15 seconds through O'Keefe.

Diarmaid King and Ryan Carson then opened their accounts for the day as the hosts scored with their three opening attacks.

Pearse's needed something to settle them and on six minutes they got off the mark as Liam Deegan's free dropped to Stephen Fitzsimmons to lash over.

Fionn Grew then kicked a free and on 11 minutes they were level as Sean Moreland found himself through but shot high when goal was very much on.

Newtownbutler would not pass up their first goal chance just two minutes later as Daniel McDaid played a delightful ball into O'Keefe whose finish was assured.

While Fitzsimmons hit back with a point at the other end immediately, this game would soon completely get away from the North Belfast men as after Ryan Carson shot over when leaning back, he would get the first of his two goals in the space of three minutes as a flowing move saw Ryan Rooney play a one-two with Jason Flanagan before feeding inside for Carson to palm home.

After he kicked a point, then came another goal with the Pearse's defence gone walkabout and King passed into the unmarked Carson to rattle the net.

The Ernesiders had the ball in the net for a fourth time but play had already been called back for a penalty and Conor Courtney dusted himself off to shoot, but Pearse's goalkeeper Niall Largey got the most feint of touches to push the ball onto the post as they cleared.

But there would be no let-up from Newtownbutler who were pouring forward in waves as Ger O'Keefe kicked back-to-back scores and Diarmaid King another to leave them 3-8 to 0-4 up at the break.

The heavens opened at the break but this proved no handicap to the hosts early on as King kicked a free.

Pearse's then had a sniff of goal when a free broke to Fionn Grew, but his shot was deflected out for a 45.

A quick move through the hands at the other end resulted in a point for Connor Courtney, while the day went from bad to worse for the North Belfast men as Stephen Fitzsimmons was shown red for lashing out at James Connolly.

Piaras Donaghy ended a scoreless 30 minutes for Pearse's from a free, while James Begley got on the board from play.

They were hunting goals and were applying pressure, but half chances came and went including James Smyth shooting straight as Gary Mullaney with his first touch when introduced.

The goal did eventually come five minutes from time when Liam Deegan did well to move up to the end-line and squared for Smyth to palm home.

It was mere consolation and indeed, it was Newtownbutler who finished with a flourish, rattling off six points in the closing stages including one from substitute Frank Mulligan that drew a huge roar from the Fermanagh contingent, while Pearse's finished with 13 as Darren O'Neill picked up a second yellow card in stoppage time.

Disappointment on the day, but there are still plenty of positives to take from the tear having claimed the Antrim Junior title.

A commanding win for the @FermanaghGAA men, they book their place in the final four of the Junior Football Championship! #ClubMeansMore

"Looking at the bigger picture, it was a successful season," Kelly added.

"We brought silverware back to North Belfast for the first time in 54 years, so it is still massively positive. But we feel to progress in the Antrim leagues, these are the games we need to be competing in. until we are competing at this level with success, it will be difficult to progress through the leagues in Antrim and onto Intermediate and Senior.

"The age profile of this team is good as we have young lads and it was only in the latter part of the season where we had our full squad, so we'll enjoy the off-season and then dust ourselves down and get back at it for next year."