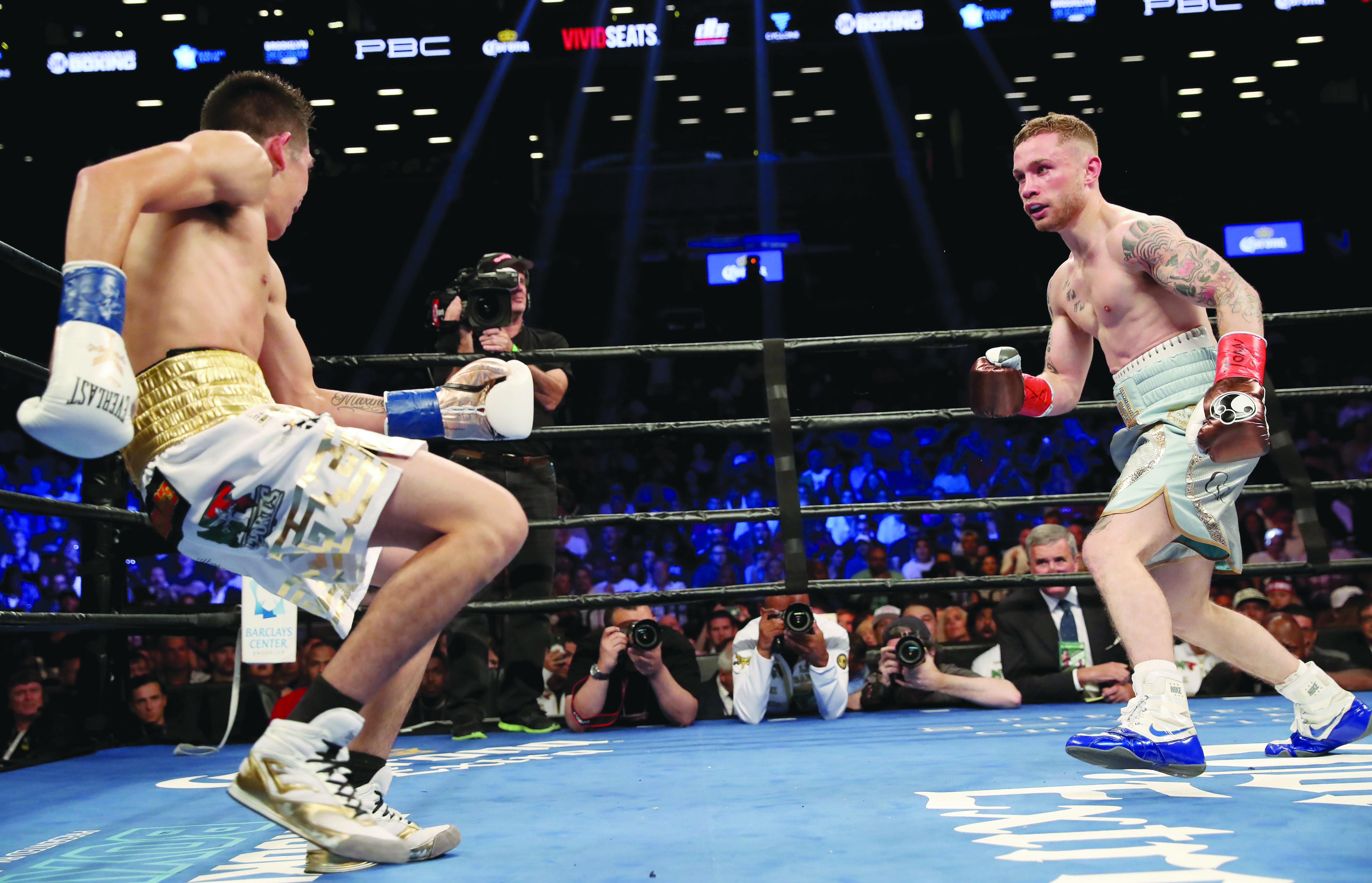 IF Carl Frampton had reached legendary status in his home city prior to the weekend, his victory over Leo Santa Cruz at the Barclays Centre in Brooklyn, New York on Saturday to claim the WBA featherweight title catapulted him to global superstardom.

Now a two-weight champion, Frampton continues to make history and must now be ranked the best Irish boxer of modern times if not all time.

One can not understate what ‘The Jackal’ achieved on a night that will be remembered in his home city and further afield for so long as boxing gloves are laced up.

The 29 year-old didn’t just upset the odds and dethrone a three-weight champion in Santa Cruz, it was the manner of his incredible victory.

The theory for some going in suggested that Santa Cruz’s volume punching and non-stop pressure would overwhelm Frampton, but in fact it was the Tigers Bay native’s predictions that his punching power would make ‘El Terrimoto’ think twice about unloading as much and the switch to featherweight would reinvigorate his energy levels that proved correct.

It was a long wait until MC, Jimmy Lennon Jnr read out the scores after a thrilling 12 rounds that must surely rank as one of, if not the best 12 rounds in a boxing ring this year, but the roar from the huge Frampton support when those words: “And the new” were heard could have lifted the Barclays Centre roof off.

“I think that’s going to be a fight that will define part of my career,” said a beaming Frampton after.

“I want to be involved in big fights and tonight I’ve made history. I’m the only Northern Irishman to win world titles in two different weight divisions and I’ve just beat an incredible fighter in Leo Santa Cruz - a three-weight world champion.

“I think one of the judges had it a little bit wider than it should have been if I’m honest. I could have made it easier on myself, but I fought with my heart at times instead of my head. I think I just wanted to be involved in one of those fights and I think people will remember that for a very long time.”

Certainly, this is one that will not be forgotten for a long time as both men emptied their tanks and served up a 12 round battle that was a credit to themselves and their sport.

Frampton knew he needed a good start to give his rival something to think about and the second round must rank as one of the best in his career. After an exhibition in footwork and counter punching, he connected with a left to the temple that sent Santa Cruz staggering back onto the ropes and for a moment, seemingly on the verge of at least touching down. He followed with a huge right that would have dropped lesser men, but Santa Cruz showed his toughness to ride out the storm and see out the round.

This was to set the tone for the next few rounds as Santa Cruz looked reluctant to throw his punches in bunches for fear of taking another huge shot that may just have left him in serious trouble. When the Mexican did attack, he was made to miss due to Frampton’s exquisite footwork with the timing of his counters - especially a thudding uppercut in the third - helping him bank the rounds.

Perhaps it was an exercise in machismo from Frampton in six and seven that saw him willing to stand in the trenches and trade as this started to offer the defending champion a way back in as both men ripped in combos to body and head with the action relentless.

Frampton began to go back to what was working best, drawing Santa Cruz in and countering from the eighth but was also happy to go to war and his work was much cleaner with his counters, especially the left he couldn’t miss with all night, catching the eye.

Santa Cruz seemed to know he had to pull out something special in the ‘championship rounds’ and he enjoyed a big 11th that began with a massive right, but the sound of the bell was greeted by Frampton defiantly raising his glove to salute his fans.

However, he seemed to be rocked by a right early in the 12th, but certainly recovered as the final seconds saw both men throw everything at the other to cap a fight that will enter the annals of boxing folklore.

“The game plan was distance and control, but hit him hard and make him get my respect from the start,” said ‘The Jackal’ after.

“I think I hurt him in the second round and although he was throwing a lot of punches, he didn’t throw as much as normal and I said that. I said that once I nail him, the output isn’t going to be as great. Distance, control and hitting hard was the game plan, but I was able to fight when I had to.

“We spoke in the changing room before that if we had him rattled, not to get too excited and just keep doing what we are doing.

“I didn’t get overeager because Santa Cruz is a tough guy, so I wasn’t going to get silly and jump in. I just wanted to break him down, but he kept coming.”

The respect was there between both men before, during and after the fight. While Santa Cruz was devastated to lose his title and undefeated record, he was fulsome in his praise for Frampton but feels a rematch would go differently.

“It was a great fight. I said before it was going to be a tough fight because Carl Frampton is a great fighter and also a great person. I respect that,” said the three-weight champion who oozed class throughout the build-up and after.

“I think he had great footwork and movement like I said at the beginning.

“We had to look out for those power punches because he is a strong fighter and he got me with some good ones.

The Mexican certainly had his moments in the fight, but perhaps Frampton allowed him into the fight in the mid rounds and towards the end.

“You want to stamp your authority on it and I wasn’t going to let Leo Santa Cruz push me around,” he stressed.

“I got a few harsh words in the corner as I was making it difficult for myself at times, but I won’t do that again. I’ll listen a wee bit more.”

How he could even hear his corner’s instructions is remarkable given the incredible noise inside the arena. The new featherweight champion is a man who thrives off the big atmospheres however and said it was a special night, perhaps one that will take a while to register.

“The atmosphere and support has a big effect. I think it adds to my performance so when you have so many people making so much noise, I always think it’s going to drive me on a bit more,” he explained.

“I don’t know if it’s sunk in, but when I get back home it will hit me a bit more. It’s a huge achievement. I’m just a normal guy, working class who can fight a wee bit and that’s it.”

Carl Frampton can do more than just fight a wee bit. The man from Tigers Bay has brought unprecedented glory to his home city and on Saturday, gave all in attendance and those roaring him on from home a night they will never forget.