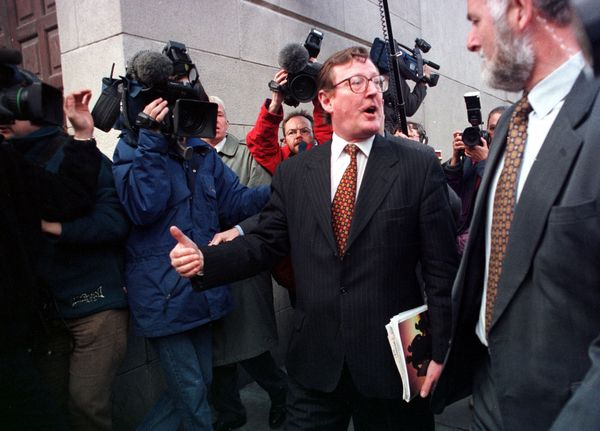 TOUGH TALKING: Flashback to April 1998 and David Trimble enters the Europa Hotel for a press conference carrying a copy of the Good Friday Agreement which his party has just endorsed. Rollingnews.ie

SO  what are we to make of the warnings by some unionist leaders over the Irish Protocol? Do we ignore them? I think not. Even though we have heard all this all our lives it is too serious to ignore. Operation Fear needs challenged.

Take for example Sammy Wilson’s statement. Mr Wilson said the “real danger is that frustration and anger will be challenged through violence against easily identified targets.”.

Mr Wilson needs to explain who these “easily identified targets” are.  If they are easily identified surely he can let the rest of us know who he means.  Maybe when he is at it he could also let us know who will be doing the challenging through violence he is predicting. If he has information about this has he alerted the PSNI?

Mr Wilson wasn’t alone. A former member of David Trimble’s negotiating team during the Good Friday Agreement talks, David Campbell, who is now the Chair of the Loyalist Communities Council, has claimed: “If it comes to the bit where we have to fight physically to maintain our freedoms within the UK, so be it.”  Again this begs questions. For example, who is the ‘we’ Mr Campbell is talking about?  Would he elaborate? And who will they fight physically against? The English Government? The European Union? The rest of us?

Campbell’s former boss David Trimble also expressed his belief that the Protocol has created “genuine grievances” among unionists and that “There is real potential for those who have engaged in past violence to take action again into their own hands.”

Again, Mr Trimble needs to explain who he means. Name names! Spell it out! If there is “real potential for those who have engaged in past violence to take action again” then we deserve to know who and what is involved. Mr Trimble needs to explain himself.
Mr Trimble also claims that the Protocol is a threat to the Good Friday Agreement. But during the debates in the British Parliament that led to Article 50 and which cleared the way for Brexit, unionists voted not to defend the Agreement. Four years ago this month – February 2017 – the record of the British Parliament states that the “DUP and UUP vote with Tories to defeat amendment 86 that requires that Article 50 does not break agreements in the Good Friday Agreement.”

USE OF ORANGE CARD

Warnings of violence by unionists to get their own way have been a regular feature of Irish political life going back to the nineteenth century. Sectarian pogroms, the use of the Orange Card by unionist and Tory politicians, discrimination in jobs and housing, the gerrymandering of elections, state collusion with death squads, have all been part and parcel of unionist strategy when faced with anything that could be construed as a threat to their domination.

As this column has noted before, Brexit is a child of the DUP. They were repeatedly warned that it would be bad for the north and bad for the economy. When the Department of the Economy published a report in July 2019 warning of 40,000 possible job losses as a result of Brexit, DUP MP Jeffrey Donaldson said he could live with that. It would, he claimed, have a short-term impact on the north’s economy, but that this could be mitigated. Other DUP spokespersons were equally strident. Who can forget Nelson McCausland’s: “I wouldn't care what sort of situation I face as long as I'm out of Europe.”? While wrapping themselves in the cloak of democracy the DUP ignored the democratic vote of the people of the north to stay in the EU. When the previous British Prime Minister, Theresa May, produced proposals to avoid an Irish Sea border they voted No.

It is important that we are attentive to this mindset within political unionism. But we should not acquiesce to it.  Unionism is no longer the monolith it once was. Its electoral majority in the Assembly and at Westminster is gone.

Dialogue and a common sense approach to the constitutional status of the north is a part of the way forward. But if history – and especially the role of unionism in our history – teaches us anything it is that dialogue works. Scaremongering doesn’t. Unionists have the ability to bring an end to their serial betrayals by their leaders in London.

Mr Trimble describes himself as someone who loves his country. I have no doubt that this is the case. I also presume that his country is my country also. Or part of it. It’s time for unionists to decide that we don't need leaders from another country to rule us. As James Connolly said once: “Ruling by fooling is a great British art. With great Irish fools to practice on.” Let unionists Say No to any more betrayals.

Mr Trimble also takes umbrage because, as he puts it, he persuaded unionists to support the Good Friday Agreement on the “commitment that they would have the final say over any change in the status of Northern Ireland”. He claims the Irish and British governments have broken that promise. “...the Northern Ireland Protocol willfully tears it up. Not only do I personally feel betrayed, but the majority unionist population of Northern Ireland feel betrayed also.” No mention of the majority who voted against Brexit. But maybe that’s because Mr Trimble clings to the old notion that only his ‘majority unionist population’ counts?  He should know that the days of ‘the unionist majority’ having a veto are over. He supported that when he correctly supported the Good Friday Agreement.

Since the foundation of the northern state in 1921 until the Good Friday Agreement there was a unionist veto. It was often referred to as the ‘consent principle’ but it was only unionist consent that was involved. This was a negative mechanism that encouraged unionist intransigence and a lack of engagement with the rest of us.

When a majority consensus for reunification emerges within the north, the British government is committed and obliged to abide by the “wish expressed by a majority”. Then the north of Ireland will “cease to be part of the United Kingdom and form part of a united Ireland”. Mr. Trimble should know this – he negotiated it in the Good Friday Agreement.

Mr Trimble should also know that the repeal of the Government of Ireland Act as part of the Good Friday Agreement ended the absolutist British territorial claim. And the unionist veto. There is now no absolute commitment, no raft of parliamentary acts, to back up an absolute claim. Now there is only a commitment to stay until a majority decides otherwise.  Unionists will have their say, quite rightly. But on exactly the same basis as the rest of us.

Irish republicans and democrats believe that the people of the island of Ireland have the right to self-governance. The Good Friday Agreement introduced mechanisms to achieve this if that’s what the people decide. Among these is the unity referendum. Mr Trimble and his colleagues, rightly, support that also. 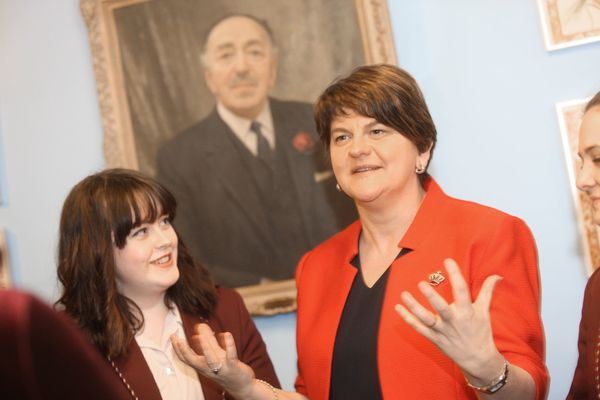 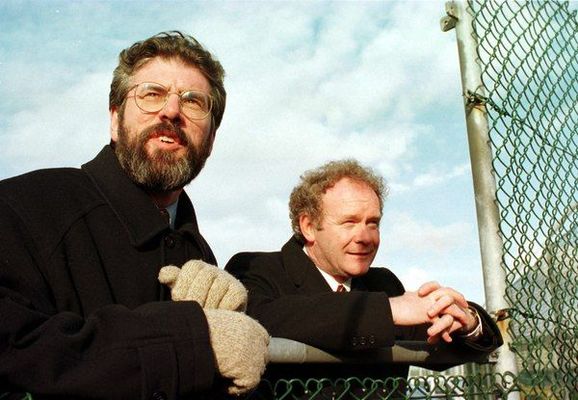 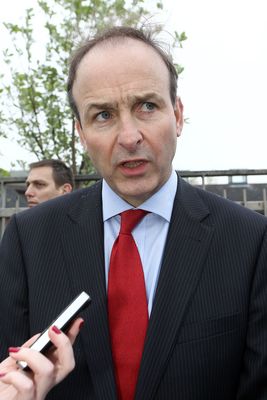