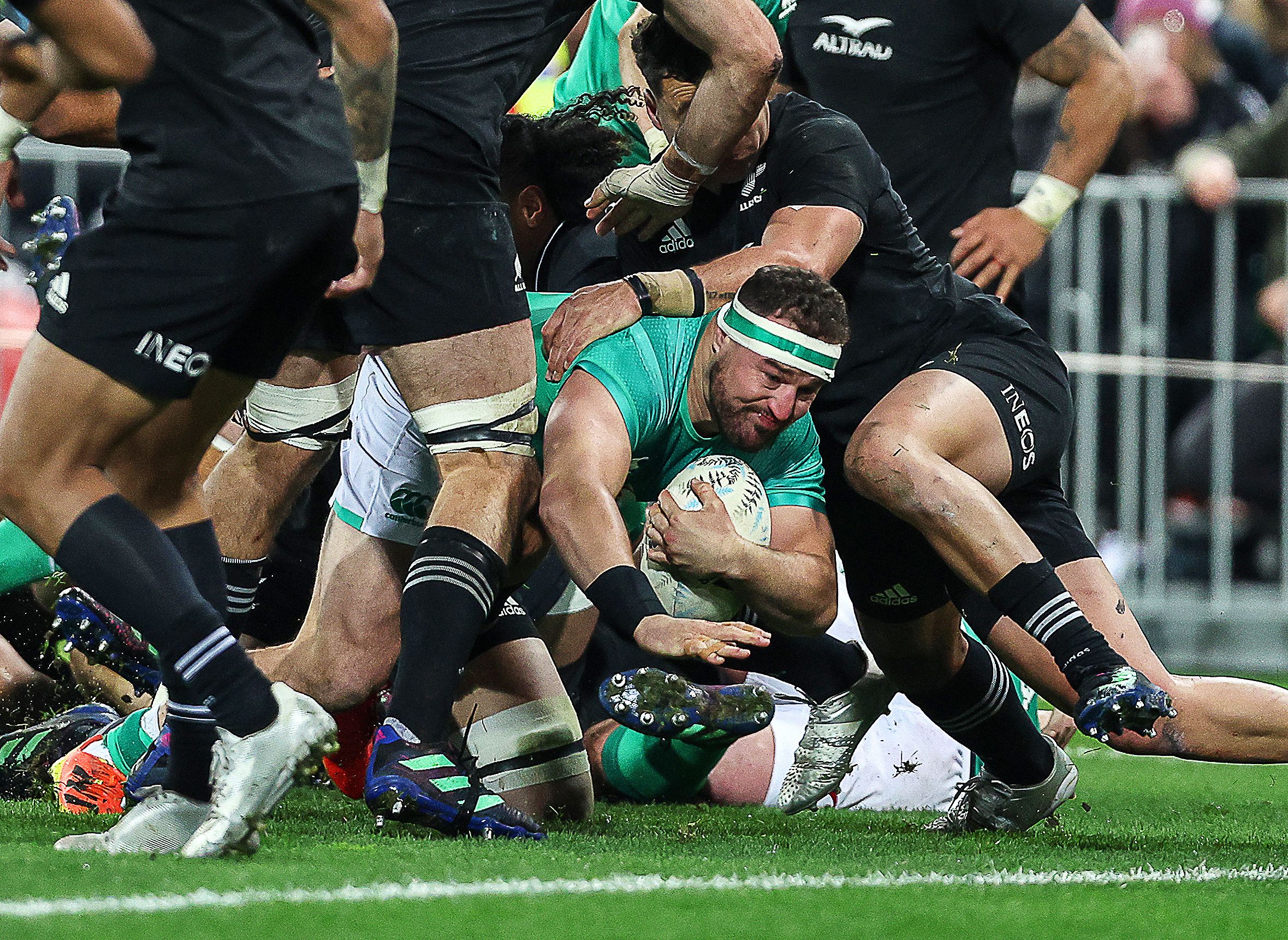 Rob Herring, pictured scoring a vital try in Ireland's win over New Zealand this summer, will make his first start for Ulster this season INPHO

ULSTER will be aiming to make it two wins from two in the BKT united Rugby Championship tomorrow (Saturday) when they face Scarlets at Parc y Scarlets on at 1pm (live on Premier Sports).

Last weekend, they got the new season off to a winning start with a home victory over Connacht and have been bolstered ahead of tomorrow's game in Wales with the return of the Irish international contingent.

With the Ireland internationals, involved in the historic series-winning tour of New Zealand over the summer, making a return to the Ulster jersey, they will be looking to make a statement when they travel to face former Ulster Attack Coach Dwayne Peel’s side who drew their opening fixtures against the Ospreys last week.

Making his return from scoring a match-defining try in the final Test against New Zealand, Rob Herring will take his place in the front row this week alongside Andy Warwick, with 157 Ulster caps to his name, and tighthead prop, Marty Moore, who Head Coach, Dan McFarland, described as “one of the top scrummagers around in Ireland” in last week’s post-match media.

Joining captain, Alan O’Connor, in the engine room is Kieran Treadwell, who will be looking to bring what he’s learnt in the green jersey onto the pitch in this year’s BKT URC season.

Brothers, Matty Rea and Marcus Rea, retain their starting spots in the back row, and will this week play alongside returning, Nick Timoney, who has impressed on an international stage since scoring a try against the USA in his Ireland debut last summer.

Ulster Rugby Academy graduate, Aaron Sexton, will make his first start for the province, as Michael Lowry is in action again at full-back, alongside Jacob Stockdale in the back three.

Stuart McCloskey and Luke Marshall, who combined so impressively for the first try last weekend, are retained in midfield.

Completing the starting XV for this week are the familiar pairing of John Cooney and Billy Burns at scrum-half and fly-half respectively.

Back-row Sean Reffell, who joined during the summer, is set to earn his first Ulster cap off the bench. Declan Moore, Eric O’Sullivan, Sam Carter and returning Tom O’Toole complete the forward cover, while backs Dave Shanahan, Angus Curtis and Craig Gilroy are also included in the replacements.

📢 Here's your Scarlets 23 to take on @UlsterRugby on Saturday (1pm)

“Scarlets is going to be a different game this week in many ways," said Ulster’s new Defence Coach, Jonny Bell.

"They are a team that like to play a bit of rugby and, with Dwayne Peel knowing the Ulster squad inside and out, I have no doubt that he’ll have something up his sleeve.

“We need to be on our mettle against a very good side, and it’s going to be a challenge for us defensively, but that’s what we want.”