US delegation set for North for Protocol talks 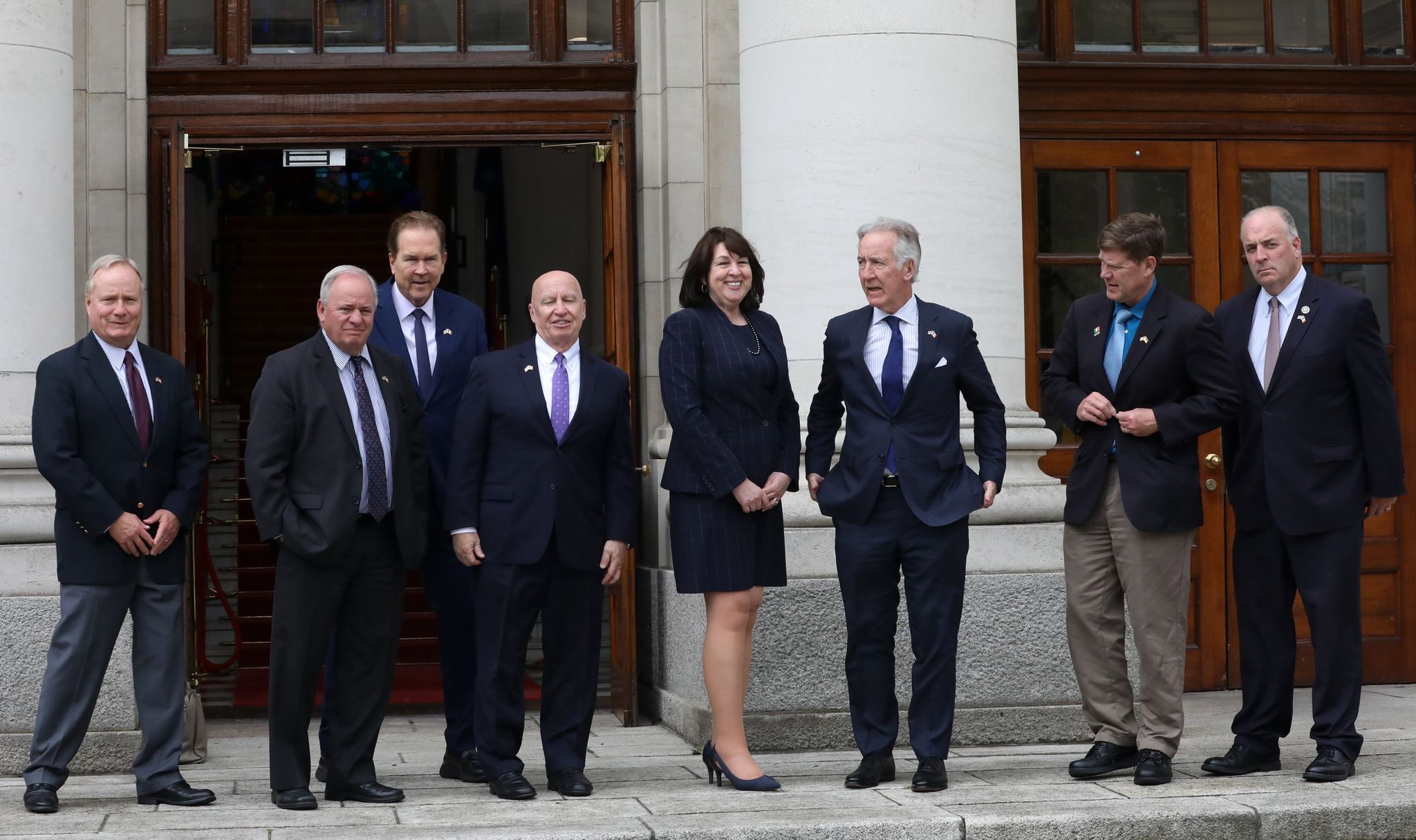 VISIT: Senator Richie Neal, third right, leads the delegation from the US on their visit to Ireland

A BI-PARTISAN delegation from the United States are continuing their visit to Ireland after meeting President Michael D Higgins this morning.

Yesterday, the delegation which is headed by the chairman of the powerful Ways and Means Committee, Senator Richie Neal, met with the Taoiseach Micheál Martin and Sinn Féin President Mary Lou McDonald.

Ms McDonald has travelled to London today with First Minister-elect Michelle O'Neill to hold discussions with the British Government around the political deadlock affecting the re-establishment of the North's Assembly.

Speaking after her meeting with Senator Neal, Mary Lou McDonald said: “I thanked the members of the US Congress for their continued support of the Good Friday Agreement, for peace and for progress in Ireland.

“There would be no Agreement without the US. The progress we have made since 1998 has been due to the diligence and commitment of US political leaders who have acted as guarantors of our agreements."

Ms McDonald added that these agreements face challenges from a British government that "plays fast and loose with international law" and "places narrow Tory party concerns above the needs of the people and economy of the north."

“We all agree the way forward is clear – the DUP need to get back to work and stop blocking the formation of an Executive," she continued. “The British government must abide by international law.

“The resolution to the implementation of the Protocol will be found in negotiations between the EU and British government free from threats of unilateral action.”

'How long before we have a united Ireland?' - @richardm56

Leader of Sinn Féin @MaryLouMcDonald tells Richard and @susannareid100 that she believes there will be 'referendums on unity in this decade.'

She adds that we need to look at this as a 'democratic opportunity.' pic.twitter.com/qikATyhgw5

Meanwhile, Senator Neal and the delegation are due to travel to the North of Ireland on Wednesday before holding meetings with party leaders on Thursday.

Ahead of this, UUP Leader Doug Beattie MLA said that he will make clear to Senator Neal that the Protocol does not have the consent of the unionist community.

"Much has been said about the need to protect the 1998 Agreement, at times by those who gave the changes made at St Andrews scant regard," he said. "One of the fundamental principles of that agreement is that change requires the consent of the people and the Northern Ireland Protocol does not have the consent of the unionist community.

"The history of Northern Ireland shows that treaties which do not have the support of all communities will simply not work. Look no further than the Anglo-Irish Agreement of 1985. Like the current Protocol, it was imposed on the people of Northern Ireland, who rejected it in huge numbers and it was replaced with the Belfast Agreement. The Protocol will face the same fate.

Doug Beattie said that Americans should understand the consent principle very well from their own past.

"They broke from British rule in 1776 on the slogan ‘no taxation without representation’ which outlined a simple yet important democratic deficit," he continued.

"The people of Northern Ireland did not have a voice in the design of the Protocol. If they had, I am confident checks on goods moving to Northern Ireland from Great Britain as a final destination would never have been included in any trade deal with the EU. The democratic deficit would have been dealt with and the principle of consent upheld, ensuring the Belfast Agreement was not damaged.

“I shall be making this point to the Congressman on Thursday in a constructive manner and trust he will agree that the consent principle must apply equally to all communities if we are truly to honour the spirit of the Belfast/Good Friday Agreement.”