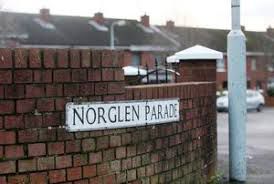 Fledgling proposals to transform an antisocial hotspot in Turf Lodge could see the development of some much-needed social homes.

Community and political representatives met with Housing Executive officials at Norglen Parade on Friday to discuss the redevelopment of adjacent green space, which has regularly been used as a dumping ground for stolen cars.

It comes following a long campaign to tackle car crime and antisocial behaviour in the area.  Phase one of the development saw the narrowing of the road at Norglen Parade to inhibit death driving.  The latest proposals, which are subject to a full community consultation, include early plans to build social homes. Sinn Féin Councillor Michael Donnelly, who took part in Friday’s site visit, said that while proposals were a “positive” step but stressed the need for the input of residents.

“On the back of a door-to-door consultation through the Upper Springfield/Whiterock Integrated Partnership, the issue of antisocial behaviour on Norglen Parade came up on the doorstep,” he explained.

“It has been an antisocial hotspot now for well over a decade of death driving and car crime. The first phase was the narrowing of the road. It was a very wide road that was used for death driving. There would have been all sorts of issues and then the cars would’ve been abandoned and set on fire, making life a living hell for residents in Norglen Parade and the houses that back onto it on Monagh Drive.

Working alongside the Department for Infrastruce in consultation with the residents we narrowed the road, which worked to an extent, however, antisocial elements still use that green area to abandon vehicles. Last Christmast there were four cars burnt on that area, so we need to look at that area in its entirety.

“Before lockdown we had a conversation with the Housing Executive about the piece of green land to see if they could do something with it, whether that’s enhancements or looking at potentially putting some form of housing on that site.”


Cllr Donnelly said there will now be a door-to-door consultation to discuss options for the site.

“We’re exploring it and the Executive are up for doing something with it, and we’ve spoken to a number of interested housing associations who would be willing to develop that land, all subject to a consultation process with local residents,” he stressed. It is one of that last remaining green open spaces in the area so it’s about looking at enhancing the area through housing, but also enhancing the green area by planting more trees, wildflower meadows – all that sort of stuff. We will be doing a door-to-door consultation in the coming weeks and put a few options to the residents: would they like to leave it as it is? Would they like to see some form of social housing on the site? Or just to take their thoughts on board to see that they like on it.”