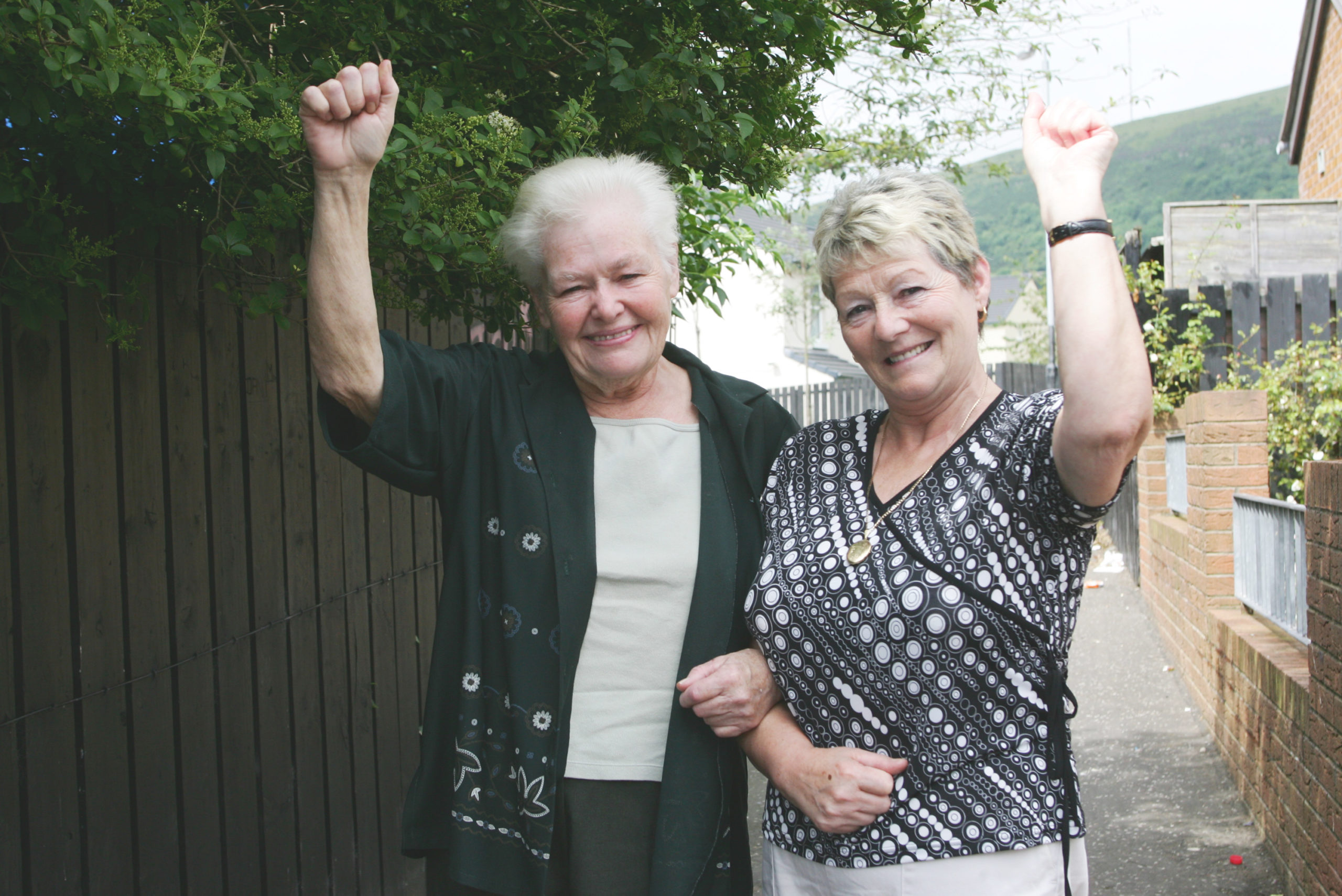 COMRADES: Friends Lily Fitzsimons (right) and the late Marie Moore drew inspiration from each other

TRIBUTES have been paid following the death of republican stalwart and community legend Lily Fitzsimons.
Born in North Belfast in 1937, she later moved to Turf Lodge where she served as a dedicated and lifelong community activist.
Lily was among the women who broke the British Army’s Falls Curfew in 1970 and she became actively involved in the Green Cross after the introduction of internment.
She was a tireless campaigner in the Relatives Action Committee and the National H-Block/Armagh Political Prisoners campaign.
Lily was twice elected (1985 and 1989) as a Sinn Féin councillor to Belfast City Council before stepping down in 1993.
After her passing on Saturday, former Sinn Féin President Gerry Adams described her as a “a proud united Irelander”.
“Lily’s politics were shaped by her family, her community, her class, her gender and her life experience,” he said.
“She was inspired by Máire Drumm and Marie Moore and the hundreds of women who daily challenged the actions of the RUC and British Army. In July 1970 she was one of thousands of women, led by Máire and Marie, who broke the British Army’s curfew of the Falls.
“She was a strong, immensely able woman. She was a key activist in the political status campaign in the 1970s and during the subsequent hunger strikes when her son Sean was on the blanket protest.
“Lily, along with many other Turf Lodge mothers, sisters and wives, took to the streets to highlight the conditions under which republican POWs were being held. She travelled widely to Britain and the USA to highlight the appalling conditions in the H-Blocks and Armagh Women’s Prison.
“The Relatives Action Committees took over buildings and blocked streets and when the British Army and RUC were sent in to beat them off the streets, the women faced them down.”
He continued: “In 1985 Lily was elected for the Upper Falls as a Belfast City Councillor along with Alex Maskey, Sean McKnight, Bobby Lavery, Sean Keenan, Gerard McGuigan and Tish Holland.
“It sparked a vicious campaign by unionist councillors to deny Sinn Féin representatives any real say in the running of the Council. Lily and her six comrades ran a daily gauntlet of physical and verbal threats and abuse. They were denied speaking rights in the Chamber. They were shouted down. Deodorant and other sprays were used against them.
but they never backed down. They fought their corner and represented those who elected them. Today Belfast City Hall is a different place because of the resilience of Lily, Tish and their comrades.
“Lily was hugely respected and loved. She stood strong in defence of her community at a time when Sinn Fein councillors and activists and families were being attacked by unionist death squads. Three Sinn Féin councillors and 14 party activists were killed during the time she was a councillor. Family members were also killed when homes were attacked.
“Lily loved Turf Lodge and the people of West Belfast. She believed passionately in the rights of citizens and she brought that passion to all of her work.
“She was an unapologetic united Irelander. A woman of compassion – who believed in equality and in citizens’ rights.
“Lily was also a wife, a mother, a grandmother. She was a writer who wrote insightfully of the role of women in the struggle. And she was a great singer whose party piece was Crazy by Patsy Cline.
“I want to extend my condolences to Sean, Bobby, Margo, Gerard and the wider family circle.”
West Belfast MP Paul Maskey described her as a “great stalwart”.
“So sad to hear the sad news that former Belfast Sinn Féin councillor, Turf Lodge icon and brilliant person Lily Fitzsimons has died,” he said.
Paying his respects, Sinn Féin Councillor Michael Donnelly described the news of Lily’s passing as “devastating”.
“I was honoured and privileged to have had Lily sign my nomination papers last year as a councillor going forward,” he said.
Cllr Donnelly paid tribute to her years of dedication to the “republican struggle”.
He added: “Her death is a terrible loss to her family and the wider republican family. “My thoughts are with the Fitzsimons clan at this sad time.”
In a statement, Belfast National Graves Assocation extended “condolences to her family and friends”.