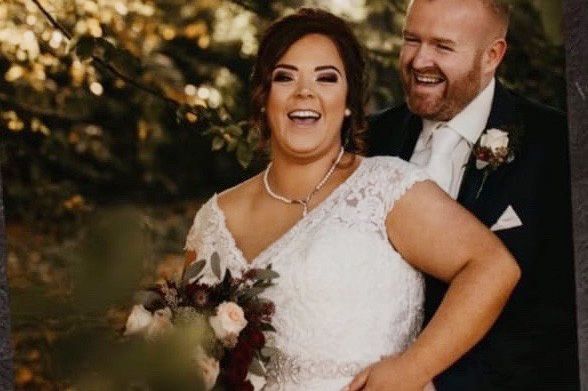 THE West Belfast community is being asked to rally around the family of 31-year-old Paul Dornan who continues his fight against leukaemia.

From Rossnareen Avenue, Paul celebrated his wedding day to wife Katie back in October but just five months later was given the shattering diagnosis that he had leukaemia.

As Covid-19 lockdown took hold across Ireland back in March, Paul began to feel unwell and on his GP’s advice was told to self-isolate at home. Despite this his condition worsened and he was sent to Beech Hall in Andersonstown where he collapsed through the doors upon arrival and was immediately blue-lighted to the Royal Victoria Hospital. It was here that Paul was told he had leukaemia.

School friends since their St Oliver Plunkett Primary School days, Kieran McCormick explained how he and others have set up a GoFundMe page to support the young family in the difficult time ahead as Paul learned three weeks after his diagnosis, while in the City Hospital’s Cancer Centre, that he is to become a dad in December. Kieran described his friend as a “very quick-witted guy, someone who loves a good sleg and banter”.

“Paul has the memory of an elephant, there are things that he can remember from when we were kids that is unbelievable,” said Kieran. “He has such a positive and upbeat outlook on life despite the card he has been dealt. I can’t say I’d be the same if I was in his shoes.

“Paul has been a friend for about 25 years. Me, my brother and Paul’s cousin have all got together to try and help him and his family.”

Kieran spoke of how Paul has had to face his diagnosis and the fall-out from it alone.

“He’s been in hospital 24-7, from being blue-lighted, to his diagnosis to receiving chemo in the City Hospital’s Cancer Centre.

“From the day he left his house to go to Beech Hall he had to process, digest this news, all on his own. He couldn’t see his parents, his wife, friends because of the Covid restrictions,” he said.

He continued: “Paul and Katie were only married in October, the first year of marriage is meant to be the best year, it’s been far from it. Katie phoned Paul to tell him she was pregnant with their first child, a baby girl.

“Normally this would be wonderful news for a newly married couple. Katie is now quite far on in her pregnancy with the baby due in December. Katie is facing the reality that Paul will not be at the birth due to being high risk and the risk of infection.”

Kieran spoke of the mounting pressure on the family.

“It’s been a cocktail of disaster emotionally and financially,” he said. “We decided we would try and help the family by setting up this page for them. Paul and Katie are both so well thought of and we are hoping that the local community will get behind us and support the family and lessen the financial burden and let them focus on Paul’s treatment and recovery.

“We want to help him and Katie who has been working and looking after her daughter Mia, from a previous relationship whom Paul just dotes on. We launched the page on Saturday and the support of people, and their generosity has been nothing short of brilliant. People are worrying about their own jobs and situation, but they have been amazing.

“Both Paul and Katie are just overwhelmed with how good the people of West Belfast are. We are blown away.

“We do have a few more fundraising events planned, Covid restrictions permitting, but we are hoping to have the hall in the Donegal Celtic and organising a 5K run with a local gym.

“Paul is really one of life’s gentlemen, he is very strong willed and determined, he’s our friend and we will do whatever we can to help him and his family.”