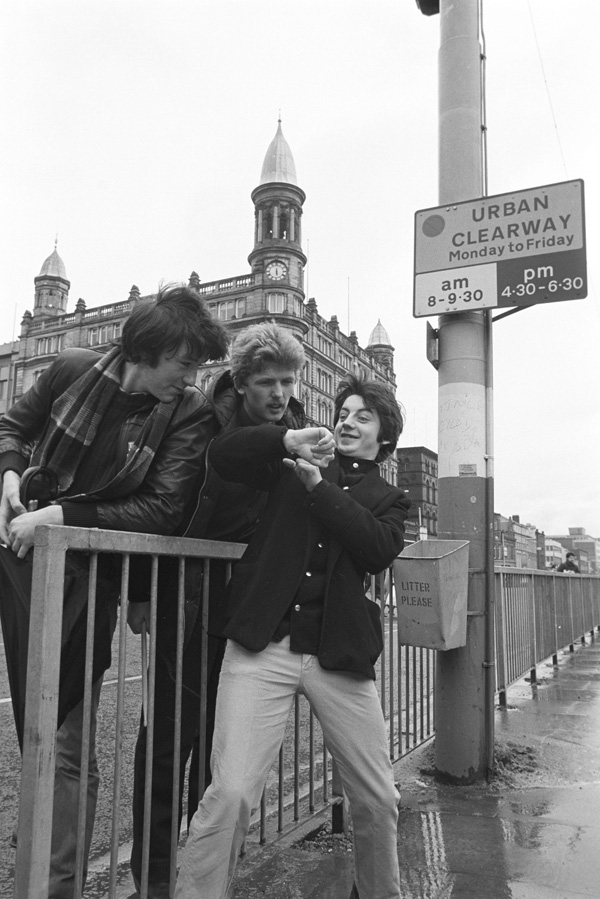 BELFAST is in mourning after the passing of one of its most beloved sons.

Singer songwriter Bap Kennedy passed away on Tuesday evening after a courageous battle with pancreatic cancer. He was 54 and is survived by his wife Brenda.

Beechmount man Bap shot to fame locally with his band Ten Past Seven which he formed in the early eighties as post-punk West Belfast found its musical voice. The Bank Robbers were another West Belfast band from the time. Their former drummer Seamie O’Neill recalls those early years on the music scene.

“I first met Bap way back in 1980 when he formed a local band with some of his friends Bradso, Brezzie and Spade called Ten Past Seven. I was in a band called The Bank Robbers with my friend Joby Fox and we were beginning to make a little bit of noise on the local scene, so whenever we would do a gig Bap and the lads would support us.

“From those early days it was very evident that there was something really special about Bap, like his song-writing. I vividly remember him writing two songs ‘Flowers for Julie’ a song about young Julie Livingstone who was murdered by a British army plastic bullet and ‘Shine on Christmas Star’ recorded with local school children for charity. They were amazing songs, both written with compassion and love and I am thinking to myself where are these lyrics and melodies coming from?”

Seamie added: “Like most bands back then we all moved to London to try and make it in the big bad world of music. I didn't last, but Bap and Joby did. I had returned to Belfast and set up a promotions company and one day I received a phone call from Joby to tell me that he and Bap were now in a band called Energy Orchard and that he had just posted me a demo tape to listen to. I thought to myself, now that's a brill name for a band so here's hoping the songs are great, and they were!

“What a band and what a debut album simply titled 'Energy Orchard’. I was commissioned by their London management to, as they say, work the album and promote it to its full capacity which I did with both the album and first single ‘Belfast’ going to number one in Ireland.

“An Irish tour was swiftly arranged by myself and one of thee best gigs on that tour was a gig at one of the first ever West Belfast Festivals in an old Marquee in front of the PD. The gig, which was negotiated by Hector and Teapot who had gate-crashed our dressing room at The Mandela Hall several months earlier, which quite simply was a laugh and a half. With all the dots crossed the band did a cracking gig for their local people. They had returned home.”

“Always a fan of his song-writing, I watched his career hit highs and lows but I feel it wasn't until he met his manager Willie Richardson an ex-head of Virgin Records that he got back on track,” said Seamie. “Putting a band together with his wife Brenda on bass, his profile and music were beginning to shine through again. He was finally beginning to find his way again.

“Willie was doing a great job looking after him but because of illness he stepped aside.”

Seamie says last year he received a call from Bap asking to meet up for a chat, which they did.

“He was looking someone to promote him and I said it would be a pleasure. So with the great groundwork that Willie had already done we booked our first collaboration together and put on a show at the 174 Trust last December, and it sold out. Two hundred people came to see Bap perform. He was amazed, as was Brenda.

“Another gig was put on for 'Bap Kennedy's Sunday Hang Over Brunch’ on St Valentine’s afternoon in February, that too was a complete sell-out.

“The following week I called him and told him I had a plan. He laughed and said ‘So we've got a plan, Seamie’, I told him and Brenda give it eighteen months and we will fill The Opera House. There was silence at the end of the phone and then he said 'sounds good to me’. I told him we will do one more Sunday afternoon show at The Belfast City Blues Festival, then we will put our big plan into action. Sadly it didn't happen.”

On the first Sunday in May a few days before the official launch of the Blues Festival Seamie received a text from Bap’s wife Brenda asking if he could take a call from Bap.

Seamie said: “He said he was sorry for letting me down but that he would be out of action for a while and not be able to do the festival. He told me he had cancer. He thanked me for everything I had done for him. I told him not to worry about the festival at all, and to just get well as he had an Opera House to fill.

“It was a very sad moment but one that I will never forget. Shorty after Bap was diagnosed terminally ill.”

Seamie said Bap Kennedy was one of the finest singer, songwriters Ireland has ever produced.

“He was his own man and along with his beautiful wife Brenda, was back doing once again what he did best, making people happy with the great music that he made. He had recorded with the greats, Steve Earle, Van Morrison, Shane Magowan, Mark Knoffler.

“Now he is up there with the greats. To Brenda, his mum, dad and family circle, sincere condolences. Bap, you will be sadly missed.”

Joby Fox, who was in Energy Orchard with Bap, also paid tribute to his close personal friend.

“Bap was a talented man. I’ve known him since we were kids in Riverdale,” he said. “We had dreams and we made them come true. We toured the world together.

“We had our ups and downs together but we stayed close our whole lives. Bap was a believer and was a very fun character.

“West Belfast should be very proud of him. He was a shining light for Belfast in general. His work will stand for a long time – he was the genuine article as a music artist.

“We took on the world together and for a moment we had it in our hands. I’ll miss him but I’ll see him again. He will be sadly missed and my thoughts are with his family,” he added.