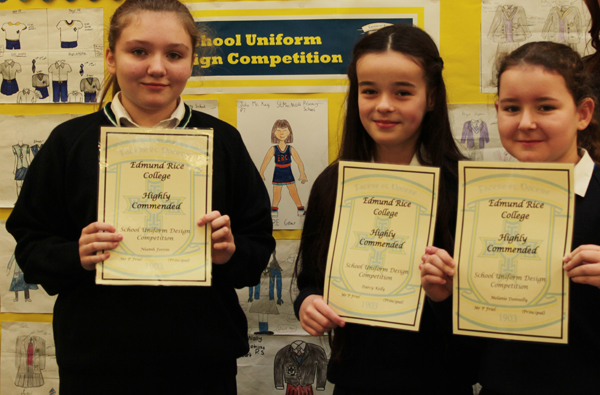 GLENGORMLEY'S Edmund Rice College has started laying the groundwork for accepting girls next year with the winners of a ‘Design a Uniform’ competition announced.

The school held the competition for local primary schools to allow girls to design how they thought their new uniform should look.

Edmund Rice College will become co-educational from next September in the same shake-up that will see Little Flower and St Patrick’s Bearnageeha merge.

Primary six and seven pupils from Glengormley were invited to enter the uniform competition and the winners were announced at a special breakfast in the school on Friday (November 18).

Principal Peter Friel said both staff and pupils were looking forward to the transformation.

“It is an exciting time for the school and local community when for 40 years only boys have been able to avail of the outstanding teaching in Edmund Rice College,” he said. “Now the school will be open to girls also there has been much discussion over what form a girls’ uniform should take and it will be exciting to see this come alive in September 2017.

“A school to cater for both sexes and all abilities is something to celebrate and is to be greatly welcomed in Glengormley and North Belfast.”