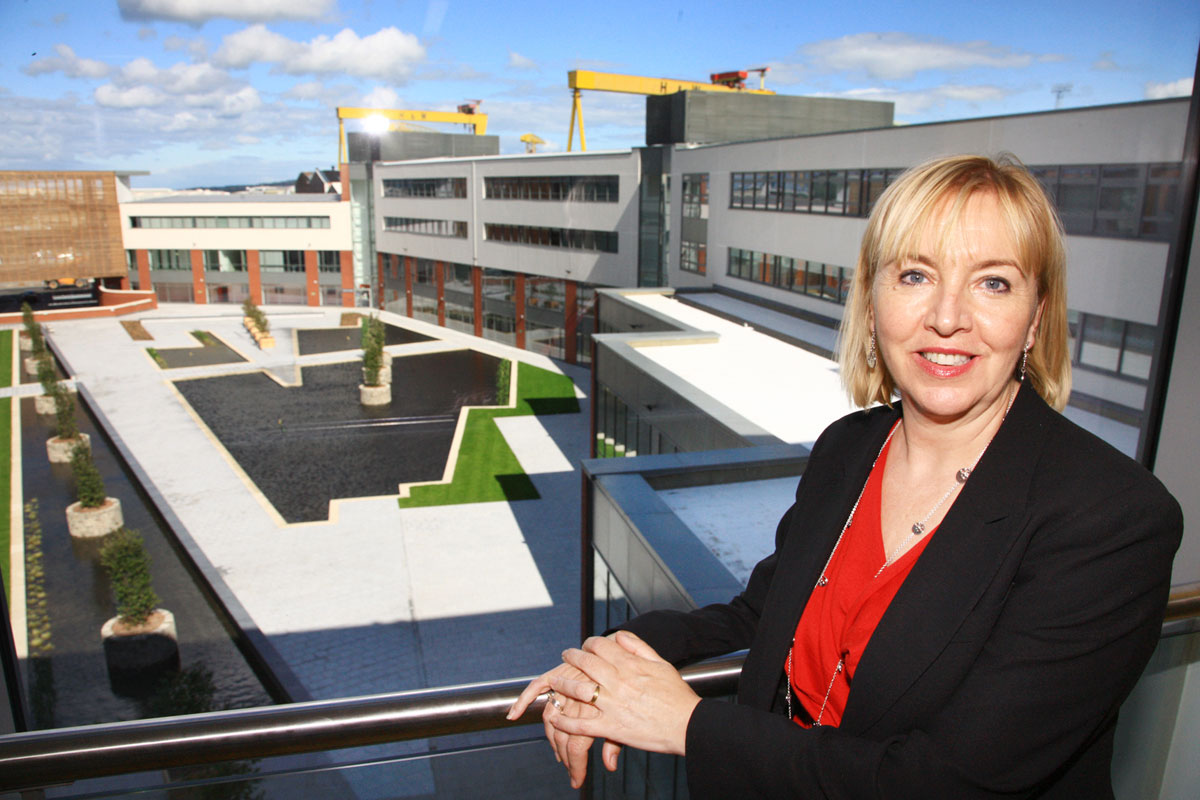 Over three-and-a-half years in the making, the 21,000 square metre, four-storey complex, which replaces the up-for-sale city centre College Square East campus and the Brunswick Street building, is perhaps the most state-of-the-art further education facility on the island of Ireland and will be home to 12,000 full- and part-time students from across Belfast and beyond.

The T3 project has come in on-budget and on-time, quite a feat for a development of this size, says BMC’s Director and Chief Executive, Marie-Thérèse McGivern.

Despite the impressiveness of the new campus, which sits directly across from the Titanic Signature Project building, the realisation of T3 has not come without controversy.

When the first sod was cut on the site in 2009, BMC was in the midst of a severe financial deficit chalked up over several years, something that Ms McGivern had to immediately address when she took on the role of Director and Chief Executive in November 2009.

“There were a lot of problems and we had to come in, look at the whole organisation root-and-branch and really radically re-engineer it. Unfortunately, part of that process which we have gone through over the past 20 months was a big redundancy programme. We will, at the end of that, have lost nearly 120 staff, all of whom have left or will be leaving on a voluntarily basis, I’m glad to say.  From downsizing the staff and radically re-thinking our finances we’ve moved very strongly forward.  We’re not completely out of the woods yet, but it’s a very positive picture for the future.”

The radical re-think of finances and staffing came about as a result of a document called the College Improvement Plan (CIP).  Drawn up by the consultancy firm Deloitte. The plan outlined a dramatic BMC restructuring drive to claw back a projected financial deficit of over £6million.  In emails shown to the Belfast Media Group at the height of the job cutbacks controversy in the latter part of 2010, BMC union heads called the document “unacceptable” and “unrealistic”.

“It (CIP) hasn’t caused the destabilisation that apparently it was supposed to have caused and I think we’re over the worst part of it,” said Ms McGivern.

“At no time did management think this was an easy solution as this affected people’s lives, but I can understand and have huge empathy for the comments that were made. But the reality of it was we needed to save the organisation and in order to do that we needed to take some very, very difficult decisions and live with the consequences and I am pleased to say that we have moved through that dark period and we are moving on very strongly. In terms of our deficit, we will probably run a deficit for another year, but we are now projecting that we will at least break even the year after and then go into a surplus.”

With the college in such severe financial difficulty that it required a large amount of staff redundancies to rectify it, why push ahead with the £44million T3 project?

“Firstly, the decision on T3 was taken before I was here, or any of the present people were here,” explained Ms McGivern.

“Much earlier in the 2000s, there was a definite view that there required a huge amount of investment in the Victorian College Square East building. With disability legislation and any number of other health and safety issues, plus the general need for an education establishment in relation to facilitating subjects like digital media, a huge amount of investment would have had to take place in that building alone. Secondly, the Brunswick building, which was built in the late 60s/early 70s, was showing its age and required major refurbishment.  On that basis the options were either to refurbish them both, knock down one and rebuild there, or, alternatively, build a new campus somewhere else. In the process that went forward T3 was the selected project.”

BMC also came in for criticism regarding the location of the new multi-million campus which is located away from the neutral and central location of Belfast city centre in favour of what many see as an out-of-the-way site in the east of the city, forcing students from other areas to trek across town to attend classes. It’s a criticism Ms McGivern refutes.

“We are a kind of pioneer at the moment when it comes to the Titanic Quarter,” she said.

“When the Odyssey was built people did come to the Odyssey. We’re here now, PRONI (Public Record Office Northern Ireland) is right next to us and when the Titanic Signature Project opens next year you will begin to see the Titanic Quarter take on a lot more life. There will be a lot more buzz and people will travel from all over the city, so I think at the minute, because there’s not so much here, people tend to see it as an East Belfast thing, but I think it’s redefining what we see as the centre of Belfast. Sometimes I think people have an image of the Titanic Quarter as being 20 miles outside the city centre. We timed how long it takes to walk from the front of the Millfield campus to the front door here and it takes, depending on how fast you walk, between 15 and 20 minutes.

Ms McGivern added that BMC’s ambition is to become “a centre of excellence in Northern Ireland”.

“We want every student that comes in here to know that they are getting the best education, that their life chances will be enhanced by coming here,” she said.

“I think this [the opening of the T3 campus] is a real turning point for education in the city.”