A double goodbye to Mercy Primary 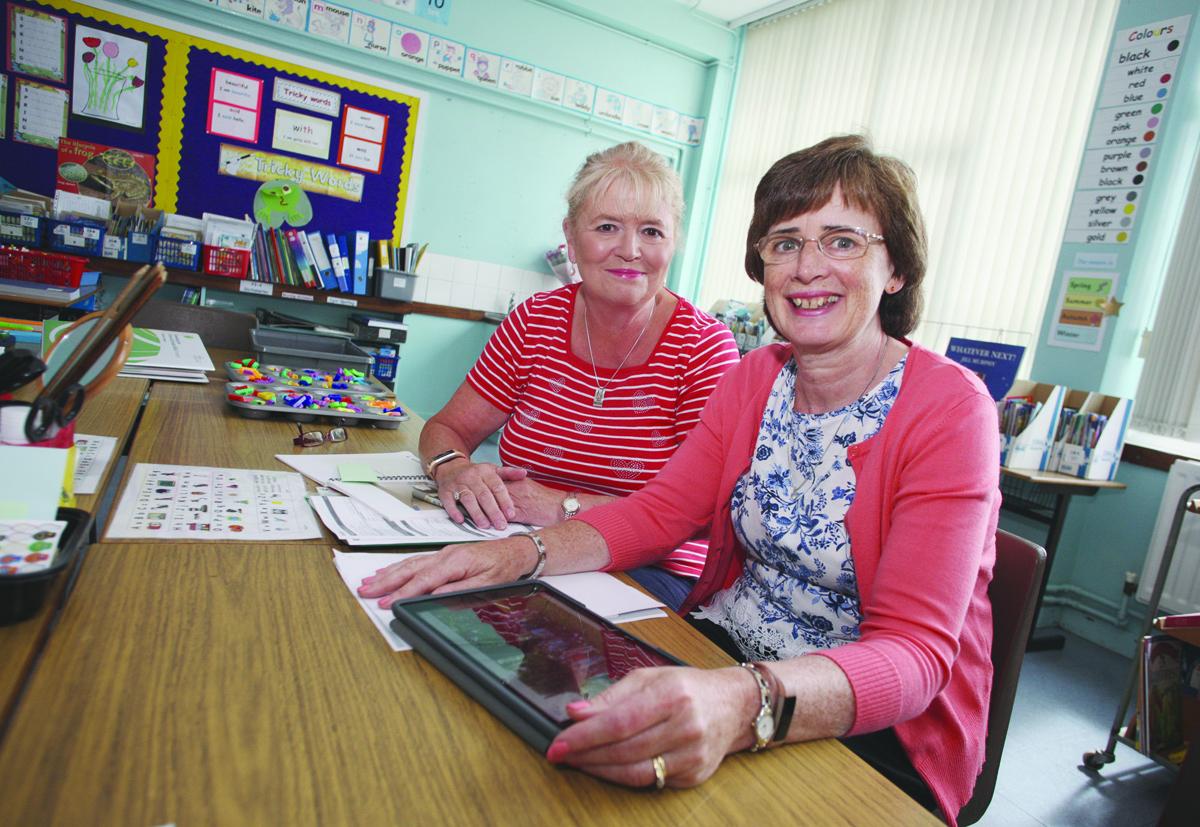 THE end of the school year marks the end of an era at Mercy Primary as two teachers with 55 years of service to the school take their retirement.
Catherine Cush has served the school for 31 years, while her colleague Stella Hunt has taught there for 24 years.
They have educated multiple generations of the North Belfast community over the decades, in some cases have taught both mothers and daughters, and many have fond memories of Mrs Cush and Mrs Hunt.
As the North Belfast News caught up with the pair to reflect on their careers this week, we learned that their association with the school stretches back much further than their time as teachers.
“My mother and her family came to the convent school when it was down near the Mater Hospital,” Stella explained. “I’m a past pupil, my three daughters came to the school. So we both have a lifetime association with this school. We’ve taught mothers and daughters. It’s very much a community.”
Catherine added: “I’m a past pupil, my sisters went through the school, my daughter came to the school and we were all very happy here.”
Interestingly, the pair both completed their teacher training at St Mary’s University College, further adding to their commonality. They were also led to their vocation by a shared passion for teaching.
“I always liked working with children,” Catherine said.
“It’s nice working with people you get a response from. When you get a new class at the start of the year and you’re with them for a year or two, then you can really see a huge difference at the end of that time.”
Stella added: “I like working with children, and I like to help people. All my life I either wanted to be a nurse or a teacher, so it was something I always wanted to do.
“We pride ourselves on giving support to whole families. We know a lot of the mothers, and grandmothers, and we’ve taught some of the mothers too, so that long association makes it a community. We think of it as a family.”
Stella and Catherine are in agreement that teaching is an extremely fulfilling job and they are delighted to have contributed to the school’s successes over the years. However, we were curious to find out what their proudest achievements were during their tenure.
Catherine said: “When I was teaching in secondary school, maths was my subject, and it was quite an unpopular subject.
“When I moved back to primary school, I hoped that I would make maths a more enjoyable subject, so that children didn’t move on with a fear of maths. I can’t tell you how successful I have been, but I’ve really loved teaching maths, and I hope I’ve made a difference in that regard.”
Stella, on the other hand, having returned to teaching after a maternal career gap, said: “On a personal level, I would say that I’m very proud of doing a Masters Degree while I was here. I’m proud of that because I started it when I was 40, and I felt that I was setting an example– that you’re never too old to learn. I’m the special needs coordinator, so I would have taught special needs groups most of the time. I have specialised in the special needs children and those children might not have the highest academic success, but to see them develop as people, developing social skills and all of those qualities, is great to see.”
With Friday, their final school day, approaching Stella said her departure feels “slightly surreal”.
“There was a parent speaking to me about it in the playground this morning and it became quite emotional,” she said. “It’s getting closer to the time, so it’s becoming a bit more real, but we’ve been told that you don’t feel it until September until everybody is back to school and you’re not. I’ll miss the children, I’ll miss my interaction with the families, and I’ll miss my colleagues. I hope we’ll still have a connection with the school.”
Catherine also said that she will miss the children and her colleagues most of all, but is eagerly anticipating having more time with her family.
“I’m looking forward to having time with my grandchildren that I perhaps didn’t have with my own children. Having worked for 37 years it has been pretty non-stop. I’m looking forward to spending more time in my caravan, and having a bit of chill out time.”
Stella added: “I’m looking forward to being more involved with my granddaughter, who will be starting nursery school soon. It will be good to have some free time too.”
With their dedication to the school and the community over the decades, it will be free time well-earned for both.