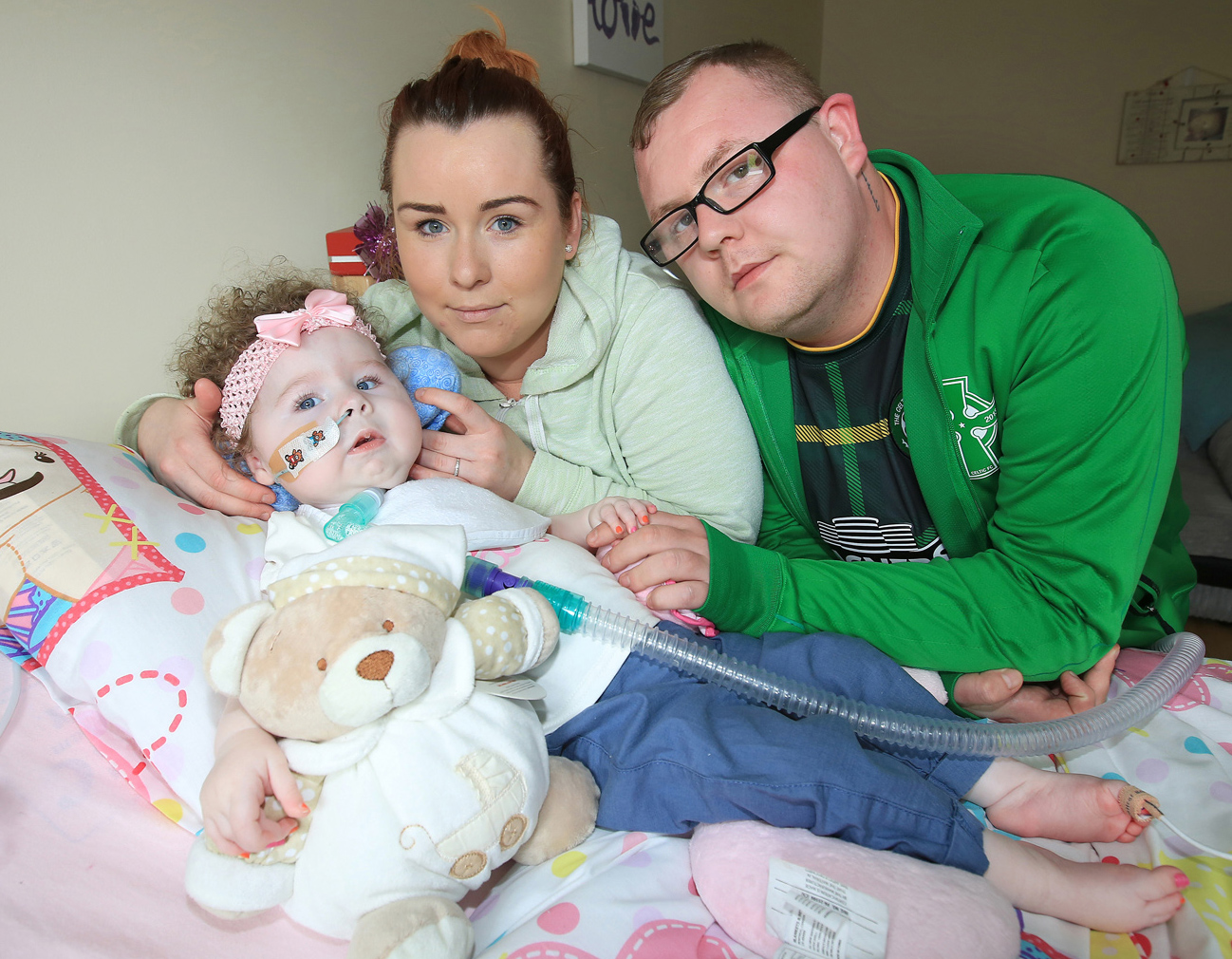 Caoilte Fitzsimons with her parents Robert Fitzsimons and Fiona Murphy. They've been left distraught after an internet troll directed vile abuse at their baby girl

An internet troll has targeted the social media account of a terminally-ill Belfast toddler just one week after the 22-month-old suffered a cardiac arrest.

The parents of Caoilte Fitzsimons, who suffers from the rare genetic muscle wasting condition spinal muscular atrophy (SMA), received the sick message on Easter Sunday as they were preparing to take the little girl to visit family.

The page, which has been set up to raise awareness of Caoilte’s condition and to raise money for research, was messaged with the statement ‘Hope your baby drops dead ha ha ha.’

Caoilte’s mum, Fiona Murphy, said that she “choked” on reading the message, which she has since reported to the police.

“It’s the first time that we’ve been targeted in that way,” said the Oldpark mum. “We’ve thought about it before after hearing some of the disgusting things said about Wee Oscar Knox and I thought I’d maybe prepared for it, but it came as such a shock.

“It was Easter Sunday morning so we were getting the wee woman’s dress on and getting ready to take her out, but after reading the message we didn’t even want to do anything. I just felt ill.”

Last week Caoilte, who suffers from the most aggressive form of SMA, had to be rushed to hospital when she went into cardiac arrest at her Ballycarry Street home. At the time her parents Rab and Fiona spoke about how stretched they were in trying to provide 24-hour care for their daughter.

The family have been cruelly targeted before. In August last year arsonists torched a specially adapted car outside the family home just hours before her first visit home in seven months.

A determined Fiona, who has fought doggedly for the best of care for Caoilte since her birth, says she’s reported the incident to Facebook and to the police.

“We’ve been through a lot recently and this is the last thing we needed,” she added.

“We don’t know how much the police can do but it’s with them now and we are just looking to get on with giving Caoilte the best care possible and try and enjoy what’s left of the Easter break.”

A police spokesperson said they were aware of an abusive message posted on social media but declined to comment further.