A new fellowship of the rings is born 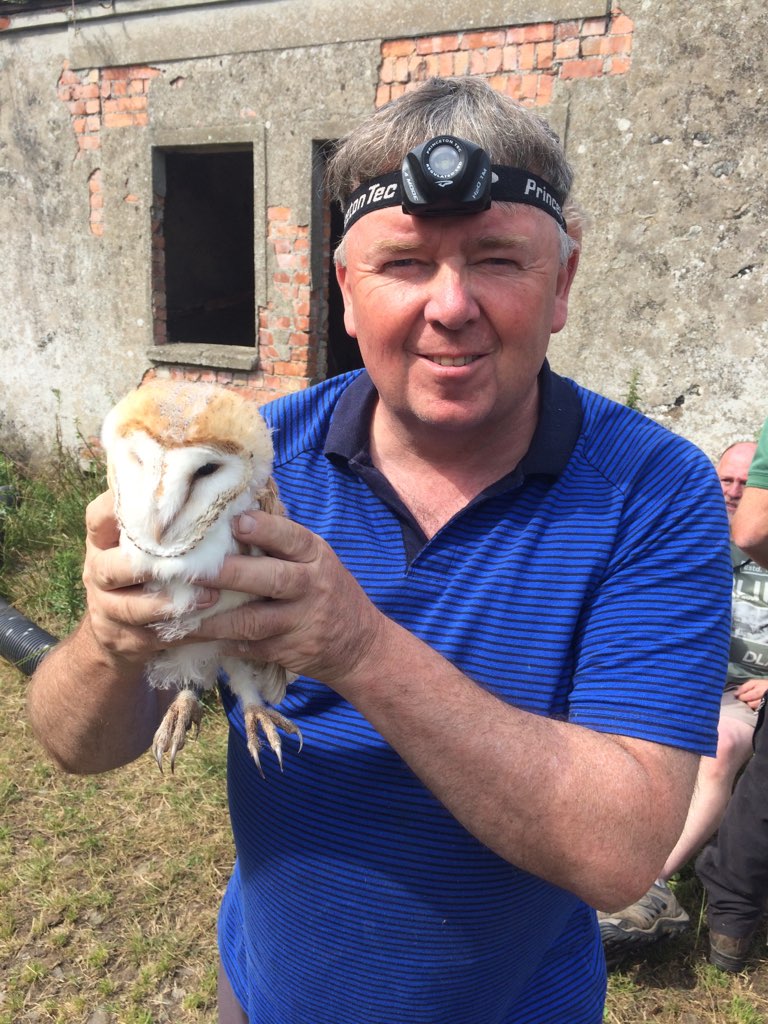 Aidan Crean holds one of the baby owls

UNTIL three months ago, local environmental champion Aidan Crean had never seen a barn owl – which is why he looks so ecstatic this week in this photograph.

Aidan is holding a baby owl in what was the culmination of a project that is breathing new life into the fortunes of this spectacular and incredibly rare bird.

A pair of barn owls – scréachóg reilige in Irish, meaning screecher of the graveyard – were found to be nesting in a derelict cottage on the shores of Lough Neagh, and – watched round the clock by another great West Belfast nature lover known to bloggers as Antrim Lens – the parents produced a record haul of five chicks. And just before the youngsters left the nest to take to County Antrim skies, Aidan led a team of birders to ring them. It was a marvellous occasion for all who took part. These participants now share a special bond, a fellowship of the rings not unlike that from the famous trilogy Lord of the Rings itself.

In April, Aidan was overjoyed to see his first barn owl when, after a three-hour stake-out of the old cottage with Dúlra, one emerged like a ghost from the window and out over the shimmering, moonlit lough. That night one of the most significant barn owl projects was launched – if the birds successfully bred, Aidan determined to ring the chicks, setting in motion a structured, monitored process to analyse the population of one of our most threatened birds, one which was on the verge of extinction in Ireland.

“Now that they have rings, these chicks have become dots on the map of barn owls in the world,” said a proud Aidan. “They are five ambassadors who will contribute to a national scientific study of these birds in Ireland.

“And I want the public to help us. These five birds will leave their nest by next Friday and set out to make lives for themselves. Their territory will be from Hannahstown right out to Lough Neagh. We want people to look out for them. If anyone sees one, we want to know.

“You’ll often see an owl in your headlights, and if you also see a flash of metal on their legs, then it’s one of ours. And we want to know about it especially if you see one of them hurt and in need of help.”

The team weighed and measured the chicks, discovering that four of them were male. “That’s four new territories for breeding barn owls next year,” Aidan said.

Aidan and pals – including Belfast Media Group editor Robin Livingstone – set out to ring the chicks in a slick operation.

“This was all about planning,” said Aidan. “We wanted to keep disturbance to a minimum so we had it all worked out beforehand.

“Everyone knew their job, be it climbing the ladder to the nest, weighing the birds, writing their details in the log book, putting on the rings. And everyone was caring and sensitive of the brood. We only spoke when we had to and were gone as soon as possible.

“Adult owls leave their chicks alone in the nest, so the two parents were sleeping in the chimney pot when we went to the nest in the rafters and they weren’t disturbed at all. Owls could teach us a lot – once the chicks are four weeks old the parents sleep in a different bedroom. They know they’ll not get any peace with the young ‘uns playing and constantly pulling at them because they want the bird equivalent of McDonald’s and Pizza Hut.

“The parents go somewhere else so they can get a good night’s sleep rather than stay with their teenage brood.”

The chick with Aidan is about 40 days old – owls incubate their eggs as soon as each is laid, unlike garden birds who wait until all the eggs are laid before they incubate to ensure they all hatch together – so the five chicks are all different ages and weights.

“This was pretty special for me,” said Aidan. “Despite a lifetime of birdwatching, I’d never seen a single barn owl until this year. To see five chicks in a single nest is phenomenal. This is one of the biggest broods ever recorded, and shows that the birds here are healthy and finding plenty of food.”
The old abandoned cottage is on land belonging to the owner of Randox Laboratories Dr Peter Fitzgerald, who is said to be delighted that barn owls have chosen to nest there and is backing the study of the chicks.

Aidan added: “There may be only a couple of pair of breeding barn owls in the whole north of Ireland, so these chicks are precious and represent hope that they can make a comeback. A big congratulations is due to everyone concerned.”