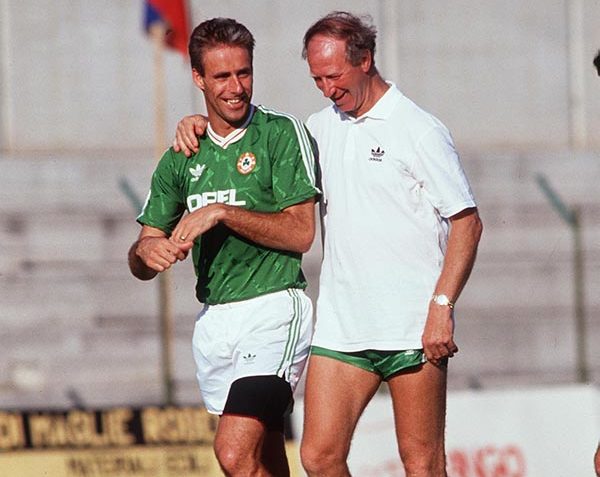 Jack Charlton with his captain in 1990, Mick McCarthy

TRIBUTES poured in following the passing of Jack Charlton on Saturday.

His captain at Italia 90 and successor as manager, Mick McCarthy, spoke of his profound sadness at the passing of his former boss.

“I loved the bones of the man, I am devastated with this news and my heart goes out to Pat and the family,” said Mick to the FAI.

“Jack’s passing will touch Ireland, England and the football world but the loss to football will be felt in Ireland more than anywhere else.

“English fans will always remember Jack as one of their World Cup winners in 1966 but what he did with Ireland will, I suspect, mean even more to our fans and the country.

“He turned a really good team into a team that qualified for tournaments and made an impact at them. He changed my life, he changed everything for all of us who played for Ireland and just look at the memories we have.

“We will always have Stuttgart and Genoa and Giants Stadium thanks to Jack. That’s how we will remember him, with a great big smile on his face. I know this is a sad day but we will remember the great days as well.

“I did speak to him very briefly the day after his birthday but it was difficult due to his health. I told him I loved the bones of him that day and I always will.”

As news filtered through on Saturday, Irish fans were quick to pay their own tributes to a man who gave them the greatest days of their lives, taking them on an incredible journey over 10 years when the team reached dizzying new heights.

“He was an iconic figure and very charismatic - a great leader, basically.

“I had the pleasure to have met him on a number of occasions and each time he was always very pleasant, always making times for the fans. I was a bit gutted when I heard the news.”

Charlton was a popular figure with the fans thanks to his down-to-earth nature. Always generous with his time, he would be at home in the company of the general public and out meeting those who followed his team everywhere.

“In the days when he would have been in the Bagott Inn in Dublin, he was always the centre of attention and controlled everything, just an iconic figure,” recalled Paul.

“What he did for Ireland was just unbelievable. He really kick-started the whole thing of the whole of Ireland getting behind the team because before, international football was low key with Ireland.”

Paul also had his own memories of the man who always seemed to go that extra mile in the company of others, recalling a meeting at Charlton’s book signing in Eason’s in Belfast: “Mick McCarthy had just taken over at the time and I asked him if he thought Mick’s tactics would be similar to his.

“He said: ‘No not at all’ and proceeded to produce a permanent marker, cleared the whole table and was writing down all the moves the players had to make when it was kicked long by Packie, what corner that had to run into. He was writing all of this in permanent marker on the table and I remember the security fella who was standing beside him looking on at this in shock. He ended up turning it into a tactics board you would get in a dressing room.”

The passing of Charlton left all in Ireland with feelings of sadness and pride as they recalled those heady days in Stuttgart, Genoa and New Jersey.

He left a mark on Irish soccer that will never be forgotten and the fans have paid their own tributes and undoubtedly will do so again when the team returns to action.

“We were very unlucky not to get through to the European Championships in ‘92 and ‘96 too, but he’s left us with some great memories.

“It’s sad for the fans who were about at that time and had the pleasure of meeting him. He was just a great man who was so charismatic, it was unbelievable. He always had time for you and would sit and explain tactics with you. It’s just a sad day for us all.”