A thing of beauty among the waste ground 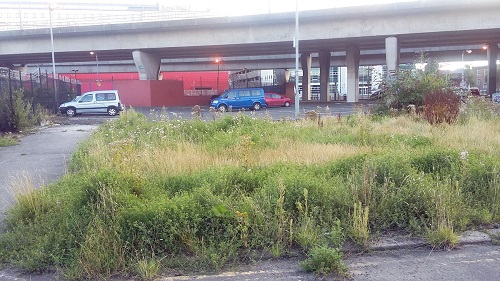 BEAUTY AND THE BEAST: Who would have thought that a painted lady butterfly, right, would end up among the yellow ragwort in Tomb Street

It’s funny how the wonders of nature can lift your spirits.

If you’ve had a hard day at work or if the family’s testing your patience, even one of creation’s smallest, lightest creatures can brighten your day. And sometimes in the most unlikely of places.

This wee patch of overgrown greenery, right, sits in a forgotten corner of a car park beside the main Post Office at Tomb Street in Belfast city centre. You probably wouldn’t be too far wrong if you thought that the only creature living in this litter-strewn square would be the ubiquitous rat.

But Dúlra happened to be passing it the other day and noticed a butterfly landing on a stalk of yellow ragwort. That in itself was nothing to write home about, but he sensed by the flash of orange that this was no ordinary, common butterfly.

And so he bent down for a closer look. At first the butterfly’s wings were closed, but then they opened to reveal in all their glory that this was in fact a painted lady – a butterfly that had flown all of 3,000 miles from Africa to arrive at a patch of neglected land at Tomb Street in downtown Belfast.

In fact, we can’t tell if this butterfly itself was born in North Africa this spring or if its parents were – but it will constantly fly north until our flowers die – then turn around and try to make it back to Africa.

Some actually fly the 9,000 miles to the Arctic and back in a year, breeding all the while.

And September is a good month to spot them as they arrive in Ireland late in the year – sometimes in small numbers and in other years in flocks as thick as clouds.

The painted lady – áilleán in Irish – is attracted to rain, flying into storms – rain somehow activates more egg production and that must be one of the reasons why they often end up in Ireland!

The second sight that raised Dúlra’s spirits was at a quarry at the side of Cavehill. He was dandering along this week when a kestrel swooped in front of him, high in the quarry but at head-height to Dúlra. Then another, larger kestrel joined it – the female.

The late morning sun was still low in the sky, and it radiated off the birds’ backs, throwing up a colour not unlike that of the painted lady – one of the most beautiful imaginable – a deep crimson or russet

The two birds played with each other like they were gymnasts, their wings almost touching. These were two parents who had most likely just raised a brood in the quarry and were celebrating their freedom just like a couple whose kids had finally left for college – what we aptly call empty-nesters.

Kestrels are getting rarer as they are being killed by feeding on poisoned vermin. But here on the side of the Cavehill – as on Colin Mountain – they still enjoy a sanctuary where they can thrive.

And it's certainly a sight for sore eyes.