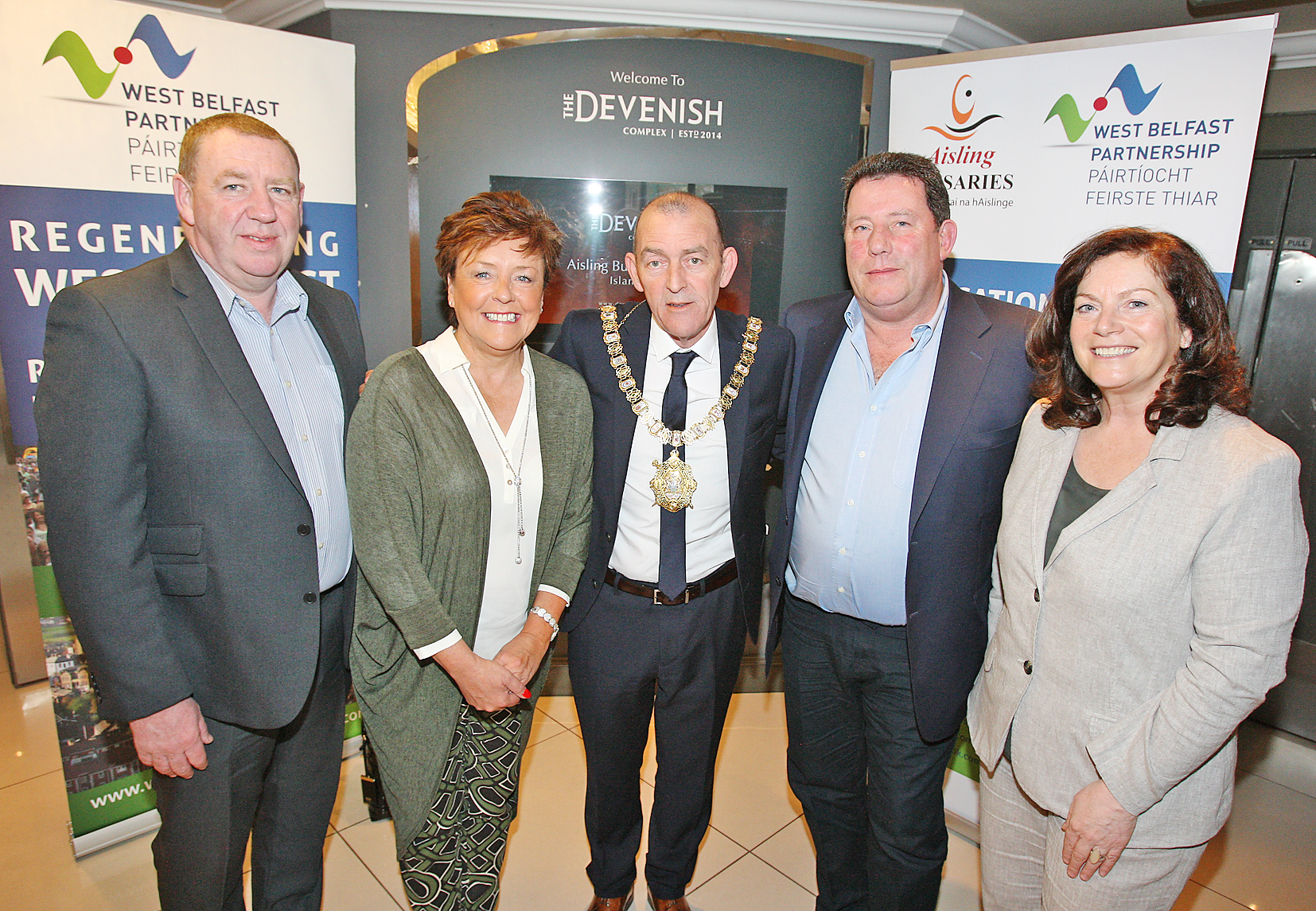 Gerry McConville of the Falls Community Council, Geraldine McAteer of the WBPB, Marie Clarke, Joe Clarke and the Belfast Lord Mayor, Arder Carson, at the Finaghy launch of this year’s Aisling Bursaries

The 2015 bursaries were launched at the Devenish Complex, Finaghy, with local business leaders, educators and bursary sponsors gathering to celebrate this year’s programme.

The Aisling Bursaries are an education grant scheme delivered by the West Belfast Partnership Board, enabling students to access further and higher education and training.

Chief Executive of the West Belfast Partnership Board, Geraldine McAteer, said they make a real difference to the lives of the young people they support.

“We believe in the fundamental need to put education at the heart of regeneration – a sound education, good training and skills development contribute to the personal development of young people, to their confidence, their sense of fulfillment and personal growth, and to achieving their aspirations and goals in life,” she said.

“But significantly, by acquiring the skills and competencies that modern businesses need, young people will help drive the economy and also local economic and social regeneration.

“But the value of the Aisling bursaries also lies beyond their significance in financial terms: in acknowledging talent and effort, in supporting young people’s will to pursue higher education, the bursaries give both encouragement and a sense of self-worth to those who receive them. “Indeed all of us are best able to reach our potential when we are given heartfelt and sustained encouragement”.

This year Joe and Marie Clarke are supporting the Pádraig Ó Cléirigh Aisling Bursary Scholarships, named after Joe’s brother Pádraig, who was shot dead on his doorstep in February 1992.

The Padraig Ó Cléirigh scholarship is being match-funded by An Nasc, the Irish language community company.

Pilib Ó Runaí, a founding director of An Nasc, said it is fitting the Irish language activist will have a scholarship in his honour.

“Pádraig Ó Cléirigh represented the very best of Belfast and when shot dead in a sectarian attack at his home in 1992 was serving on the national executive of Conradh na Gaeilge,” he said.

“This scholarship, backed by the Clarke family and by An Nasc Irish language community company, will provide £10,000 to enable ten students from Coláiste Feirste, or going on to study An Ghaeilge at university, to obtain a scholarship.

“If he had lived, Pádaí Mór would have been thrilled to see the rapid growth of the Irish medium education sector and it’s fitting that these scholarships will carry his name.”

Geraldine McAteer also welcomed members of the Brownlee family, Colette and Anne, who launched a bursary in memory of their father and mother, Mary and James Brownlee.

Some bursaries are specifically for those participating in vocational training or a subject specific course of study relevant to the sponsor’s area of business or interest. All applications are considered, with special consideration given to candidates who have significant barriers preventing them from realising their full potential through education – for example, economic or family circumstances.